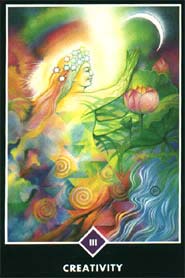 Based on the transcendental game of Zen, the Osho Zen Tarot is a non-traditional deck of 79 cards. There are many changes that suit the Zen theme, including one extra major arcana card for Osho, and four suits of fire, clouds, water, and rainbows. The cards span the range of human experience, from the stunningly beautiful to the ridiculous and mundane.


Card Images from the Osho-Zen Tarot 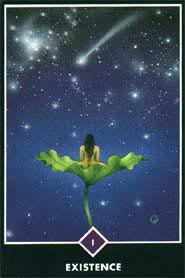 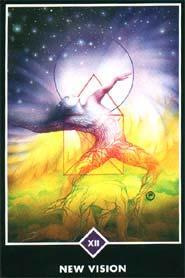 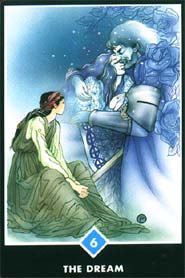 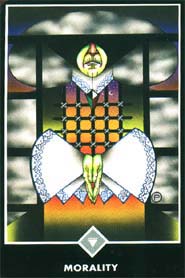 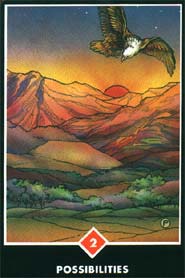 The Osho-Zen tarot card deck is a wonderful and highly evocative spiritual tool. These cards have a way of stirring the intuition upon first glance and promptly extracting the truth from any situation in question. My suggestion? Keep an open mind and practice regular use of these cards. I have found them to be a wonderful guide on my Spiritual Journey.

The ultra-colorful illustrations tend to evoke strong images and bring immediate clarity and accuracy to my readings. This is especially important since I must maintain a high level of excellence in my professional psychic tarot card business!

There is a very special genius at work here: unlike most decks I've run across over the years, Osho-Zen has a silly, yet intelligent sense of humor in its illustration of so-called negative cards like "exhaustion" and "schizophrenia". I think part of the objective behind the humor is to help us poke fun at ourselves, and not take every single thing so seriously!... to live in the moment.

The Osho-Zen deck comes with a companion book honoring Eastern Philosophy while acting as a reference for each card's interpretation. Osho's visual and written text may indeed be a breath of fresh air for those who need a change from the more Westernized decks, which almost always boast cards like the "Devil","Death" and "Hanged Man"(The symbolism commonly associated with the "Hanged Man", for example, is that of Jesus Christ and his cross Osho contains thought-provoking Eastern ideas like the one depicted in "No-Thingness". You'll understand what I mean once you read the card's description in the book.

Even if I weren't looking to this deck as a means of spiritual divination; if I just wanted to do casual non-professional Tarot Readings, I still would have made it a point to get the Osho-Zen deck because of the amazing artistry! The art work is simply incredible. Each card is a vibrantly colorful feast for the eyes. I have seen many many decks throughout my years as a professional Reader and I still find this deck to be one of the most, if not THE most beautiful I've ever seen!

This deck, created by Ma Deva Padma, sat unreviewed on my shelf for nearly 8 months, because it is one of the most difficult decks to try and review that I have come across. It has good point and bad points, but I doubt I will ever come to a definite personal conclusion about it: The most I can do is outline my thoughts on it so far, and describe the deck itself, letting the reader judge for themselves the quality of the deck and whether or not it is worth them obtaining it.

Despite at first seeming very theme-less and non-militant, it becomes apparent after reading the accompanying book that the Tarot has been used to convey the teaching of the now deceased Zen Master, Osho. As such, the cards' meanings are described in a way that makes you feel you're being lectured, and often the things said about certain concepts or actions seem like sweeping statements, and statements which not many people would agree with unless of the Osho Zen persuasion belief-wise in the first place. An example of one of these statements can be found in the Lovers card description: "Sexuality is very animal." But this said, it is also safe to say that these statements are based only on subjective belief, as most statements like this are. It is therefore understandable that not everybody will accept them.

Luckily for those who do not like the Osho-Zen approach to the cards' meanings, the book also includes very beautiful descriptions of the cards and their meanings in a more general sense. These descriptions act to bring the reader 'into' the card, often explaining what the figures in the cards are feeling and thinking. I found this approach helped immensely when reading the cards and figuring out what the images were trying to convey. Often in the book you will find a story about the Buddha which perfectly illustrates the meaning of the cards further, and serves to inform a bit more about the Osho Zen tradition and the life of Buddha.

The deck itself deserves great praise, as each card is a stunningly beautiful piece of artwork. It is one of the few decks I bought mainly for the art. You can very easily just sit and look through this deck over and over again and not get bored of it. The artwork does vary however, from delicate water-colour pieces to bold geometric designs, and then to more cartoon-like images. This is not off-putting though, and serves to add variety to the deck.

The Major Arcana, whilst keeping the traditional meanings and ordering, often use different imagery. It certainly came as a shock to me to find that what is usually the High Priest, and is represented by a religious figure, had become No-Thingness, represented by total blackness! You may be confused at the reference to No-Thingness and this is because I have yet to mention the changed titles of the Majors. Interestingly, nowhere in the book does it give the traditional titles, but because the traditional ordering is kept is it easy to work out which card is traditionally which. In this deck the Majors are as follows:


There is also one extra Major Arcana, the Master, which shows what one can become when they finally break from the never-ending cycle of birth-death-rebirth (Fool-Completion) and find Enlightenment. Not surprisingly, this Master card is illustrated with a painting of Osho himself.

Whilst the new titles of the Majors seen daunting and not well-chosen when seen without the images, the images themselves convey the meaning wonderfully and complement the titles beautifully. These images are very spiritual and often humorous, conveying the meaning in quite an anecdotal way. For instance, the Innocence (Sun) card shows a white-haired old man, laughing joyfully, totally engrossed in the rather predatory-looking praying mantis which is perched on his index finger. Such images touch the heart, and often one finds oneself 'aw'-ing over the cards!

The Minors are changed quite considerably. The titles, e.g. 5 of Swords, are not shown on the cards, and instead a word conveying the meaning is on them. The suits are Fire, Water, Clouds, and Rainbows instead of Wands, Cups, Swords, and Pentacles respectively. On the Minors can be found the number of the card inside a small diamond of the suit's colour: Either grey (Clouds), red (Fire), blue (Water), or rainbow (Rainbows). Like the Majors, the images on the Minors convey the meaning very well, but I doubt one could gain meaning from some of them if they did not have the keywords on them. These images, again, are often very humorous, anecdotal, and some very symbolic. For instance, the 8 of Water, 'Letting Go', portrays a cluster of green leaves over a pool, and from one of the leaves is dripping a small droplet of water.

The Court cards do not bear titles on the cards themselves either. Instead, inside the coloured diamond representing the suit, is an arrow pointing in one of the cardinal directions. North is King, East is Knight, South is Queen, and West is Page. This is difficult to get used to at first, but the Court cards are improved greatly by the keywords on them. It is not uncommon for the Courts to be illustrated without actual people, as the courts in this deck tend to convey concepts more than people. The backs of these cards are gorgeous: Very earthy and oriental. Not reversible, but it is doubtful that one could tell which way up the card was anyway as the back design is not of anything specific.

Overall, this is not a deck I would suggest for beginners or people who find little value in the philosophies of Osho or Zen Buddhism. However, it is a stunningly attractive deck, and one that should have a place in the home of the collector. Reading with it could prove tricky though at first, and it is a deck aimed more at healing and spiritual growth spreads that at your standard Future readings.

I first saw this deck years ago not long after it first began gaining some popularity among other tarot readers. A friend of mine bought the deck and raved about it. She ended up not working very well with it and passed it along to another friend who has done wonders with it. The images in this deck are beautiful and stunning. There is a psychology behind them that, when reading with them, is direct and honest. They tell it like it is and they don't pull any punches. The artwork is beautiful and expressive and they are simple to read. From the time I saw this deck for the first time and experienced my first reading with it, I knew I had to have it.

I have never experienced a more honest deck of cards used for divination. I think that it takes a particular type of personality to work with these. You must be prepared to be told what you need to hear and not just what you want to hear when dealing with the Osho Zen. But if you are prepared to do some serious soul searching yourself or helping someone else do the same, these cards are an ideal tool to use toward that goal. Whether a reading for someone else or yourself, I highly recommend this deck for anyone who is looking for something a little different from a traditional deck.