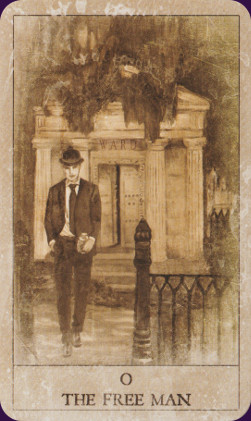 The Hoodoo Tarot is a 78-card deck centred in Hoodoo traditions, reflecting the needs and interests of Rootworkers. It celebrates an often misunderstood aspect of Black/Indigenous culture in North America, and features both historically significant contributors to Hoodoo, and everyday people in contemporary situations. Packaged as a box set including a 148 Page guidebook.


Card Images from the Hoodoo Tarot 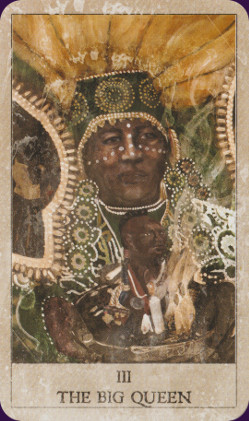 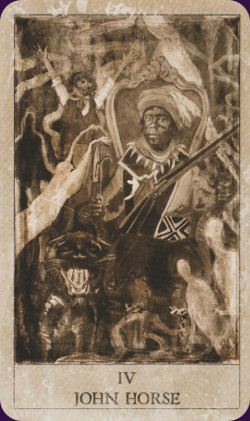 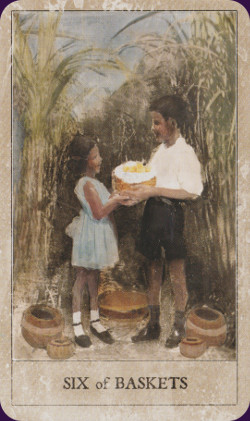 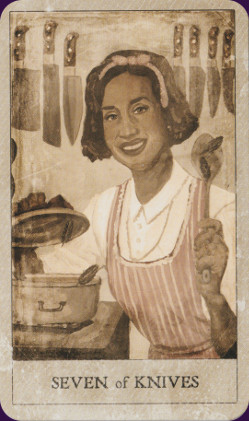 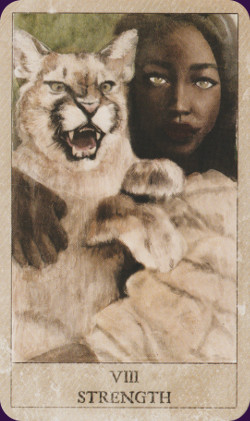 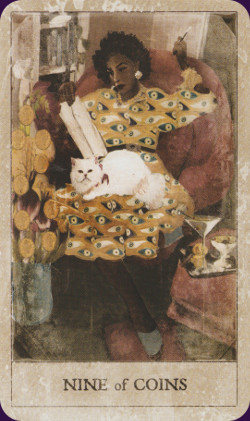 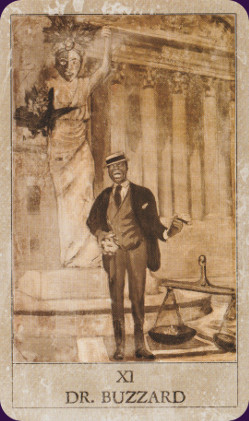 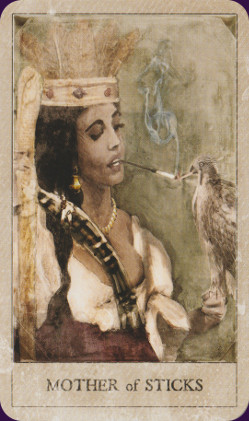 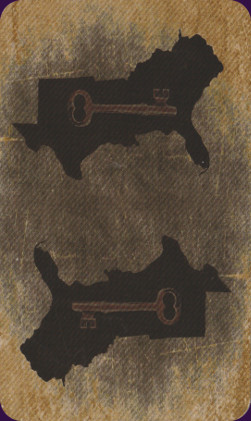 The Hoodoo Tarot is a 78 card deck by Tayannah Lee McQuillar, and illustrated by Katelan V Foisy. McQuillar’s first book ‘Rootwork: the Folk Magic of Black America’ described Hoodoo as ‘folk magic’, an error which she emphatically corrects on the first page of her guidebook. Hoodoo is a culture, a body of distinct knowledge and information, a rejection of white supremacy in all its forms, and an affirmation of inherited knowledge and information. Hoodoo is a rich amalgam of magic, religion, and herbal wisdom from many cultures – predominantly African, Native American, Indian, and European. Many other cultures came to America as slaves or indentured servants, and their knowledge too has fed into Hoodoo and Rootwork. It is important to establish this information here so that you understand the construction of the deck and information that this tarot imparts. This is a complex deck which calls upon many aspects of Hoodoo culture to inform the Seeker, guide them, and answer their questions.

The Hoodoo Tarot does set out to achieve certain objectives which I will briefly summarise:

- it aims to pay homage to Hoodoo practitioners and Rootworkers

- to demonstrate the unique qualities of Hoodoo as distinct from Voodoo; acknowledge sacred sites, the flora, fauna, and other natural phenomena from America’s Southeast

- and increase awareness of the fact that both Black and Indigenous history are inextricably intertwined due to shared experiences and bloodlines.

The Hoodoo Tarot takes a traditional approach to it’s composition, and is loosely based on the Rider-Waite – Smith deck, but it also has significant departures which give it a unique identity. The Hoodoo Tarot is structured around the concept of extended family with the Major Arcana representing The Elders, while The Family is represented by Court cards, and the broader Community is illustrated in the number cards of the Minor Arcana.

This is in line with moving away from predominantly white/ Anglo-European titles and identities – The Fool becomes The Free Man, Black Herman is The Magician, Miss Ida is The High Priestess, The Big Queen is The Empress, John Horse is The Emperor, Bishop CH Mason is The Hierophant, Courting is The Lovers, Railroad Bill is The Chariot, Strength is the only card that retains its original name, Dr Grant is The Hermit, Aunt Caroline is The Wheel of Fortune, Dr Buzzard is Justice, Gullah Jack is The Hanged Man, Ancestors is Death, Father Simms is Temperance, Miss Robinson is The Devil, The Big House is The Tower, The Grandchildren is The Star, PA is The Moon, Big Mama is The Sun, Dem Bones is Judgement, and finally, The Garden is The World.

The Minor Arcana is divided into four suits of 14 cards each, with 10 number cards and 4 Court cards in each suit. The suits are Sticks (Wands), Baskets (Cups), Knives (Swords), and Coins (Pentacles) – implements and tools which are workaday objects recognised by most cultures, but which also have esoteric significance to Hoodoo, and Rootworkers.

The Court cards are Mother, Father, Daughter, and Son – an interesting inversion of the usual Court structure, where the King/Father is generally implied to be the head of the household. The impression given in the Hoodoo Tarot is of strong equals each ruling their respective domains.

The cards measure 117 x 71 mm – which puts them well within the standard size range for tarot cards. They are of course both broader and longer than a deck of playing cards, but not so outsized that they can’t be handled easily.

The card stock is good, light and reasonably flexible, without being flimsy, or in danger of bending, creasing or snapping if you shuffle your cards with a heavy hand. The deck is rather compact to hold, in contrast with some decks which are significantly bulky due to the heaviness/density of the card. The finish is low gloss and untextured – the cards do not stick together, rather they flow smoothly and are very easy to shuffle. The print quality is excellent – the subtleties of the images are clearly reproduced, without colour bleeds, without blurring or misprints.

The artwork by Katelan V Foisy has a vintage feel to it and recalls fading photographs and distant memories. The images are created through the use of mixed media and photos. Foisy herself is a tarot reader who obviously has deep connections to, and a great feel for the imagery that she produces.

The artist’s pallette is subtle – tea-colours such as sepia and moss green, along with soft lavender, delicate blue, dove grey, with occasional flashes of red, scarlet, and orange which adds a distinct visual pop. The entire effect is something reminiscent of old cabinet cards, or photographs left to fade in the sunlight.

The design on the back of the cards shows mirror images of a black silhouette of the southern United States, with an ancient key smack dab in the middle of the map. The background is textured and looks like hard-worked old denim.

The cards and the guidebook come in a long thin box set. The cards are divided in two and packaged separately, sitting in two separate wells in a slide out tray, with the guidebook lying on top of them. The box cover is heavy duty, solid cardboard, with a glossy finish. It is illustrated with images from the deck well as extensive information about the Hoodoo Tarot, and of course publisher’s information. While this box set is not super bulky and could easily be slipped into a backpack or tote bag, it is a little large to carry around in a shoulder bag. The packaging will give good protection to the guidebook and cards it contains, however careless handling or subjecting the box to pressure or weight will result in it sustaining damage – it is cardboard after all.

The 148 Page guidebook is written by The Hoodoo Tarot’s conceptual originator Tayannah Lee McQuillar. It is heavy on information, and utterly fascinating. The Introduction gives an overview of what Hoodoo is, defines in-depth McQuillar’s objectives in creating the deck, discusses ‘The Origins of Hoodoo’, and outlines the types of divination which are traditionally used in Hoodoo – cleromancy, cartomancy, astrology, augury, and oneiromancy.

The second chapter, titled ‘Getting to Know the Hoodoo Tarot’ discusses the structure of the deck, the tools used to represent the suits of the Minor Arcana, the choice of images, plant associations, and Bible quotes. It also discusses upright and reversed Community (Court) cards and how you, the Seeker, may choose to interpret these.

Chapter 3 is about Hoodoo divinatory layouts, and includes sample readings. Five tarot spreads are included – an ancestor spread; a spread to uncover possible hexes, curses, jinxes and other negative magic/spells which may have been laid against the Seeker; a layout to guide the Seeker if they are looking for a teacher or mentor; and a relationship spread. Each of these layouts is relatively simple but answer complex questions and are designed to give in-depth guidance.

The chapters regarding the cards themselves have been separated into three distinct bodies: The Elders or Major Arcana, The Family or Court cards and The Community or Minor Arcana/number cards.

Each major Arcana card has its own mini chapter featuring a small black and white reproduction of the card. The Hoodoo Tarot title is given prominence and its corresponding classic tarot title is indicated beneath this. Each card is accompanied by a biblical quote, a plant whose energy corresponds with that of the card, a description of the image and relevant information about what is being depicted, a divinatory meaning, and a set of questions, quotes, directions, and advice. It is these brief points, the questions, quotes, directions and advice which are the real cherries on the cake – they are given in plain language, direct and unambiguous, and give piercing insight into the true voice of the cards. The Major Arcana cards do not have reversed meanings, it is up to the Seeker to determine any negative energy which may be in play.

The Family cards have a plant correspondence, a description of the image, and a meaning which focuses on the qualities of a person rather than a situation.

The Community cards each have a page which includes a description of the image, and an upright/positive and negative/reversed divinatory meaning – these generally focus on the details of everyday life.

These tarot interpretations closely follow standard divinatory meanings, but also incorporate new ideas and possibilities for interpreting the cards. Anyone familiar with classic tarot definitions would be able to work this deck with ease.

On a personal note, and I don’t usually include this in my reviews, I found this deck to be extraordinary. The moment I unpackaged the cards they jumped to life in my hands, and they have given remarkably insightful and consistent readings. If there is information which they wish to impart these cards do so with a will and single-mindedness I have rarely encountered with other decks. I acknowledge that tarot decks tend to choose their owners, and with all the will in the world some decks, no matter how much you love them, just don’t want to work with you.

This is a pretty amazing deck, and if you are an experienced tarot reader with an interest or experience in Hoodoo and Rootwork this is the deck for you. If you are relatively new to tarot reading and with a little experience under your belt you will still find this deck fairly easy to work with. The symbolism and imagery of this deck is quite unique, and therefore probably not recommended for absolute beginners. If you are looking for a deck which doesn’t mince words and gets right to the point this may be the deck you are looking for. If you are looking for a tarot deck which reflects the Black and Indigenous historical and current experience this is a deck well worth looking into. Overall an impressive and powerful tarot.