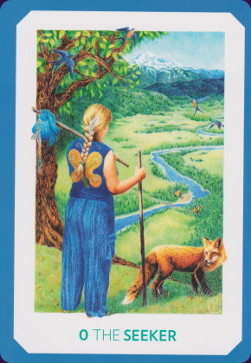 
Card Images from the Gaian Tarot 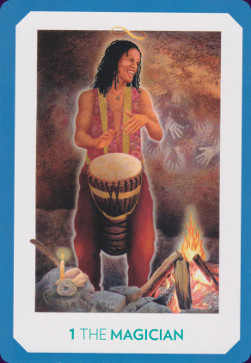 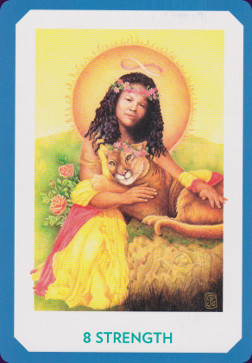 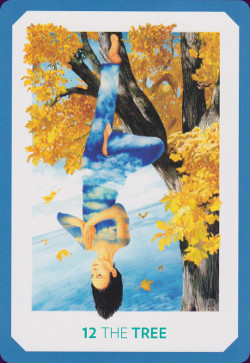 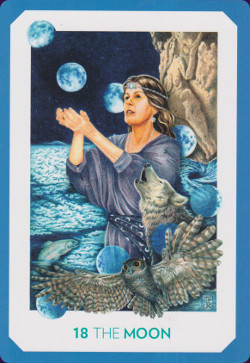 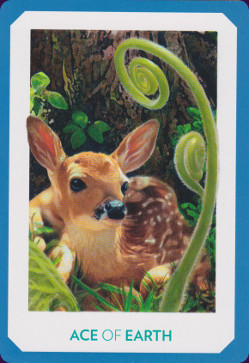 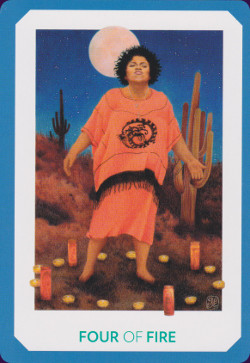 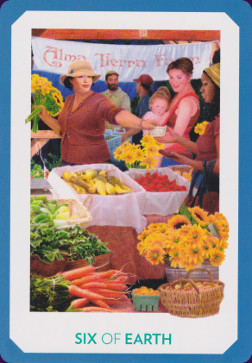 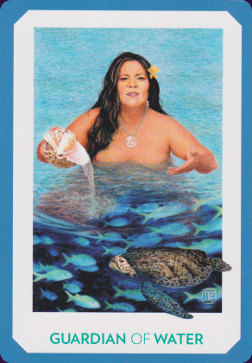 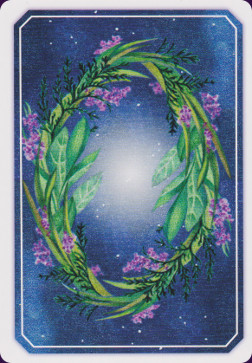 The Gaia philosophy views our planet as a living organism, and that all living creatures are part of a complex web, the cells of the body, that make up Earth. Practitioners of Gaian philosophy typically strive to live as harmoniously as possible with the Earth, reducing their impact on mother nature and minimising negative interactions with other living beings including animals and the environment. The Gaian Tarot is based on Gaian spirituality – the belief that the earth is not only a living organism but that it has a complex relationship with the cosmos. In line with this the Divine is not seen as intellectually annexed or separate, but immediate and all pervasive.

The Gaian Tarot is a 78 card deck depicting people practicing spiritual living/lifestyles in the modern world, rather than in an idealised past. Here we see everyday people experiencing the mystical and spiritual through conscious living; shopping, dancing, writing, hiking, making music and so on. People also take time out pilgrimages to holy and spiritual places, and to create magical rites. Interspersed with all this are many depictions of nature's ambassador animals, and the elements in action.

The deck consists of 22 Major Arcana cards and 56 Minor Arcana cards. The Major Arcana follows a standard ordering set by Arthur Edward Waite, however many of the cards have new titles that are more in line with the sentiment of the deck. The Empress is now known as The Gardener, The Emperor has become The Builder, The Hierophant is The Teacher, The Chariot renamed The Canoe, The Hanged Man becomes the Tree, The Devil is reimagined as Bindweed, The Tower becomes a Lightning, Judgement is now The Awakening, and of course The World is Gaia.

The 40 number cards of the Minor Arcana are no longer delineated by Pentacles, Swords, Cups, or Wands, but rather through the elements of Earth, Air, Fire, and Water. Each suit features symbols commonly associated with their element. Air/Swords depicts feathers, birds, clowns, butterflies, books, pens, and flutes. The suit of Fire/Wands has hearths, candles, torches, and bonfires as its primary symbols. Water/Cups depicts fish, rain, rivers, boats, wells, shells, and beaches as representative of its element. Earth/Pentacles is represented by drums, crafts, mammals, forests, and gardens.

The 16 Court cards of the Minor Arcana are no longer represented by peoples of a royal court, instead they correspond to stages of life – childhood, new adulthood, mid-life, and old age. The titles are Children, Explorers, Guardians, and Elders and these roles are no longer gender specific, so two males and two females feature in each tier of the ‘court’.

The cards in this deck measure 100 x 145 mm which makes them considerably larger than many current tarot decks, however they are not outsize and difficult to handle. The cards are made of excellent quality card stock which is light and very flexible, but not flimsy or prone to creasing or breaking. The finish on the cards is smooth and glossy which facilitates easy shuffling. The cards have a nice weight to them which makes them easy to handle.

The print quality on the cards is superb. These cards have finally detailed and densely textured images which are beautifully reproduced. The artwork is quite mysterious as it appears to be a combination of painting, and digitally enhanced photographs. The artist's palette is naturalistic, and as a consequence very broad. While there are some fantasy elements these are only very occasional and for the most part the images depict the everyday world in all its technicolor glory.

The artist's style is a combination of realism and idealised reality... With the central focus of the pictures having a curiously grainy texture to them, and the backgrounds featuring some of the tell-tale marks (uniform colouring and mistiness) of digital enhancement. each image has a broad white border within a China blue border. The number and title of each card is given at the bottom in an aqua coloured plain font.

The image on the back of the cards is reversible, and features a wreath of herbs commonly associated with blessings – lavender, sweet grass, sage, and cedar. This image also appears in The World, and The Star. It is intended to create a portal between this world and the world of the invisibles.

This box set comes from Schiffer Publishing which is synonymous with high-quality products, and this tarot is no exception. The cards and guidebook come packaged in a solid cardboard box which is built to last. As always the lid has a little ribbon loop to help you open it, and is held shut with magnetic clasps. There are ribbon hinges which keeps the lid in place and prevents it from flopping open. The cards are placed into 2 separate wells, the guidebook on top.

The 184 page guidebook is written by Joanna Powell Colbert, who is the creator and illustrator of the Gaian Tarot. This is a comprehensive guide to the Gaian Tarot. The Preface introduces the reader to the concept of Gaia, as well as giving some background to the creation of this deck, and outlining its structure. The book is essentially divided into two sections, the first of featuring the Major Arcana, and the second the Minor Arcana and layouts.

Each Major Arcana card has its own mini chapter – starting with a descriptive subtitle and a paragraph outlining the details and actions depicted in the illustration. This is followed by a 'divinatory meaning’ intended for upright cards and a shadow reading for either reversed or poorly aspected cards. Here the divinatory meanings differ substantially from traditionally assigned meaning in that they focus almost exclusively on one's inner journey and personal development will stop this is not to suggest that these meanings eschew engagement with the external world, far from it.

Rather it encourages the Seeker to connect self to Gaia using time-honoured spiritual and magickal techniques. One is not only given advice, but also guidance and activities which may be beneficial such as meditation, mindfulness, reflection, self-care, dance, and engagement with nature.

This is followed by information to “Deepen Your Understanding of…” Which includes Themes – a collection of keywords, Symbols – an explanation of some of the symbols depicted in the illustration, Journal Questions – a collection of up to a dozen questions for reflection in one's personal/tarot journal, and an Affirmation – a single line of meditation relevant to the meaning of the card.

The Minor Arcana cards are grouped by number rather than suit, and each card has a single page of information. The Minor Arcana micro-chapters give a brief description of the card’s image, an upright and shadow divinatory meaning, and an affirmation. The final chapter – Working with the Cards features 11 spreads from simple three-card draws to complex 10-card layouts.

If you are seeking to deepen your connection to Mother Earth, Gaia, then this is the deck for you. If you are a Seeker in search of self then the deeply spiritual nature of this deck may be just the thing you are looking for. While the Gaian Tarot moves away from traditional external meanings that focus on concrete actions in the material world, its focus on spiritual development and creating a powerful connection with the living essence of our planet makes this an unusual and potent tarot.