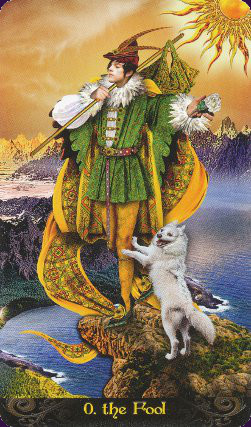 The Tarot Illuminati has 78 vivid, digitally illustrated cards. The cards are complex, saturated with colour, and enhanced by the lack of borders. The set also includes a companion book written by the very knowledgable Kim Huggens. Buy yours now from Amazon.com.


Card Images from the Tarot Illuminati 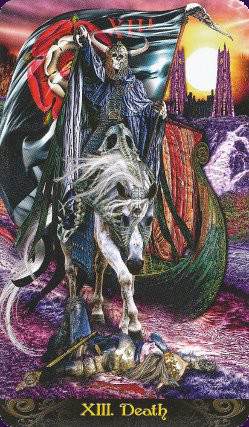 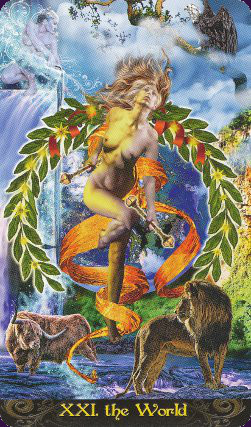 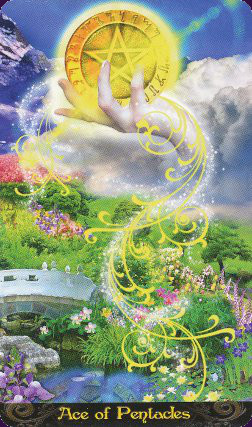 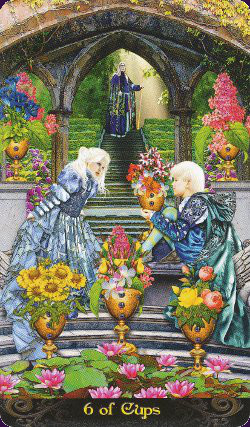 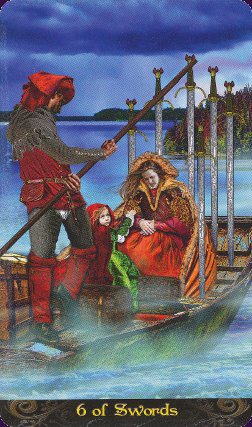 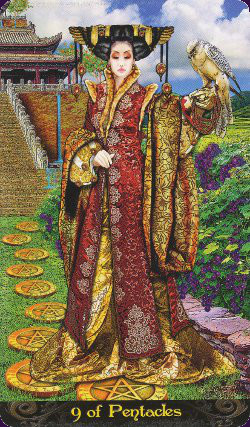 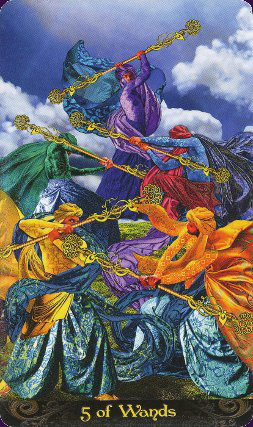 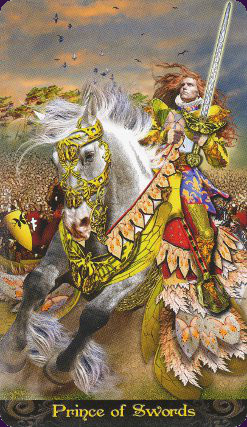 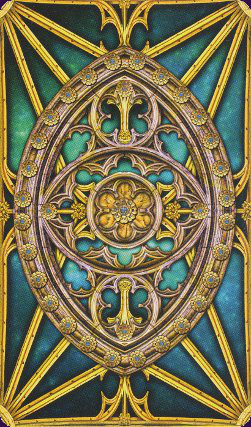 When I first noticed this new deck online, the name completely turned me away. Not a fan of “secret societies”, I recoiled at the notion that the infamous Illuminati were somehow connected to the design, production or distribution of this deck. This association triggered a stubborn determination on my part not to acquire it. Regretfully, I suspect this might be an issue for many prospective buyers.

I kept however returning to the deck for perusal because it was just so darned lovely! In the end, I broke down and ordered it. As soon as the deck arrived I opened it with anticipation and it honestly didn’t disappoint. Sometimes Tarot decks look so much better online but not this one. Its every bit as lovely (if not more so) than it appeared on my monitor.

After purchasing the deck I discovered it had absolutely nothing to do with the Illuminati society! I was thrilled. I have been a professional reader for more than 35 years and as you can imagine I have quite a few decks and have read with too many to count. This deck is one I use daily in my readings. Clients love its imagery and so do I.

The details, colour and characterization are brilliant. The quality of the card stock, the coating and the gold around the edge are of the finest quality. This is a deck that stands up to extensive daily use.

The single only thing I would want to change is the size of the deck. The imagery is so finely detailed that I would love to be able to see it in a larger format so be able to take in all those details at a glance. I hope someday the authors decide to do that, I will be first in line to buy one.

Let's start off by saying this deck is beautiful...no, it's stunning! But does this make it a good tarot deck to read with?

I was drawn to the deck for its beauty. The card edges have a gold trim giving it a very magical quality. The Hermit card reminds me of Van Gogh's Starry Night and it really drew me to this deck. Other notable cards are the Ace of Cups, The Alchemist (aka The Magician), Ace of Pentacles, 2 of Swords, 9 of Swords, 7 of Wands and more. The reason I say this is these cards for me seem to come alive and tell a story as well as the color choices are interesting.

Each minor arcana seems to represent a specific nationality. Wands is Arabic in nature with plenty of colored turbans, Pentacles has an Asian vibe, Cups is Eastern European and Swords seems very British. I respect trying to represent different cultures but for me it makes the deck have an offbeat feel. A lot of the card imagery is very traditional Rider-Waite with plenty of symbols on each card up for your own interpretation. Some cards have nudity such as bare butt and boobs but it's done tastefully.

Now I really do feel with this deck you need to read the book to better connect with it and thus where the major problem lies. I find the included companion book to be quite shallow. Sure, it may look pretty but it is not as detailed as previous Kim Huggens’ tarot books.

Upon release of this deck there just happened to be a separate e-book you could purchase (also by Kim Huggens) called the Complete Guide to Tarot Illuminati. This is an excellent marketing strategy but why not just provide deeper meanings when you buy the deck? This seriously turned me off from this deck because of this reason. (Now I have not read the e-book myself but I would imagine a 420 page book would be very insightful. It's just a shame it was not included with the deck.)

I have tried many readings with this deck and found it not to be accurate. Is this because I did not read the e-book? Probably.

Would I recommend this deck? Yes and No. No if you buy it on its own. Yes if you buy the e-book. I think the major trap a lot of people fall into is attracted to the beauty but the depth for me is just not there. The different ethnic groups is distracting. I gave my deck away to a friend and they love it and connect with it better so perhaps it's just me, but you have been warned.

The Tarot Illuminati is a gorgeous new deck from tarot specialists Lo Scarabeo. Its title refers not to secret societies or conspiracy theories but to the ‘Light of Wisdom’. The Tarot Illuminati closely follows the Rider Waite Smith standard utilising most if not all of its intricate symbolism and significant colour coding. The more one looks at these cards the more detail stands out – the pomegranates on the Empress' robe, the moon and sun the Chariot's roof, the rabbit by the Queen of Pentacles, the watery designs on the Queen of Cups' robe and the clouds on the Queen of Swords' dress. No small details have been compromised or sacrificed.

The use of historical costume is a key factor in the presentation of these cards, and is very theatrical. There is no consistency in the use of themes, emphasis is on beauty rather than accuracy for example the Two of Cups – an English Renaissance man holds mediaeval maiden, historically wildly inaccurate but the image is still emotive and effective.

The images are digitally rendered and for the most part this is extremely well done. The collaging is almost seamless, no crude cut-and-paste job here. The faces sometimes take on that strange plastic veneer common with digital imaging but for the most part they are attractive and realistic, albeit possessing a strange otherworldly quality, which is entirely appropriate for tarot cards.. The colours are vivid and vibrant and initially seem quite jarring when one is used to the muted tones of the Rider Waite Smith standard. However this is an unfair comparison – the dazzling colours are modern mirror of an old classic and faithful to Pamela Coleman Smith's original renderings.

The cards measure 70 x 120 mm – a fairly standard sized tarot deck. The design on the back is fully reversible. The card stock is thin but sturdy, low sheen, and shuffles well. The images are borderless with titles given on a decorated bar at the bottom of the card. This deck has gilded edges. The gilding appears to be of high quality and able to withstand repeated handling. The print is clean and clear, the images well defined and the colours brilliant.

The box is solid cardboard with a fold back lid and magnetic fasteners. A well in the centre of the box holds the cards, which do not come with their own packaging. The cards are accompanied by a 160 page full-colour book by Kim Huggens.

The meanings assigned to the cards are grounded in Rider-Waite-Smith standards (largely those set by Eden Grey) but offer new perspectives and possibilities within this framework. Each card is given its own page with an accompanying full-colour image reproduction. The card is given a subtitle which summarises its essence e.g. the Two of Wands is subtitled "the Conqueror at the Edge of the World", the Prince of Cups - "the Saviour and Grail Seeker", The Chariot is "the Soul Extended in Action", and so on. There is a dialogue – the card speaks to the querent or reader, and the information given here is extremely reliable. The author also includes a small paragraph of Themes and Concepts which are in essence the basic meanings one can assign to the cards.

The suits focus on different cultures:


The Major Arcana has an astrological foundation, the Minor Arcana are grounded in the elements and numerology. The Court Cards are titled Princess, Prince, Queen, King and each embodies an elemental duo.

This book is a great introduction to the Tarot Illuminati but readers wishing to explore this deck more thoroughly will probably want to invest in Kim Huggens’ greatly expanded book by the same title – a sample chapter and relevant links are included in the appendix.

I love using these cards - they handle very well. The imagery is familiar yet refreshing, an opulent interpretation of familiar themes.

This deck is recommended for anyone (except beginners); especially those looking for a Rider-Waite-Smith based deck. The Tarot Illuminati is an outstanding interpretation of the Rider Waite Smith deck and an important contribution to the tradition.