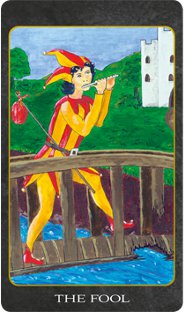 The Tarot House deck has gentle, uplifting images created by mother and daughter team from England. The deck combines their tarot, art and Reiki backgrounds into a positive tool for healing and self-development. It's a 78 card deck but the minor arcana aren't fully scenic.


Card Images from the Tarot House 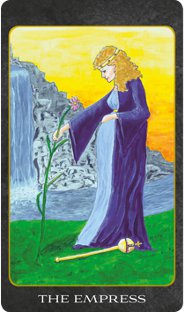 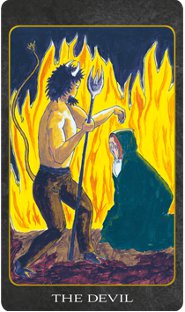 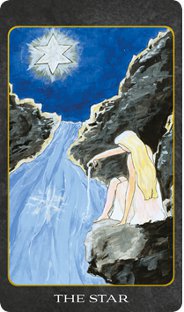 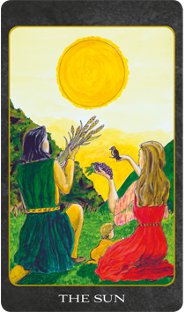 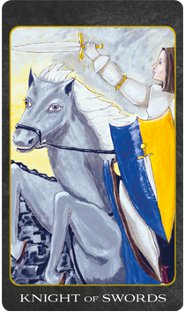 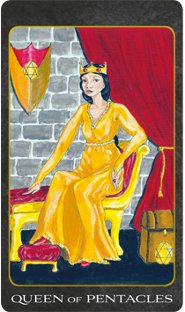 Among the dozens of new tarot decks released every year, it is refreshing to find one that is straight up and has no overbearing themes or agendas to push. The Tarot House tarot, a self published collaboration of a mother and daughter team, is one of those decks. The goal of its creators was to use their backgrounds of tarot, Reiki, and art to produce a deck with a positive, healing light, while toning down some of the darker aspects of the cards. Daughter Jenny, a Reiki practitioner who has 10 years of experience with tarot, envisioned a deck geared less towards divination, with its somewhat passive acceptance of fate, and instead wanted to create a tool that people could use for healing and self development. Mother Tricia, a talented artist, provided the beautiful, renaissance flavored artwork. Four years of hard work has produced a beautiful, vibrant tarot deck with a warm, calming energy. The art work is a clear, simple take on Rider Waite imagery. Each deck has been infused with Reiki healing. There are no tricks, no bells and whistles here, no changes of card names - just a straightforward, lovely deck that is a joy to use.

My deck arrived quickly in the mail from England, wrapped in elegant gold tissue paper and affixed with a Tarot House sticker. Instead of a box, a satiny brocade drawstring bag comes with the deck, and is available in either red, green, blue, black, gold, or pink, the color of which you choose when ordering. I thought that this was a nice touch, and that eliminating the need to have boxes manufactured is a good environmental choice. The cards are approximately 2 ľ” x 4 ľ” and of a good quality, flexible, medium weight card stock with a silky matte finish. The edges are smooth and even, and the art work is framed by a thin black border that flatters and accentuates the images without overwhelming them. The card backs are reversible, and of a deep charcoal color, with unobtrusive scroll designs and the words “The Tarot House” in a muted yellow.

The art is beautifully hand drawn and painted in vibrant acrylics, the images are clean and uncluttered. In keeping with the vision to create a tarot deck with a positive feel, the more “negative” cards, though not glossed over, have been toned down, their darker aspects not accentuated any more than is necessary. There are no evil faces peering out of the Devil , no pale corpses rising from coffins in Judgment. Even Death, a faceless figure cloaked in black, is silhouetted against a warm and hopeful rising sun. This somewhat “gentle” interpretation of the darker cards may make this deck more appealing for those who are frightened or turned off by the more sinister side of the tarot, but don’t think this is another wishy-washy, fluffy version of tarot, because it isn’t. Notice the moon card, with its couple on a dock under the moonlight - not so bad, right? Until you notice that stealthy little crab sneaking up the piling behind them…..

Some of my favorite cards would include the Sun, which shows a man and woman with their baby, kneeling before the golden sun with offerings of wheat and fruit. The obviously fertile Empress, with her golden hair and her purple robe, is another favorite. The courts are especially wonderful, I love the serene expressions of the Kings and Queens and how their jewel toned garments pop against the grey stone castle wall backgrounds. The knights are regal and energetic, the pages young and lively. The images are easy to understand, and interpret, almost generic in a sense that there are no distractions - the clear and neutral style of the art provides a clean canvas for one’s own impressions and feelings.

The minors are a unique standout feature in this deck.. Trees and water symbolize cups, swords and clouds are used for swords, fire and wands for wands, and earth and vines for pentacles - but instead of the typical unillustrated pip, where one typically sees only a specific number of cups, swords, wands, or pentacles on a plain background, the artist has used very simple, yet effective symbolism to portray the general meaning of the card. For example, in the Five of Cups we see a somewhat barren tree, it’s branches sagging, barely able to hold up four cups, having already lost the 5th cup, which is floating in the water below. The image gives a sense of defeat and loss, but hope as well, seen in the cups still remaining in the tree. By comparison, we have the 10 of Cups, a card of contentment, security, fulfillment. Here Tricia has painted a strong, upright tree, healthy and vigorous, laden with flowers and foliage and it’s 10 golden cups. I found this to be a brilliant take on the pips cards, and this deck would be very helpful to someone just learning to read with unillustrated minors, as well as present a fresh view for more experienced readers.

Included with each deck is a fold out pamphlet listing card meanings. For more detailed explanations of the cards, one can refer to the organized and easy to navigate Tarot House website. The website is colorful and beautifully done, and there can be found a wealth of information about each card, along with a section on spreads that includes a 6 card Tarot House spread developed by the deck creators. Because of the Rider Waite symbolism, any tarot book that follows Rider Waite could also be used with this deck.

I have really enjoyed working with the Tarot House tarot, and use it almost daily. Whether one is a collector for the sake of tarot art, or wants to use the deck for reading, you won’t be disappointed. It would appeal to advanced readers as well as novices, as it is easily usable without extensive study, especially for those learning to read unillustrated minors. The bold and cheerful colors and less sinister symbolism may also make this deck attractive to much younger readers. All in all, it’s a wonderful deck, full of feeling and calm energy, and I highly recommend it.