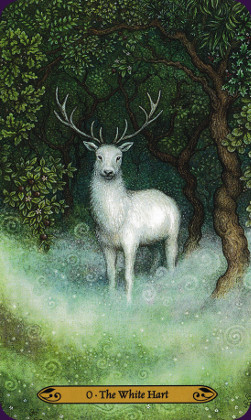 The Forest of Enchantment Tarot is a gentle and pretty reimagined tarot of the archetypal dark woods of fairytale and folklore legends. The 78 borderless cards are beautifully detailed and packaged in a box set with a full companion book.


Card Images from the Forest of Enchantment Tarot 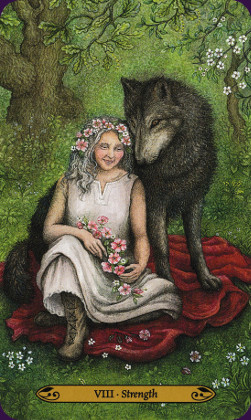 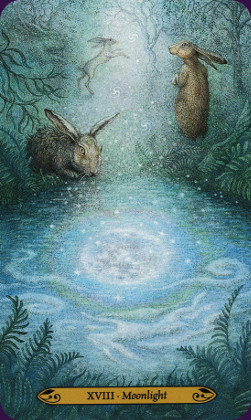 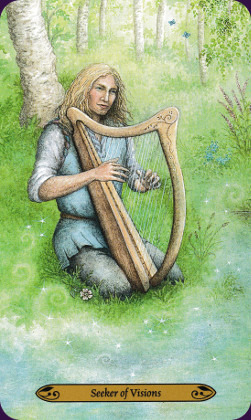 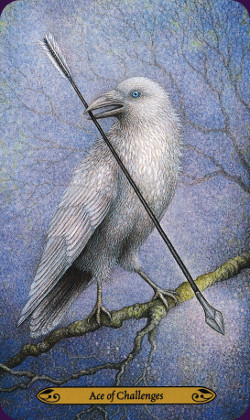 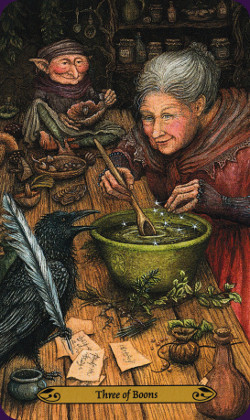 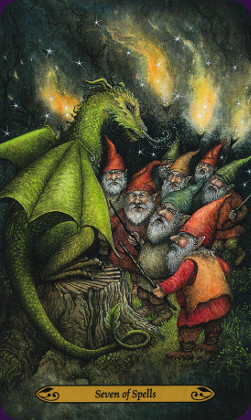 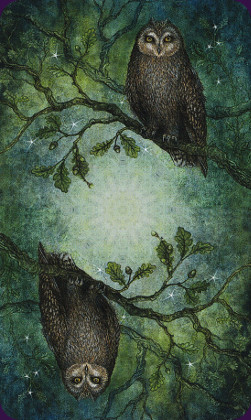 The Forest of Enchantment is the archetypal dark woods of fairytale and folklore, found in the myths and legends of northern Europe. It is inhabited by both humans and fantastic creatures, the wyrd, the fair folk, witches and wizards, shifters, and those who dwell along the edges. There is magic here along the forest’s paths, and also danger.

The Forest of Enchantment Tarot is an immersive experience, and the deck’s creator Lunaea Weatherstone has reimagined her tarot. The conventional titles of the Major Arcana have largely been discarded in favour of more thematic names such as The White Hart replacing The Fool, The Enchanter becoming The Magician, The Green Mother - The Empress, The Forest Lord - The Emperor. Other interesting renames include Black Shuck taking over as Death, The Fairy Wind replacing The Chariot, and The Huntsman supplanting Justice. The guidebook includes a chart which details all the changes to titles.

The Minor Arcana has been altered, with the suits being renamed: Wands are now Spells, Cups are Visions, Swords are Challenges, and Pentacles are Boons. Court cards too have new titles, a Page is now known as Child, Knight is a Seeker, Queen – Weaver, and King – Keeper. it should be noted here that while familiar titles have been substantially altered, the divinatory meanings of the cards still align with commonly accepted meanings, particularly those associated with the classic Rider-Waite Tarot.

This is a 78 card, fully illustrated tarot, with two Arcana. The Major Arcana has 22 cards, the Minor Arcana has 56 cards, divided into four suits. Each suit has 10 number cards and 4 Court cards. The cards measure 70 x 120 mm, which is a fairly standard size the tarot cards (both longer and wider than playing cards). The card stock is thin, light, and quite flexible. The corners are rounded, which helps prevent chipping and peeling along the edges. They have a glossy, polished finish which keeps the cards from sticking together and clumping when they are shuffled. This particular finish makes shuffling this deck both smooth and easy. The print quality is excellent – the illustrations are quite delicate with subtle colours that are beautifully reproduced. The images are clear and distinct, with no misprints or colour bleeds.

The artist, Meraylah Allwood, uses a natural pallette largely focused around greens, yellows, deep turquoises, browns, and berry reds. Allwood specialises in painting miniatures, the original artworks from this deck being not much larger than the tarot cards themselves. Her style is delicate and achieves an almost pointillistic softness, along with richly textured backgrounds – the overall effect is like stepping into a fairy-tale illustration. The images are borderless and reach to the edge of the cards. Titles and numbers are given on a small golden panel at the bottom of each image. The print on the back is reversible – mirror images of an owl perched on a branch, with a pale green mandala glowing faintly in the centre of the design.

The cards and guidebook are part of a box set. The box itself is made of heavy cardboard and has a fold back lid, which is held shut with magnetic clasps. It is papered in glossy mossgreen with numerous illustrations from the Forest of Enchantment Tarot decorating it. It is also printed with information about the deck, and publisher’s details. The cards come sealed in plastic, and sitting in a cardboard well in the centre of the box. A yellow satin ribbon is threaded across the base of the well which enables the easy removal of both the guidebook and the cards from the box. The well itself is printed with details from the Ace of Visions card – a lovely attention to detail. While these box sets are somewhat bulky, they do offer excellent protection for your deck and guidebook. It's never going to be something that you will just slip into your handbag where its size and weight will go unnoticed, however a box set like this one isn't too big for a tote bag or backpack.

The 288 page guidebook by Lunea Weatherstone is titled "Your Path Through the Enchanted Forest" and is written in English. It is solidly bound, and printed on high quality, heavy and glossy paper. The book’s Introduction outlines the ideas that inform the Forest of Enchantment Tarot. It also includes some foundation information about the structure of traditional decks and illustrates the changes made to this deck with several helpful charts. Guidelines for card care, FAQs, and instruction for how to use tarot cards including shuffling, and reading reversed cards is all included in the opening chapter.

All the cards are afforded their own two-page mini chapter, with a full colour full page reproduction of the card. Major Arcana cards have a lengthy description of the illustration which details the myths and legends attached to the image, as well as information about what it may represent to the Seeker. Beneath this is the "Meaning at a Glance" which is essentially the divinatory interpretation. "A Closer Look" directs the Seeker’s attention to details which help with the interpretation, using folklore, scraps of myth, and legend. The Minor Arcana chapters are divided by number not by suit.

Nonetheless each Minor card receives the same attention to detail as the Major cards do. Court cards include the same detailed descriptions afforded the other cards, but also include Character Traits – which may apply to oneself or to a secondary person, and Shadow Traits which are the ‘other’ less salubrious, darker, negative, or more difficult aspects of one's own or another's personality. No reversed meanings for any cards are given. The divinatory meanings given are very much in line with commonly accepted interpretations, nothing too radical or brutal here. The advice offered is positive and solution oriented.

Six divinatory layouts are included – a one-card draw, a two-card draw, the ‘Breadcrumbs and Moonstones’ layout, ‘The Owls Advice’ - a six-card spread, the nine-card Shiining Eyes, Creeping Feet’ spread, and the 12-card ‘Council of Animals’ layout stop There are also 19 lined pages at the rear of the book, for the card’s owner to make their own notes.

If you are attracted to the dark woods, Arthurian legend, Tolkienesque fantasy, tales of Faerie, green magic and forest witchery then this is definitely a tarot for you. At the same time it is gentle enough to appeal to young tarot users, and could be suitable for professional readers with apprehensive clients who don’t respond well to more ‘confrontational’ decks.

Steeped in the legends of the mists and the greenwood this beautiful deck is user-friendly and easily mastered by anyone with a little bit of tarot experience. For all those who hear the forest calling them – this tarot is highly recommended.