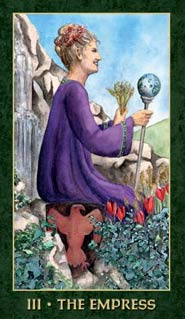 The Forest Folklore Tarot is inspired by the New Forest, an ancient woodland in England. The blended watercolour and photographic cards feature forest wildlife and fairies, gnomes and nymphs from legend. 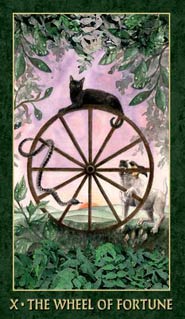 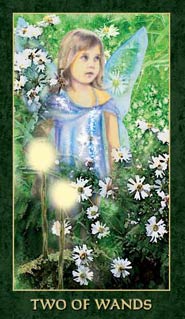 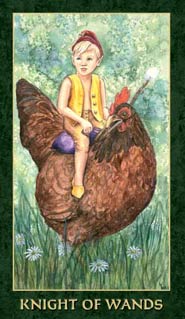 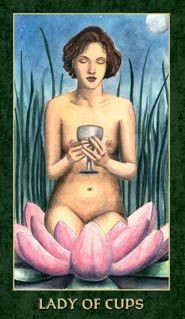 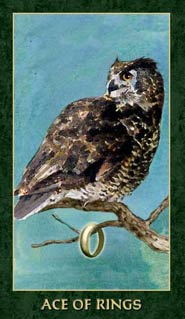 The Forest Folklore Tarot is the first deck from British illustrator, Kessia Beverley-Smith. Her cards are inspired by the legends, wildlife and mythology of the New Forest area in Hampshire, England and feature dwarves, fairies, nymphs, imps and humans in natural surroundings.

Kessia’s artwork is predominantly watercolour with a few photographic elements. Friends and family of the artist posed as models for the cards, and each has been assigned a card that matches their personality (or failing that, their physical attributes). Where their faces have been included, this works well, but not all cards seem have a ‘real’ face. Over deck, the art varies from very photo-realistic in cards like the Ace of Wands and the Chariot, to a more blurred style in the Lady, Knight and Queen of Wands.

The twenty-two major arcana are described as the ‘heart’ of the Forest Folklore Tarot, and can be used on its own for readings, according to the companion booklet. These cards have a reasonably standard Tarot image with a woodland flavour. I liked the blue-cloaked High Priestess, who sits holding a ball of white light, a black cat at her feet, under a trilithon of stones against a starry night sky. The Empress, who has a broad smile on her face and holds a scepter in one hand, a bunch of wheat stalks in the other, and is surrounded by a waterfall and lush plant growth. The World, in which an ox and a lion lie in the foreground of the card, and a woman dances with an arrow in each hand under a thick canopy of trees in the background.

The minor arcana are all fully-illustrated in a similar artistic style as the majors, and are divided into suits of Cups, Wands, Swords and Rings. Each suit is depicted by a different forest folk: water nymphs, fairies, imps and dwarves respectively. The Cups depict nude women on several cards (they are nymphs); the Wands are the suit of the blonde, blue-eyed fairies of all ages; the Swords cards are painted in pink and rose hues and have a one-foot tall pink imp interacting or observing the people on the cards, devil-on-the-shoulder-style. The suit of Rings, associated with Dwarves, has elves with pointed ears, barefoot hobbit-like creatures and fairly human-like dwarves. The Aces each feature an animal native to the New Forest – the kingfisher, native pony, deer, and tawny owl – while the court cards are all people cards with titles of Lady, Knight, Queen and King.

The suit cards show the relevant number of symbols for each card – four wands in the Four of Wands, for example - but only have a vague resemblance to Rider-Waite scenes. The deck’s info says it is based on traditional tarot interpretations, but some artistic licence has been taken. A sample of the book’s card meanings:

The Wheel of Fortune: A large wagon wheel, representing perpetual motion, stands on the edge of the wood. Resting on top is a black cat, while entwined within the wheel is a snake, and a small dog clings to the spokes. The animals have temporarily halted this perpetually spinning wheel. Meaning: Now may be a good time to jump on board and make the most of life. Good luck. Abundance. Success. Reversed: The opportunity has passed on this occasion. Misfortune.

The cards have a reversible back design in various shades of green, and a dark green border on the face of the card. In the hand they are also very glossy and rather adhesive. I found they required some working-in before they are usable -- I had to unstick all the cards from their neighbours before I could look through the cards, let alone shuffle them.

I liked the varying ages and faces of people across the deck -there is a small girl of about four in the Two of Wands, to a white-haired couple in the Ten of Rings, and people of all ages in between. There are moments of humour in the cards, too: the Seven of Cups shows a boy gazing at seven cups, each with a naked nymph inside. The booklet says, “A mortal man comes across a group of seven goblets, each containing a beautiful naked nymph. If he is dreaming, he does not wish to awake.”

The Forest Folklore Tarot is a pretty deck of Tarot cards based in a down-to-earth yet fantastical world. It could be used by a beginner with a connection to the art or the New Forest, but is probably best for the Tarot reader with some experience.