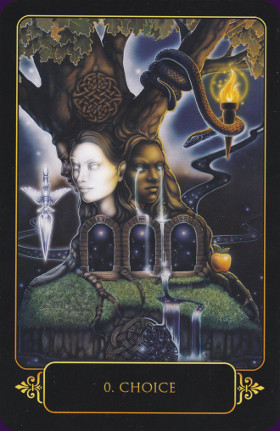 The Dreams of Gaia Tarot is a stunning 81-card deck of fantasy art from artist, Ravynne Phelan. Her first tarot deck is a showcase of her gorgeous artwork and also a complete and detailed re-imagining of tarot. The beautiful set includes a 308 companion book, also by the artist.


Card Images from the Dreams of Gaia Tarot 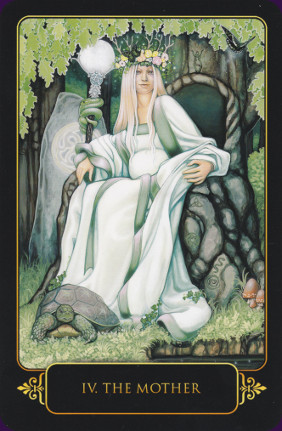 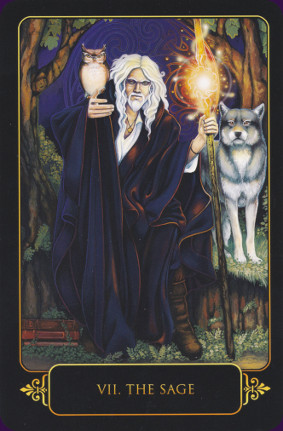 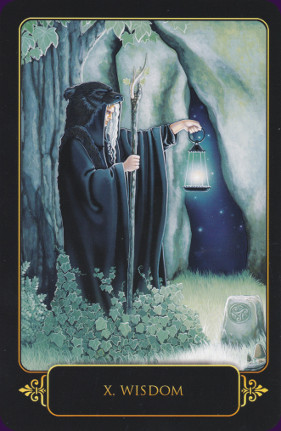 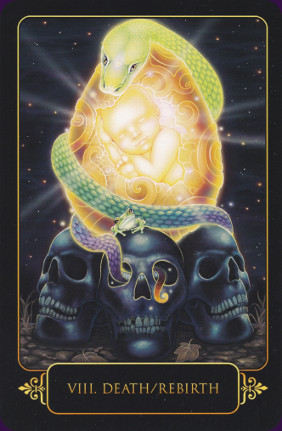 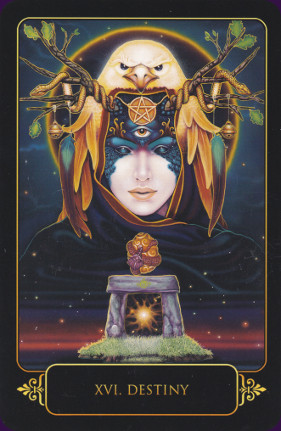 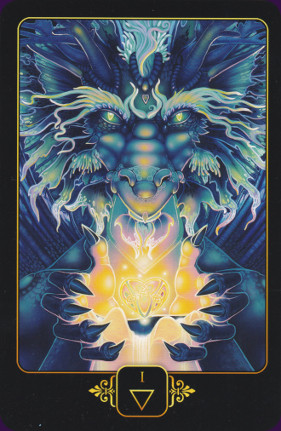 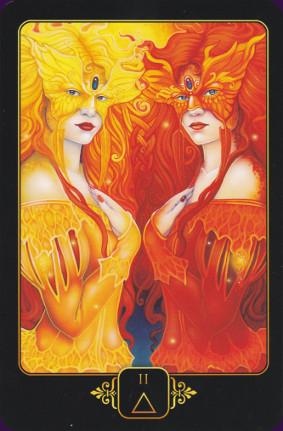 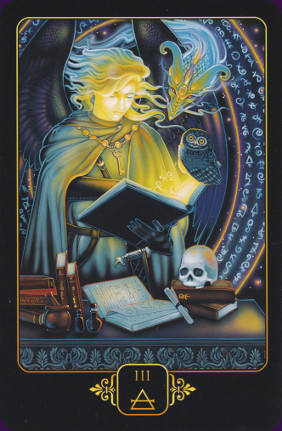 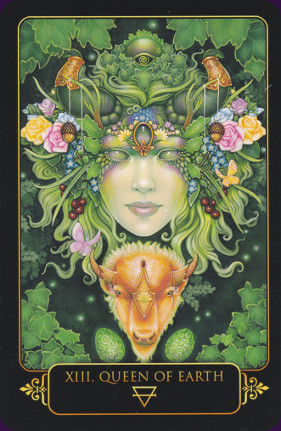 Ravynne Phelan is a prolific fantasy artist who has also illustrated several Oracle decks most notably the Messenger Oracle, the Mythic Oracle, and is a contributor to the Oracle of the Dragonfae. However the Dreams of Gaia Tarot is her first tarot deck – a stunning offering of 81 cards showcasing her gorgeous artwork.

The Dreams of Gaia Tarot has been created to help the Seeker connect with their higher self as well as locate and begin the process of integration and healing past experiences which may be preventing one from achieving their fullest potential. It is guided by four principles – To Seek, To Feel, To Grow, To Heal.

This is an 81 card fully illustrated tarot deck. It has 25 Major Arcana cards and 56 Minor Arcana cards. The Major Arcana is completely restructured, although there are some familiar concepts masquerading under new identities. In Desire one may recognise The Devil, Intuition is very similar to The Moon, The Child and The Fool are almost one in the same, and in The Mother and The Father one may easily discern the Empress and the Emperor respectively. The single most important card in the deck is card 0 - Choice, for it is the choices we make which decide our fate. Other cards include The Youth, The Crone, The Sage, Death/Rebirth, Knowledge, Wisdom, Healing, Love, Union, Self, Abundance, Destiny, Journey, Thought, Emotions, Desire, Perception, Integrity, Faith.

The structure of the Minor Arcana differs a little from standard tarot decks in that it has number cards 1 to 12, followed by a Queen and King. Cards 11 and 12 feature both a number and a title such as Body/Mind, Masculine/Feminine, The Counsellor, The Scribe. The suits of the Minor Arcana are identified by elements - Earth, Air, Fire, Water, rather than objects (Cups, Swords, Pentacles, Wands).

The cards measure 85 x 130 mm – this makes them a little broader than many tarot decks, but of average length. The card stock is rather unusual, being quite thin and flexible but not fragile. The cards have a good weight to them, and sit nicely in the hands. They are very smooth and easy to handle, they shuffle very well. The finish on the cards is exceptionally glossy and peculiarly crisp. It should be noted here that finishes like this are prone to scratching when they are used on rough surfaces, my advice would be to use them on either clean glass or on a reading cloth. The finish also shows up greasy fingerprints with a vengeance, however these can be removed by polishing the cards with a soft cloth.

The edges of the cards have been finished in sparkling golden gilt. This is high quality and does not flake or tarnish when the cards are handled, however, as with all gilt-edged decks, the cards may initially be stuck together - which is easily remedied by flexing the deck end to end and side to side. The print quality is outstanding, the images are clear with crisp lines and the gorgeous colours positively glow.

Ravynne Phelan has a distinctive and unique art style – it is highly stylised and very detailed. When she depicts the natural environment she uses a 'realistic’ pallette, however when she depicts otherworldly beings she ventures into spectacularly imaginative colour schemes. Ravynne’s artworks, as noted before, absolutely glow – her Minor Arcana is colour-coded with Earth featuring rich greens, Air delivery by icy pastels, Fire with glowing oranges and yellows, and Water by deep indigo and pale blue.

The images feature both an idealised Pagan world, the worlds of myth and legend, the Faerie realm of mystical beings, and of course Ravynne’s famous and extraordinarily powerful dragons.

Each image has a narrow orange-yellow border, with a lozenge -shaped frame at the bottom for numbers and/or titles. The back of the card has a simple thin lined frame and blank-black space. This makes the cards reversible.

The cards come packaged in a solid cardboard box with liftoff lid. The finish on the box is glossy black with gold foil framing and titles. Images from the cards, and reproductions of cards, as well as information about the deck illustrate the packaging. Inside the box the cards sit in a cardboard well, with the thick guidebook atop them. This box is sturdy and solid and built to last. It can certainly be used to transport the cards around, and is attractive as storage wherever one may choose to put it.

The dense 308 page guidebook is written by the artist. The guidebook is a paperback with a cover of black, in a powdery-satiny texture, featuring gold foil framing and titles, and printed with images from the deck.

It is somewhat exceptional in that it eschews the usual gratuitous padding outlining the putative history of the tarot, as well as the usual description of the inspiration, and artistic history of the deck’s creation. Instead it focuses on the Seeker’s actual needs – extensive information on how to interpret the cards and actualise the advice given.

'On The Tarot’ gives some thorough information on how to use the cards, which includes; using the cards regularly, how to phrase a question, taking time to do a reading, tarot journalling, and tarot as the mirror of your life. 'The Deck Structure’ outlines groupings for the Major Arcana, and further information about ‘Stages of Life’, ‘Reason for Being’, ‘Influences’, and ‘Keywords and Phrases, and Card Meanings’. It also breaks down the basic structure of the Minor Arcana. Card spreads are included in this chapter – there are four layouts: 1-card draw, The Union Spread – a simple 3-card draw, and the more complex Dreamer’s Spread and Dreaming Tree Spread.

Chapters for the Major Arcana have a small black-and-white reproduction of each card, a good collection of Keywords, a dozen or so Key Phrases. The divinatory meaning of the card is explored with an attention to detail and depth rarely given in guidebooks, extending over several pages. The cards are analysed in the Past, the Present, and the Future. Under the title ‘Potential Blockage’ reversed meanings are given, and here solutions and insightful wisdom are offered.

This is a tarot deck of real power and potency, and well as deep spiritual strength. For fans of Ravynne Phelan’s artwork, and lovers of fantasy art in general, this tarot deck is an absolute treasure trove. For tarot readers interested in a deck which explores new possibilities and potential for tarot, this deck is something really special. Pagans and seekers of the mythical and mystical will find this deck almost irresistible. It is probably not the best deck for beginners because it does not have a traditional tarot structure or imagery. However if you are looking for something new in tarot decks, something gorgeous, something challenging, something healing, something imaginative, something with a beautiful soul then this is the deck for you.