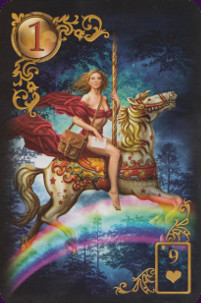 The Gilded Reverie Lenormand has the traditional 36 cards of a Lenormand-style deck, illustrated in Ciro Marchetti's lush and inimitable style. Published by US Games, the cards have gilded edges and are packaged in a neat little hardback box. 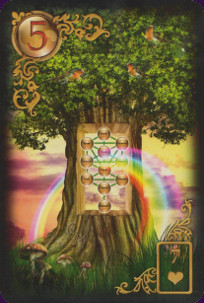 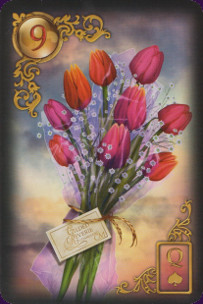 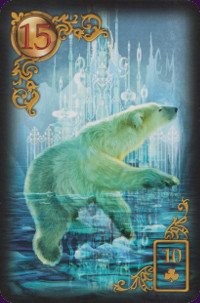 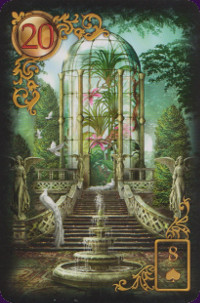 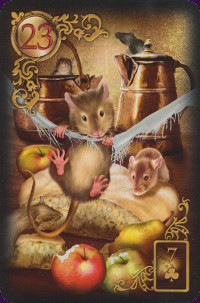 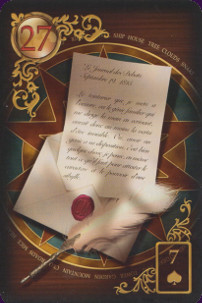 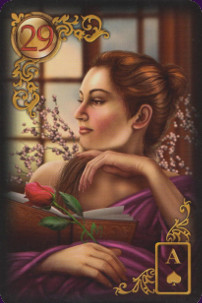 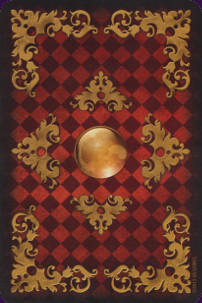 The Gilded Reverie Lenormand by Ciro Marchetti is a stunningly beautiful, very solid, digitally-painted deck. The cards are 2.75 by 4 inches, bigger than poker size playing cards (2.5 by 3.5 inches), but not by much—and they are incredibly thick. The 36 cards together stack up to almost an inch. I think this is really nice. The cards have enough give that I believe they could be shuffled the way one shuffles playing cards, but I can't honestly say I've tried it—I prefer not to bend the cards I read with, personally. The gilded edges on the cards are absolutely stunning. I've heard some people refer to gold borders on these cards--this is incorrect. The borders are just as shown in the pictures here on Aeclectic: they fade to black. It is the edges of the card, the actual sides of the stock, that are gilded, not the border. That is to say, the gilding is on the third dimension. The gilding is more beautiful in person than I imagined, and is very reflective. The only downside to the gilding is that straight out of the box it is helping my cards stick together a little more than I would like them to for ideal shuffling. I assume this will fade with time (it's gotten better just over the past day or two), so I'm not worried, but I thought I should mention it.

The card backs are perfectly reversible except for the (C)2013 US GAMES copyright text that appears only in the lower right corner. The backs have a beautiful, deep red, diagonally-checkered design that pairs beautifully with the same design in goldenrod tones on the inside of the box. The box, by the way, is one of the better examples of packaging for a deck (Lenormand, Tarot, or otherwise) that I have ever seen. It's a very sturdy cardboard box with magnetic closure that opens like a book. The paper used to print the box artwork has a smooth, leathery feel that I'm just about in love with. The cover of the box has a version of Marchetti's artwork for the Birds card, and the box (unlike the faces of the cards) DOES have gold foil accents on the birdhouse, lace border, the “G” and “R” in “Gilded Reverie,” et cetera. The box is exactly the right size to hold the cards, the 48-page LWB (Little White Book), and nothing else, which I think is perfect. There's no cardboard support inside for the sole purpose of taking up space, which is good because it means there's no cardboard support to get smushed and let your cards move around all over the place. This is also good because it means the box is small enough to fit comfortably in even a rather small purse or a large clutch.

The included LWB is good enough for most purposes — I'm certainly totally happy to accept it instead of a full-size book, the tradeoff being the beautiful, condensed packaging. It starts with an introduction by Tali Goodwin, followed by a note from Ciro Marchetti. Each card description has a short vignette (some of them with some rather poorly-written rhymes, but I'm willing to ignore that) written in the first person from the card's point of view (by Rana George), followed by a further description written by Tali Goodwin. The vignettes and descriptions have been edited and approved by Ciro Marchetti to reflect his personal feelings on the deck. Here, as an example, is the text for card 1, The Rider:

I am always bringing news, look around me to see what it includes. I might be coming to visit or bringing you some changes. I am fast and always on the move. If you see a negative card close by, you will probably not enjoy the reply.

The Rider of the Lenormand brings news. It is the first card and announces new things. In the Gilded Reverie deck, we behold a dreamy female Rider who sits astride a carousel horse; the horse who in fairy-tale stories is the conveyer of messages. She may even be Iris, the Greek messenger of the Gods.

The fastened messenger bag across her shoulder may be suggestive of additional messages for different destinations along her night's voyage. In her hands she grasps a white envelope, a letter that is out of the bag and ready to be delivered for the current reading. The carousel is the ideal metaphor, as this card is a new cycle being initiated and an ending of the old state. The ups and downs of the carousel also symbolize the magical flight that powers this messenger to its destination. Freed from the ever revolving 'merry-go-round of life,' whose circular motion is also defined by the laws of physics as acceleration, our rider symbolically reflects the pace and speed of information by which our lives are increasingly affected.

The LWB finishes with three spreads, each with an accompanying sample reading: the “Simple Nine-Card Spread” by Tali Goodwin, “The Fortune-Telling Day Spread” by Tali Goodwin, and “The Chocolate Bar Spread” by Rana George. The Nine-Card Spread is particularly useful for readers just getting used to Lenormand, and The Fortune-Telling Day Spread is meant to help you track and improve your reading accuracy with daily readings each morning. The Chocolate Bar Spread is one of those spreads that seems totally valid and sensical except that I can find not a single explanation for what it has to do with chocolate, so the whole thing ends up feeling kind of odd to me. You may find this useful or endearing—to each his/her own. Should you be unsatisfied with the included LWB, a 140-page .pdf companion book in full-color is available for purchase and download on Marchetti's own website. I have not purchased it, but am likely to do so soon.

The art on the cards is absolutely gorgeous. I am not partial to digital artwork, and while much of Ciro Marchetti's other work is objectively beautiful and well-done, I don't feel drawn to it or necessarily like it. This deck is different. There is something more traditional, I think, about the basic imagery in this deck, that makes for something very beautiful when that traditional imagery is treated the way Marchetti has done. The images seem simultaneously to pop off the surface of the cards and to lie behind the surface of the cards, as if in a diorama or behind a window. Someone else said these cards almost appeared to glow as if they were lit from behind. It is true. A note to those who rely on the playing card correspondences on Lenormand cards: card 18, the Dog, is incorrectly attributed in this deck to the 10 of Spades, rather than the 10 of Hearts. The 10 of Spades is also (correctly) attributed to card 3, the Ship. I am given to understand that future printings of this deck will have this corrected, but if this bothers you greatly, you may want to hold off for now and wait for a later printing. I personally am not bothered by this small error, and I find it rather endearing that the error occurred on the Dog, so loyal and eager-to-please. I have actually let the knowledge of this error color my impression of the dog card and the way I interpret it in readings, and I like that. It could also make for a very interesting interpretation if and when both 10s of Spades show up in combination.

The illustrations on each card are very detailed, in addition to being very beautiful. The Clouds card, 6, is a particularly great example of this, with the bright half of the clouds being dotted with soaring birds, and the dark half broken with lightning striking the tree of the previous card. What this has meant in my readings so far is that while the key to reading these cards is usually in being very literal and reading right off the surface, the layers of imagery underneath can also contribute meaning when the top layer isn't quite enough. For example, behind the Key (33) sits a birdcage which houses a rose; and the Child (13) contemplates a storybook from which blooms a castle, a rainbow, a doll, a ball, a spinning top, and several blocks, which display the letters CM and GRL — standing for Ciro Marchetti and Gilded Reverie Lenormand. You might guess from this that Marchetti has hidden his initials (CM) in every card, and you would be correct.

On top of being very detailed and very beautiful, this deck is very enjoyable and easy to read. I have performed several successful readings for myself and others since receiving this deck, and I look forward to a long journey together.