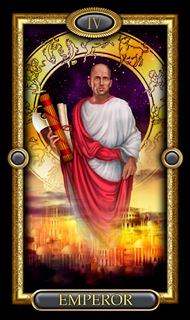 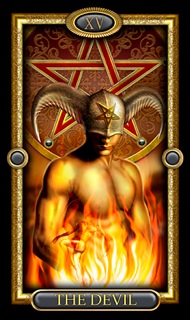 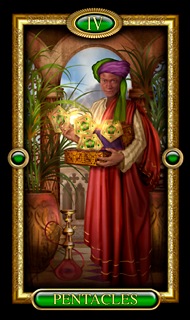 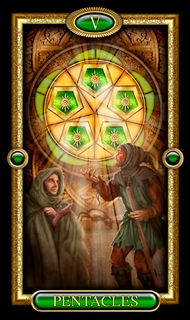 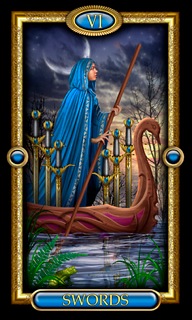 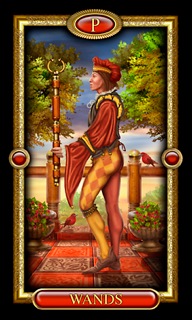 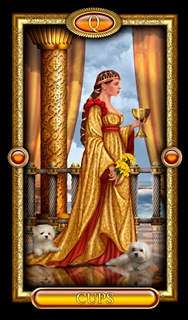 First thing I'd like to say- I LOVE everything Ciro Marchetti makes. His work is an amazing mix of enthralling retrotech and Carnivale-style beauty. I bought his Gilded Tarot when it first came out, and continued to buy new copies, passing along my previous ones to students who showed promise. That being said, I always treated it as "just another awesome deck I have." As a teaching deck, I always felt it lacked something I needed, and as a reading deck for work or private use, I always found I had others I preferred (including the Tarot of Dreams by the same author).

When I ordered the Gilded Tarot Royale for a friend, I wasn't expecting to fall in love with it myself. The improvements on the art I'd seen on the webpage didn't move me, and I felt I'd rather just have a regular copy of the Gilded Tarot original deck. So, imagine my surprise when she unwrapped her birthday present, and revealed stunning art that made the entire room grow silent.

The online images do not do the cards justice. The gilded edges of the cards, coupled with the rethought and absolutely amazing images on the cards have made this deck my new favorite. The pictures are well thought out and well-considered for use in readings: the sample spread that comes with the PDF book written for the deck is amazingly accurate, even more accurate than my own invented spreads. The cards speak and are lively, and the cardstock is both firmer (for a longer lasting deck) and larger than standard Tarot, which lends an even stronger impact during a reading.

These cards are well worth the purchase. I recommend them to any Tarot enthusiast, and I highly encourage anyone interested in a rich, expressive deck of cards to consider the Gilded Tarot Royale.

Gilded Tarot Royale: A Deck is Reborn Just a short time ago, a few South Florida Tarot friends and I were enjoying a meal at Ciro and Maria Marchetti's lovely home. Ciro pulled up an image of the Strength card from Gilded Tarot on his amazing computer. Then, he showed us another image. It was an image of the same Strength card, but it had been altered. The lion's mouth was different. The woman's dress was more detailed. Ciro explained that he was interested in creating a new special edition of the Gilded Tarot, incorporating advances in both computer technology and his own tarot understanding. Fast forward some months and the Gilded Tarot Royale has become a reality.

Amongst my students the original Gilded Tarot published by Llewellyn is a favorite. It does not contain the most traditional images, but there is an almost intangible appeal to this deck. Perhaps it is the colors, the cool steampunk feel of Marchetti's "retrotech" images, the masks, jesters and cosmic images that somehow blend together to create a tarot deck that stimulates the imagination and intuition.

The Gilded Tarot Royale is self-published. Its packaging, printing and cardstock are of the highest quality; arguably better than standard decks from most publishers. The deck is oversized with actual gilded edges. It comes with a CD that includes a comprehensive PDF booklet. In the booklet, Ciro discusses each card, pointing out the changes and symbolism. The booklet also includes three spreads especially designed for this deck by members of the tarot community; Pamela Steele, Lee Bursten and me, Christiana Gaudet.

Ciro Marchetti's art style has made a definite mark on modern tarot. I believe there are new tarot students whose entire visual experience of tarot is based on Marchetti's work, rather than the Waite deck in the yellow box that readers of my generation identify as their first introduction to tarot art.

The miraculous thing about Marchetti's work is that he paints entirely in pixels. Of course advancements in computer technology would afford him more detail and nuance in his pictures. And that is primarily what I see in this new deck; more nuances. The faces of the characters are more detailed, as are the costumes. The quality of the art is better overall. In a way, it is like the difference between an animated movie and a live-action movie. The message may be the same but the live-action film evokes more emotion, and is more fun to watch.

There are some symbolic changes as well. In Major Arcana Six, the Lovers, the man is now transparent. Is he real, or simply a figment of the woman's imagination? This helps us to focus on the deeper meaning of the Lovers, and is a nice correction to the rather simplistic Lover's card in the original deck.

The Gilded Royale Hermit is contemplating a snake. In Strength, the chains with which the woman controls the lion are more apparent. The Chariot is drastically changed. The Charioteer, though still female, is now regal, balanced and determined.

The Gilded Royale in no way diminishes the original Gilded. Gilded Tarot may be flawed, but it is also well-loved. If you are one of the few who didn't love the original Gilded, it is worth giving this new deck a try. The art is better, and the symbolism is better.

If you, like me, love your Gilded Tarot, you also need this new edition, simply for its beauty and maturity. It is like seeing a small child you once knew now grown into an adult.