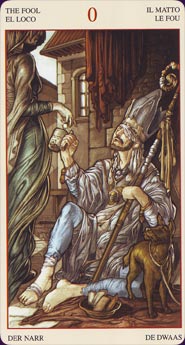 The Mona Lisa Tarot is an innovative deck that is inspired by the imagery of the painting of the same name, the Renaissancee era, and the life and imagination of Leonardo da Vinci. The card scenes often take the tarot in a new and different direction. 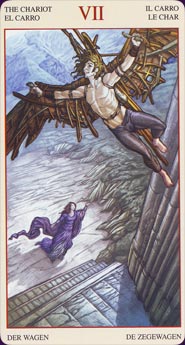 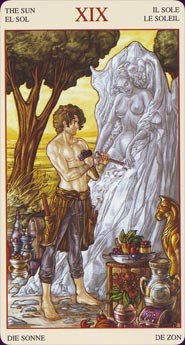 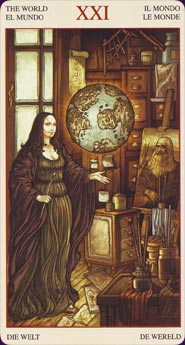 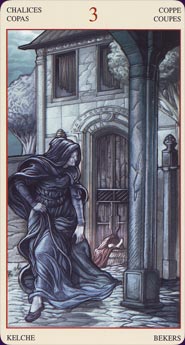 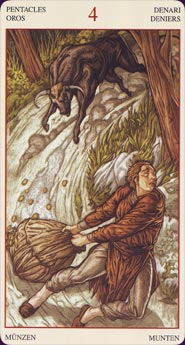 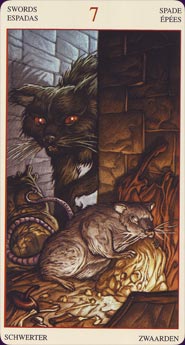 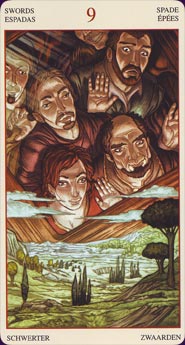 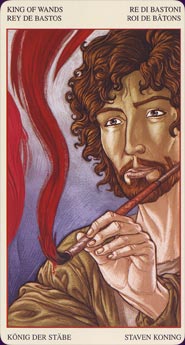 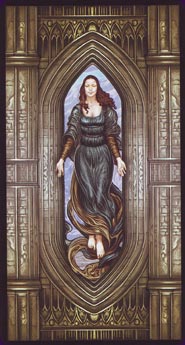 The Mona Lisa Tarot is a collaboration between innovative deck author, Mark McElroy (Tarot of the Elves, Lo Scarabeo Tarot) and artist, Paolo Martinello, creator of the Universal Fantasy Tarot.

The deck is 78 cards on the usual Lo Scarabeo good card-stock, with non-reversible backs in a glossy box. The borders are minimal, and the titles pushed to the far edges of the card, offering an attractive frame, yet allowing the artwork maximal space. The deck seems to be inspired from the imagery within the Mona Lisa Painting (1503-1506), and circumstances surrounding its creation, as well the life and imagination of Leonardo (1452-1519), life and time of his famous subject, Lisa del Giocondo, (1479 – 1542, or c. 1551), scenes from Florence, and related historical events, such as (possibly) the 1527 sack of Rome, and 1529 siege of Florence, and the 1503 poisoning of Pope Alexander VI. The Mona Lisa figure appears often swirled in silk, perhaps to remind us that Lisa del Giocondo was the wife of a silk merchant. The spectacular landscape of the portrait is also much explored. An accompanying book (not yet published) is expected to accompany the deck, and will hopefully reveal much of the historical context and events depicted in the cards.

My first reaction to this deck is overwhelmingly positive. I am acquainted with the artwork of Paolo Martinello, having loved his Universal Fantasy Tarot, and awaited the Mona Lisa Tarot with impatience. In the little white book introduction, Marc McElroy writes “It is a new oracle, with a voice and vision and vocabulary all its own, designed to challenge your sense of perspective and provoke new insights.” For once, here is a deck which delivers even more than it promises. Indeed, in every card a link to a traditional tarot vocabulary is discernible, however, the interpretation takes an unusual twist. Some of these new interpretative twists may indeed have the potential to shock, and even anger some people; but I believe most will be inspired and stimulated.

In the category of possibly shocking, we have the Fool. This Fool is much worse off than the familiar “Matto” of antique decks -- here is a blind and shoeless tramp, begging coins on the street with his little flea-bag dog; yet... this Fool is also outfitted in a pope’s mitre and crosier (curved-handled staff). In the little bowl at his feet, is he perchance selling....absolutions? Perhaps it is a comment on the disastrous Medici papacy, perhaps it is a tale of divinity disguised as human-trash. The interpretive possibilities are rich.

The Three of Cups offers another challenging interpretation : instead of our usual three graces dancing, we have a veiled woman running away from the doorstep of a palace where she has (presumably) just deposited and abandoned her baby in a basket. At first this scene of heartbreak might seem a dismayingly “wrong” take on what is usually one of the most positive cards. Yet if we pursue the moment a bit further -- imagine the surprise and joy of the rich couple that will open their doors to discover the bundle of love they may have always longed for -- all of a sudden it fits. I won’t spoil the surprise for others, but the narrative hinted at in the three of cups is clearly continued in other cards.

In another refreshing twist, the Sun card shows a young Pygmalion liberating his Galatea from a block of marble (or is it ice?), in a metaphor of Sculptor as Sun, as illuminator and life-giver, as agent to reveal the hidden, intrinsic nature of things.

In addition to fresh insights on interpretation, as promised, the card images offer jarring tricks of perspective. Linear Perspective in drawing was of course, a contribution of the Renaissance, and Leonardo was a master of it, and contributed the smoky distancing effect he called “aerial perspective”. As is only fitting, Paolo Martinelli uses perspective to astonishing effect -- In the Chariot -- which depicts a man flying in Leonardo’s famous glider design (ca 1500); - we, as viewer are on a level with the young man in flight, and we are looking down to a woman on the ground far below waving goodbye. The effect is dizzying.

The Four of Pentacles also deserves special mention -- here is a man dragging a sack of gold down a path, while being pursued by a bull; he cannot contrive to give up his money to save his life. Here the image appears through a very curved viewing lens, of curvelinear perspective. It creates a disquieting sense of distortion.

In yet another odd viewing angle, and arguably the most daring, the Nine of Swords and the King of Wands have completely reversed the stations of object and viewer. In the King of Wands, the viewer is in the position of the canvas being painted, and it is we who are being smeared red by the painter’s brush. Even more dramatically, in the Nine of Swords, we are on the inside of the painting looking out through the frame and its bullet-proof glass, to the visitors in the Louvre. Their noses and hands seem plastered on the glass. It seems as though we are in a sort of real-life fish-bowl, ŕ la Jim Carrey in the Truman Show. Fantastic!!

The artist has also made powerful use of colour and light and shadow for otherworldly effects -- in the Seven of Swords for example, a cat is sneaking up on a mouse --- the cat's eyes glow demonically red, and he throws a spiky shadow against the stone wall, . The mouse’s tail is segmented, tentacular, like an octopus arm, and he is strangely illuminated from a glow in the corner. The combination gives a most delicious impression of something monstrous about to happen.

The meanings offered in the LWB though epigrammatic, offer unusual insights, and enlighten the mysteries of the card images: for example, for the Three of Cups (giving up a child for adoption), the LWB reads : “Kindness may require actions contrary to our basic nature. Sacrifice, dedication, humility.”. For the cat and mouse of the Seven of Swords, the LWB reads: “Ignorance is bliss. Ignorance, misinformation, distraction". .”

As for quibbles, I have only one: I will be taking a permanent marker to the Strength to renumber it XI, and Justice to make it VIII.

The Mona Lisa deck is undeniably fresh and different. Martinello is an artist of spectacular means, and together with McElroy’s adventurous vision, they offer a great wealth of new material, linked to, but at the same time liberated from the tyranny of a RWS model, in a radically new perspective. Perhaps not the deck of choice for a beginner, because to truly appreciate the innovations, one ought first to know what they are building on, however I believe the Mona Lisa Tarot is an extraordinary contribution to the field of tarot, and am very eager to see what other readers will make of it.