Triumphal "car" (chariot), armored warrior, sun/moon symbols, lingam and yoni symbol (the encircled rod on the winged shield), black and white sphinxes/lions/horses, sometimes at rest. A canopy of stars and sometimes a throne inside the car.

The Fool is close to completing what he set out to create long ago, back when the Magician revealed those tools to him. But enemies are now standing in his way, devious human enemies, bad circumstances, even confusion in his own mind. There's no more forward momentum; he feels he is fighting just to stay where he is. Walking along the shore, watching the waves come in, he puzzles over how to defeat these enemies and get things moving forward once again.

It is here that he comes across a charioteer, standing in his gold and silver chariot, his black and white steeds at rest. "You seem a victorious warrior," the Fool remarks. "I feel beset by my enemies, unable to move forward. What should I do?"

"First, you must armor yourself," the Charioteer strikes the chariot and then his breastplate with a gauntleted fist, making both ring out. "Next, you must focus on your goal, where do you mean to go, what do you mean to do." The warrior nods to his beasts. "Your steeds keep the wheels turning, but it is your control and direction of them that gets them to their destination. Dark and light, they must be made to draw in harmony, under your guidance." The Fool nods. That makes sense. "What if an someone or something gets in your way?"

The Charioteer coolly meets the Fool's gaze. "You run them down. Your aim is victory, and to be victorious you must have unwavering confidence in your cause. Never question, never doubt what you're trying to achieve. Never lose your focus or your motivation."

The Fool is impressed and inspired. He thinks he now knows how to get past all the distractions and setbacks that have been keeping him trapped in place, like a riptide in the ocean. He thanks the warrior, but before he leaves, the warrior stays the Fool.

"One thing more you should keep in mind," he says, "Victory is not the end, it is the beginning. Remember that before you decide to enter into any contest."

The chariot is one of the most complex cards to define. On its most basic level, it's about getting what you want. It implies war, a struggle, and an eventual, hard-won victory over enemies, obstacles, nature, the uncertainties inside you. But there is a great deal more to it. The charioteer wears emblems of the sun, yet the sign behind this card is Cancer, the moon. The chariot is all about motion, and yet it is often shown as stationary.

What does this all mean? It means a union of opposites, like the black and white steeds. They pull in different directions, but must be (and can be!) made to go together in one direction. That is perhaps the most important message of the Chariot. Separate the driver form the chariot, the chariot from the horses, the horses from each other and from the driver, and nothing gets done. They all do their own thing. Put them all together, with the same goal in mind, and there will be no stopping them.

Confidence as well as unity of purpose and control is needed, and, most especially, motivation. The card can, in fact, indicate new motivation or inspiration, which gets a stagnant situation moving again. It can also imply, on a more pragmatic level, a trip (usually by car).

Thirteen's Observations on the Chariot

The Chariot is a fascinating card, but also frustrating to interpret. Like Cancer, the crab, it is about being armored, self-reliant and in command of one's own destiny. On the battlefield, a chariot is autonomous. It fights alone, not with other troops or cavalry.

Yet the Chariot is also a symbol of unified parts. If any part is missing - chariot, horses, driver - it cannot go.

The crab moves from one plane to the next (water to land and back again) and the Chariot is viewed as moving likewise, from conscious and unconscious, Earthly to spiritual. Also, like chariots, crabs come upon each other from the side rather than straight on. So there is a tricky element to The Chariot for all that it seems to travel in a straight line.

The Chariot is a card of contradictions. It's about sidewise battles, yet also about full-speed ahead. It's about the hard exterior and the soft interior, the light and dark, the water and the shore, moon and sun. It is the Sphinx, which is also often a symbol of Cancer, the lion and the man united, a mystery.

Yet the Chariot says all these can be united.

The querent who gets this card is likely dealing with a lot of contradictions in their life. Maybe arguing people, or a variety of different feelings. The card says that they must become the driver of the chariot. They must decide on a goal, take control and get all the contradictions to ignore their wants and go where the querent wants.

How can the querent do this? By being confident. The one who has unwavering faith in their convictions is the one who can make others put aside their differences and do as asked. Likewise, such a person can overcome their doubts and uncertainties and achieve victory.

You must have faith that there is nothing that can stand in your way. Note, however, that this unity and the confidence that creates it will last only till victory is achieved. But then, the Chariot isn't interested in unity for unity's sake. Only in unity for victory's sake.

The Chariot is a marvelous card in that it can assure the querent success no matter the odds. But the card also warns that the drive toward this victory might lead to ruthless, diehard behavior, to a desire to win at any cost. The querent should be reminded that winning isn't everything nor "the only thing." It is, rather, the start of things.

Learn the Chariot meaning in reversal in our reversed card meanings. 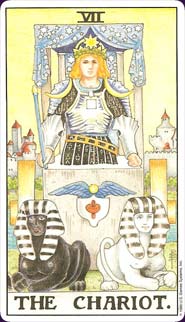 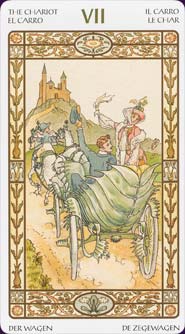 Chariot in the Harmonious Tarot
See more images from this deck 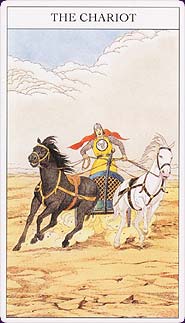