A woman is tied and blindfolded within a cage of swords. This is the "damned if you do, damned if you don't," card. The querent is in a situation where they're afraid to move. If they move, they'll get cut. However, the ropes that bind them, the blindfold over their eyes, are their own fears, keeping them still, immobile. And so the longer they stay, the more they constrain and entrap themselves.

Although the limitation of the eights are meant to transform, there are negatives and drawbacks to this. The Eight of Swords is exactly that. It is what happens when you try to put limitations on words or thought. The motivation behind this may be lofty, to not hurt feelings or keep thoughts on divine rather than base matters. But what ends up happening is that either literally (with censorship) or figuratively the querent ends up feeling like they can't say or think anything.

This card can also indicate your fears of what others might be saying about you. Fears of gossip, criticism, insults.

Fortitude is the only way to transcend this deadly mix of external and internal limitations. Like the Maiden taking the chance of getting mauled by the Lion, the querent must be prepared to enduring pain and disapproval otherwise they will remain trapped and silenced.

Thus, the card urges you to have the courage to speak up or face down what's being said about you. To move and try to get past the swords. The longer you stay mute and still, the worse it will get.

Learn the Eight of Swords meaning in reversal in our reversed card meanings. 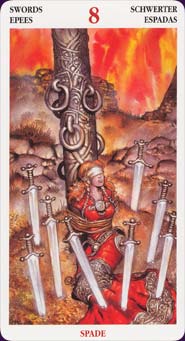 Eight of Swords
in the Celtic Tarot
See more cards