The Fool was given options by the Magician, and decided on one with help from the High Priestess. He learned how to develop it thanks to the Empress. Now it has reached as stage where he must find a way to manage it. How to do this?

He approaches a great Emperor seated on a stone throne. The Fool is amazed by the way the Emperor is instantly, eagerly obeyed in every particular, at how well his Empire is run and organized.

Respectfully, he asks the Emperor how it is he does this. And the Emperor answers: "Strong will and a solid foundation of laws and order. It's all very well," he explains to the Fool, "to be imaginative, creative, instinctual, patient; but to control one must be alert, brave and aggressive."

Ready now to lead and direct rather than be led, the Fool heads out with new purpose.

The Emperor, as Aries, the Ram, naturally follows the Empress. On the one hand, he is Mars (the planet that rules Aries) to her Venus, her lover and compliment, father to her mother, civilization to her nature, imposed order to her artful creativity. He is the "All Father" giving his children the structure they need in their lives to help them become responsible adults.

Aries is also, however, the first sign of the Zodiac, metaphorically the "infant." Like an infant he is filled with enthusiasm, energy, aggression. He is direct, guileless and all too often irresistible. Unfortunately, like a baby he can also be a tyrant: impatient, demanding, controlling.

In the worst of circumstances, the Emperor is a despot, imposing his will capriciously on his subjects. In the best of circumstances, he signifies an intelligent, enthusiastic leader that everyone wants to follow, the great monarch of an orderly, lawful, thriving Empire.


Thirteen's Observations on the Emperor

The Emperor card is the "Who's the boss?" card. It is an important question. The meaning of the card includes being in control over your environment, your body, your temper, your instincts, your love life. This card gives the querent permission to be aggressive, brave, bold and in command.

If the card doesn't seem to indicate the querent, it could be emblematic of their father or a father figure who was, is or will be in their lives, a leader, employer, teacher or partner. This could be either type of father-figure, the demanding tyrant, hated and feared, or the charismatic leader, respected and admired.

The Emperor can also be a warning to the querent to think about whether their Empire has become an unwelcome chore. If it has, are they now a bad leader, demanding, unreasonable, unhappy? It might be time to abdicate the throne.

If, however, what the querent is building has merely gotten to a point where it's outgrown the nursery, then the advice is to switch from loving mother to structured, organized father. To set down laws, discipline and rules, to plan out the future and lead the way.

Learn the Emperor meaning in reversal in our reversed card meanings. 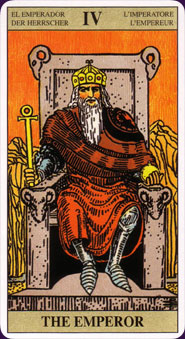 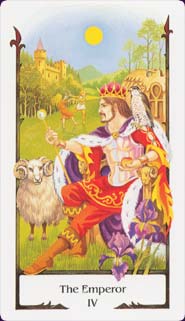