The Justice figure seated or standing between pillars, scales in one hand (usually left), upraised sword in the other hand. Sometimes blindfolded.

The Fool is looking for a new path, a new aspiration and inspiration for his life. Sitting uncertain at a crossroads he notices a blind wise woman listening to two brothers argue over an inheritance. They have come to her for judgment. One brother has the whole inheritance, the other has nothing.

"I ask that all of it be given to me," the poor brother demands, "Not only because I have a better right to it, but because I will not be wasteful with it, as he is!" But the rich brother protests, "It is rightfully mine and that's all that should matter, not what I do with it!"

The woman listens, then awards half of the rich brother's inheritance to the poor brother. The Fool thinks this only fair, but neither brother is happy. The rich one hates losing half his wealth, and the poor one feels he ought to have gotten all.

"You were fair," the Fool remarks to the woman after the brothers have left. "Yes, I was," she answers plainly. "With only half the inheritance, the rich one will stop being so wasteful. And the poor one will have as much as he needs. Even though they cannot see it, this decision was good for both."

The Fool thinks on this and realizes that he has spent his life achieving worldly ambitions and physical goods while leaving his spiritual self to starve. He ought to have given half his time and energy to his spiritual self, but he didn't. It's no wonder that he feels unbalanced. Thanking the woman, he heads out to restore equilibrium to his inner scales.

With Libra as its ruling sign, Justice is about cold, objective balance through reason or natural force. This is the card that tells the querent that excesses have consequences. Indulging in drinking and drugs will affect their health, just as excessive exercise can damage muscles and joints and working too much can make one neglect family and friends.

Justice urges the querent to make adjustments, do whatever is necessary to bring things back into balance: physically, emotionally, socially, spiritually. In a more mundane sense, this card may signal a court case, legal documents, adjustments in a marriage or partnership. The outcome of all of these may not be exactly what the querent wants, but it will be what they need. It will also be scrupulously fair. If the card is reversed, it can indicate bias, obstruction of the law, or legal complications.

I think Justice is a good card (as compared to Strength) to stand as the first of the next ten cards of the Major Arcana. The reason I think it right is because with it we move from the physical world (first ten cards) into the metaphysical world (next ten). When I look at Justice, I always see the two worlds balanced on her scales. "You've spent all your time in one," she seems to be saying, time to move into the other and balance things out."

One thing to remember about the Justice card is that it is not about punishment, good, bad, right or wrong. It is about adjustment. The sword suggests that sometimes this won't be pleasant. Justice pares things down with that sword so that the scales end up equal. Swords represent the mind and suggest that Justice only listens to reason, logic and facts. She will not be tricked by appeals to emotions or passions, nor bribed for that matter. She will be rational and cool-headed.

The message is to that you must be cool-headed as well, and do what's necessary, no matter how hard, how disagreeable, in order to gain, or re-gain equilibrium. It is not a nice card, but it is a very wise card.

Learn the Justice meaning in reversal in our reversed card meanings. 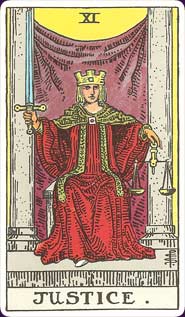 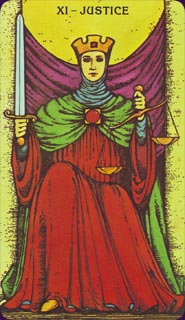