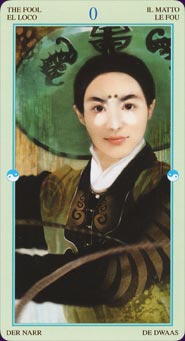 The China Tarot is a re-release of the Chinese-published Der-Jen Tarot by Lo Scarabeo. The majors are rather beautiful atmospheric paintings, and the minors are similiar in feel but feature Chinese suit emblems instead of illustrated scenes.


Card Images from the China Tarot 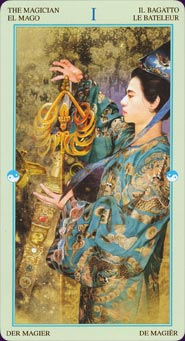 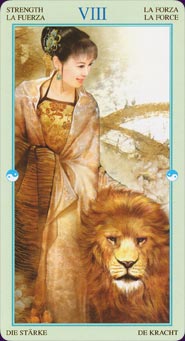 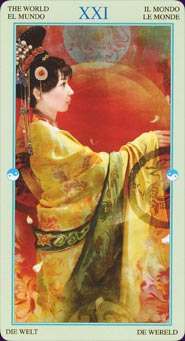 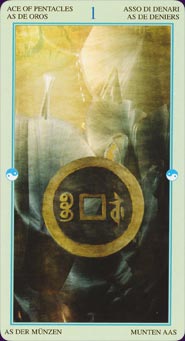 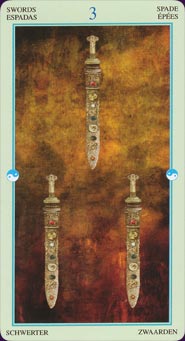 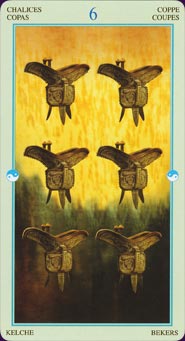 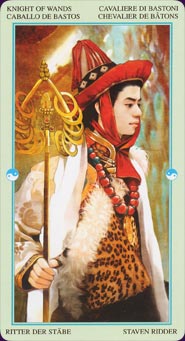 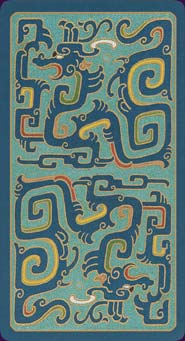 “The magic, charm, excitement and poetry of ancient China.”

Originally published a few years ago in China as the ‘Chinese Ladies Tarot’, these Tarot images by Der Jen have been reprinted again, this time by Lo Scarabeo.

The major arcana feature young, attractive men and women (mostly women), dressed in traditional Chinese costumes. They are in set luxurious surroundings, wearing silk robes, rich jewelled combs and decorated head-dresses. All their faces are life-like and photo-real – some almost look like photographs - and are very pale and blushed with pink on the cheeks. I really liked the pose of the High Priestess, the way she has her hands held flat just beneath her closed eyes, like she sees beneath the surface.

There is personality in the major cards, and the Knave, Knight, Queen and King court cards are similar. It’s nice to see the energy and personality of the courts reflected in the image: the Queen of Chalices is dreamy, the Knight of Pentacles look cautious, the Queen of Wands looks confident, and the Knight of Swords looks full of wild energy. (The Queen of Swords does also look friendly and approachable, but on the whole they are an accurate reflection of the archetype.)

The minor arcana are not illustrated scenes like the Rider-Waite or even decorated pips as in the Marseilles; just simple arrangements of suit elements on a plainly coloured background. While the suits are labelled Chalices, Pentacles, Wands and Swords, the cards depict Chinese-style suit elements. Chalices are ornate, saddle-shaped vessels with carved decorations on a yellow and dark green background. Pentacles are Chinese coins with the hole in the centre, on a black and beige wash. The Wands are gold and have crown-like ringed top, and are set on a bluish-green and brown background. On the Swords cards, all of the swords are set in gold scabbards set with rubies, emeralds, and coloured stones, and placed vertically against a warm yellow-reddish-brown colour blend.

There are blue-green borders surrounding the tarot images, which also contain small blue and white yin-yang symbols halfway up the verticals. They’re a little distracting as they overlap the tarot scene itself; the colours don’t really match; and the illustrations themselves look Chinese in style without needing the yin-yang symbol to make it obvious. The backs are reversible, and have a blue stylised Chinese dragon mirrored on each half of the card, with accents off yellow, blue and green.

In the usual format for a Lo Scarabeo companion booklet, this booklet has explanations and keyword card meanings that are simple - and fairly extraneous. The most interesting part is the three original spreads: the Spread of the Five Forces, the Tai Chi Tu Spread, and the Spread of Changes.

The China Tarot is a youthful-feeling deck, with appealing Eastern-themed illustrations in the European tarot tradition. I would have preferred to see similarly illustrated minor arcana cards rather than repetitive pip cards it does has, but it’s still a workable and very attractive deck.

First and foremost the China Tarot is an art deck - and how can it not be – the art is stunning. Each of the depicted figures is both animated and life-like. Der Jen is a definitely a talented and gifted artist.

The detail on the Majors and Courts brings the characters to life. One of my favourites for this reason is the Knight of Pentacles. It’s not the best image in the deck, but it does convey the sort of preparation and thought that I associate with the card. Not all the images are successful. Death and The Chariot seem rather muddy. This could be partly due to them being further away from the frame and partly due to the muddy colours. Most of the other cards are clear and vibrant and these stick out as they aren’t.

The deck has non-illustrated pips – actually the pips are illustrated with their corresponding symbols arranged into patterns. The textured backgrounds and detailed rendering on the symbols manages to make them visually stimulating when laid out in a spread.

The problem that is often found with non-scenic pips is that with no imagery to work from you often need to rely on formula or memory to get that spark of meaning. And if you’re memory fails you may turn to the LWB. And with this deck you’ll be glad you did.

The LWB contains a good breakdown of the meaning of the cards. There is: a mini introduction to tarot; the meanings of the Majors; an explanation of the numbers and the courts; finally meanings of each of the Minors.

Being a LWB this is not exhaustive but it does give those new to tarot or new to reading non-scenic pips a good foundation from which to construct a reading. The LWB also contains three strong custom spreads that are worth trying out.

As I said at the beginning this is deck is primarily going to appeal to those who love art decks, as well as collectors, and fans of Chinese culture. But it should also be of interest to those wanting to read with a non-scenic pip deck.