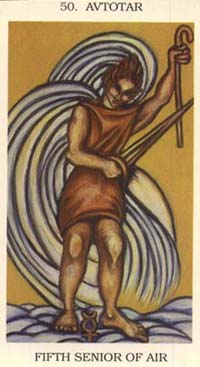 The Enochian Tarot deck is based on the Enochian magickal system, a form of ceremonial magick. The deck has 30 major arcana cards instead of the usual 22.


Card Images from the Enochian Tarot 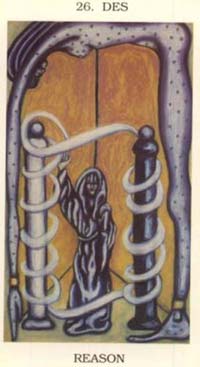 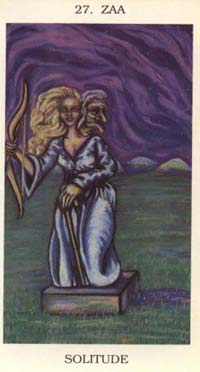 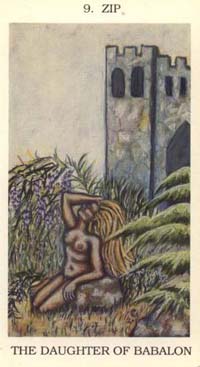 The Enochian Tarot is a more than slightly non-Traditional Tarot deck. It consists of 86 cards, numbered from 1 to 86. Cards number 1-30 constitute the Major Arcana, while cards number 31-86 constitute the four suits. The Enochian Tarot is based on the writings of Dr. John Dee, who is said to have received information about the Enochian Magic system from t he angelic realm, who spoke to him through his psychic partner Edmond (or Edward) Kelly.

The universe as John Dee presents it does not follow Qabalistic thought (i.e. the Tree of Life). It consists of two parts: four Great Watchtowers and thirty Aethyrs or Aires. Each of the Major Arcana cards portrays one of the Aethyrs. The Enochian Tarot system employs a system that represents the universe, which, while is differs from the Qabalistic system, is along the lines of Tarot and can justifiably be termed a Tarot deck. I do recommend buying the deck and book together because of this. If you buy them separately, as I inadvertently did, the companion book, by Gerald Schueler, is entitled Enochian Tarot.

The Enochian Magical system when it first came into being (during Elizabethan times) was primarily used for ritual magic. It is interesting to note that the material was given to Dr. Dee, through Edmond Kelly, in the Enochian language ( or the language of the angels). This system was expanded on by the Golden Dawn, and Aleister Crowley, to include astral travel to the region s described on Holy Tablets by the Angels to Dr. Dee.

One of the interesting notes about this deck is that the authors encourage reading the cards as groups, rather than as isolated cards. From the book: "No card has real meaning in and of itself, instead each card has multiple meanings. Some cards have meanings that can be good or bad, depending on the situation. The interpretation of any given card should be determined in large part by the positive or negative aspects of the cards around it. "

Following are a few of the definitions the authors have placed for the cards - the descriptions are short, and make no reference to the symbolism on the cards.

The suit cards (pips) are named from Higher Sephirothic Cross Angels to Demons for each of the four suits. The numbering of the Minor Arcana is from the most spiritual to the least spiritual.

The cards themselves are 3" by 5 1/2" - a little large for comfortable use for those with smaller hands. They are of high quality, glossy cardstock and will stand up to use. The backs are a burgundy color, with what I take to be a graphic of the Enochian world in the middle. The cards would not be able to be read as to upright/reversed until they were turned over.

The spreads presented at the end of the book are a three card Enochian Spread, defined as past-present-future; a three card Pyramid Spread; the ten card Celtic Cross Spread; a five card Pentagram Spread; an interesting spread called a Thirteen Card Layout that takes the form of three triangles, each within the other; a seven card linear spread called the Seven Card Enochian Spread and a ten card Tree of Life Spread.

There is also a chapter on pathworking including several ritual processes. For those that seriously want to work with the Tarot for spiritual, as well as personal progress, this chapter works well.

I don't recommend this deck as a general reading deck, but for spiritual readings or for personal/group magickal work, I feel that it would do well.