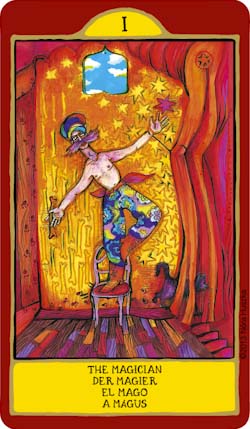 The Gypsy Palace Tarot is a 78-card deck with incredibly vivid images, exploding with colour and movement. The cards are non-traditional and somewhat abstract, filled with both real and imaginary creatures, and intended for both tarot and creative games. The deck is the result of a successful crowdfunding campaign, and is now self-published by the artist. 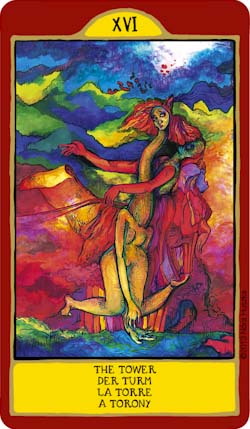 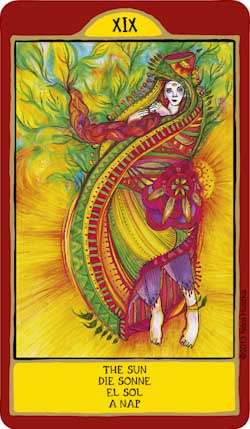 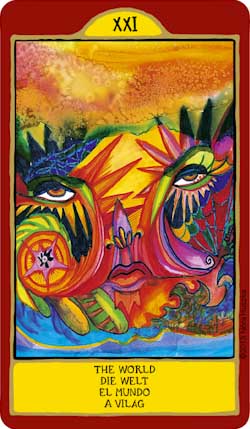 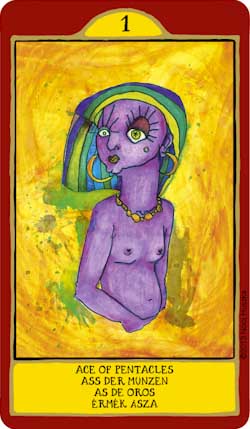 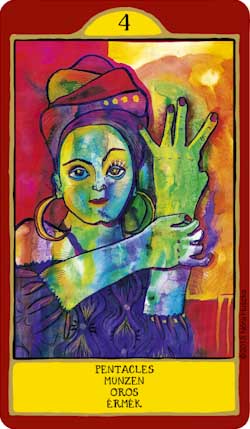 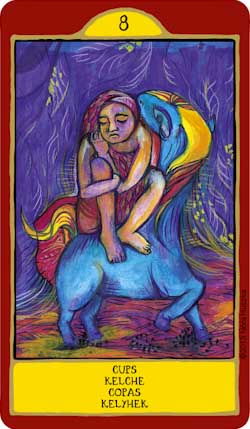 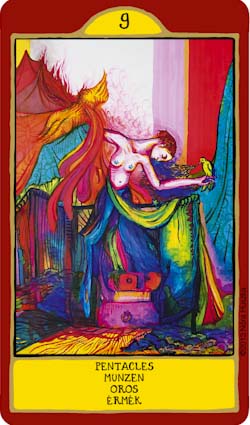 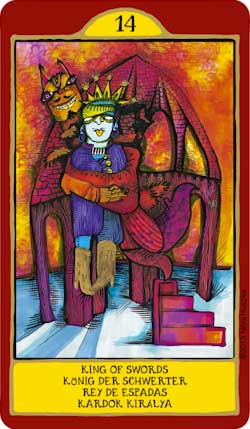 The Gypsy Palace Tarot is a 78-card deck following traditional structure – the Major Arcana titles follow traditional lines, with Justice at VIII and Strength at XI. The four suites are Wands, Cups, Swords, and Pentacles, with the Court Card titles being Page, Knight, Queen, and King.

There is no companion book currently, although one is being worked on. In place of a companion book is a beautifully written two page “booklet”. The cover is the same as the cover of the box, while the back page shows a picture of Nora, along with publication information. Inside, the left hand page presents the reader with a unique spread to be used with this deck, entitled the “Caravan Spread”. I love the thought behind this spread, which features the four directions, a position for self, and positions for the Sun, Moon, and Stars. Before any cards are laid down, it is suggested that the reader make note of the first Ace from the bottom of the deck. The suit that this Ace represents will define the root of the spread. This certainly adds depth to the reading of the spread itself!

The right hand page contains a message from Nora. She notes that this is a Limited Edition version of her deck, and that the intention is to guide the reader to discover new, unexpected dimensions in both their fortunetelling ability, and their ability to connect with their intuition and creativity. (Aside from card readings, Nora encourages readers to use this deck in creative card games with family and friends.)

I love what Nora has to say about opening one’s mind, heart, and senses! I also love that all of this is handwritten, and not typed. It brings a different flavor to the table … one the encourages that inner child that perhaps does not get to come out too often!

The cards themselves are 2 ľ” by 4 ľ”, and of good quality card stock. (They will stand up under repeat shuffling.) The backs are a reddish-brown color, with a thin black border inset Ľ” from the edge of the card. Inner imagery includes an interesting center made up of four eyes – two green eyes, side by side, and two blue eyes, one centered above the green eyes, and one centered below them.

The artwork is done in bright, vivid colors that jump off the page without overwhelming the physical lived! The imagery itself is abstract, but interesting and “believable”. Yes, there are fantasy creatures in this deck, but they “belong”. The inspiration for these cards comes from Balkan folk art and other Far Eastern art, and from tales and fables.

Nora has combined her love of art, her love of Tarot, and her love of people into a traditionally based Tarot deck that takes one beyond the borders of the physical world into the worlds of intuition and imagination. It is a wonderful deck for children and adults alike.

One of my favorite cards is the World, where Nora personifies the earth as a living thing. The Devil shows a unique touch in that, amongst other things, we see a female figure in white (indicative of innocence and spirituality), conversing with a male figure in red (perhaps representing the Devil). The Empress is a colorful figure with an almost “Fool like” quality. The Two of Cups makes me laugh out loud – a happy looking female figure seated in front of two cups of coffee – one red cup, and one blue cup.

This is a deck t hat I feel will be enjoyed by all who choose to work with it. My personal kudos to graphic artist Matthias Furch for the tremendous job he did with bringing out the vibrant color in this deck.