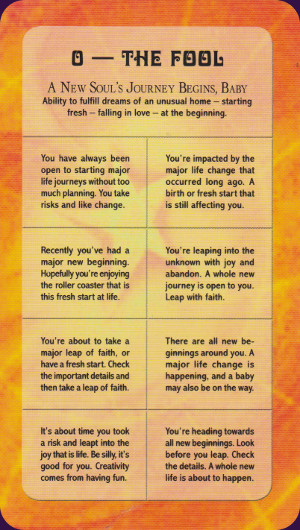 My First Tarot is a straightforward, text-based set of 78 tarot cards, entirely without illustrated tarot symbolism. Each card features keywords plus a simplified set of eight divinatory meanings, which are chosen according to the card's position in a spread.


Card Images from the My First Tarot 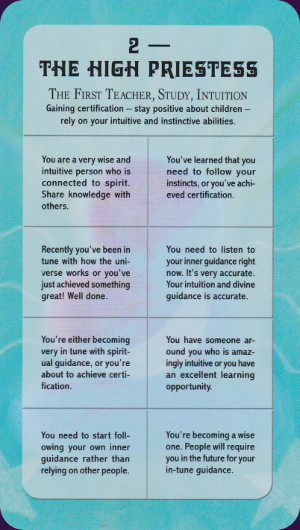 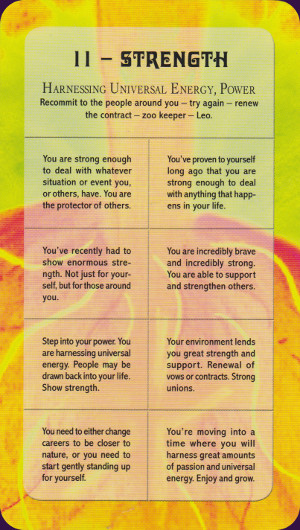 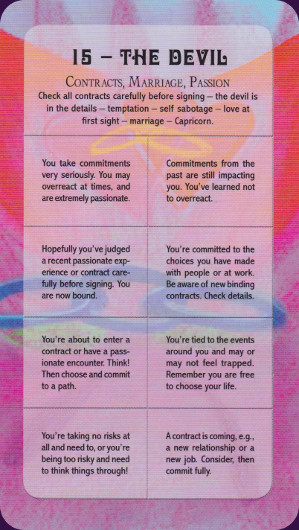 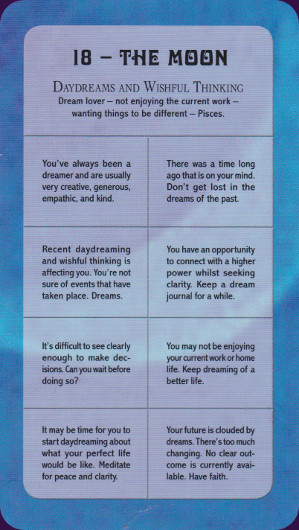 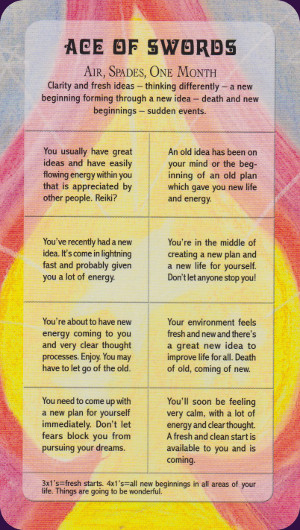 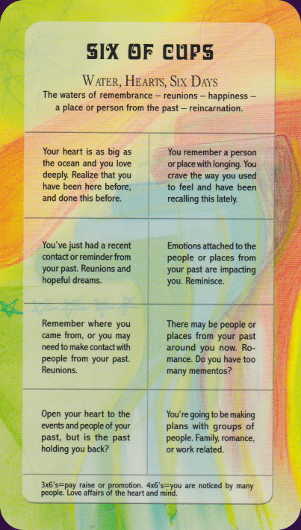 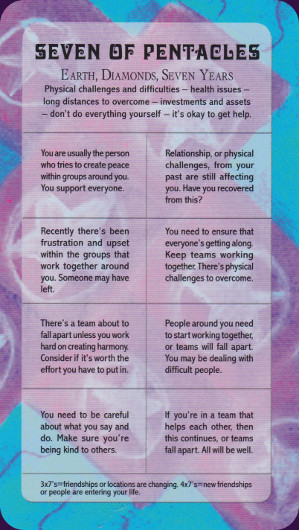 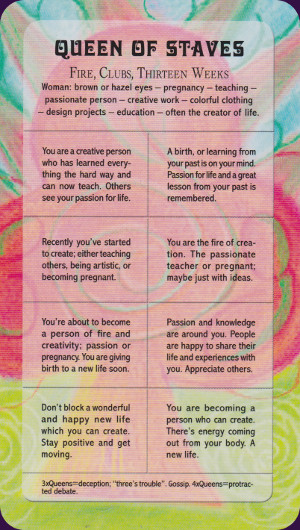 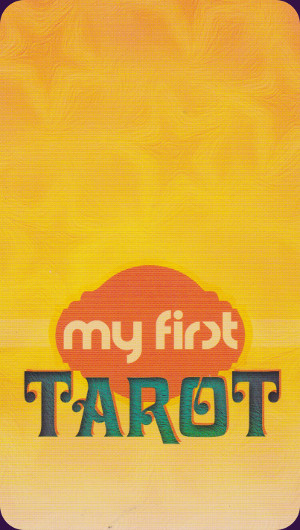 My First Tarot Review by medusawink

There are many tarot decks that feature writing as part of the overall presentation such as the Hexen 2.0 which has many concepts and buzzwords incorporated into and forming its illustrations, The Beginner Tarot which gives upright and reversed meanings at the top and bottom of the central illustration, and The Tarot of The Bastard which has the option to have keywords printed into the frame around the illustrations. However, none come close to the unusual concept embodied in My First Tarot. This deck has no central illustrations whatsoever, but rather features a framework containing divinatory meanings which can be read in conjunction with the position the card falls into, in a specific layout. It is in a sense a post-modern deck, the tarot deck you have when you don't have a tarot deck.

Part of the idea informing this deck is that when shorn of images only the meaning remains. Having said that, it would be beyond unwise to dismiss tarot images is merely garnish – they are powerful psychological and occult prompts and cues that help connect the reader to information which is not readily at hand, or obvious. The images also provide a focus for connection with the divine, and have a curious habit of guiding the Seekers attention to seemingly insignificant details which often prove to be the key to unlocking bigger truths. Which is not to say that this deck is in any way a failure, it is in fact a unique and successful way to divine meaning through oracular cards.

This is a 78 card deck, featuring a Major and Minor Arcana. The Major Arcana has 22 cards with titles and ordering following the standard set by A E Waite. The Minor Arcana has 56 cards in four suits – Cups, Pentacles, Staves, and Swords. Each suit has 10 number cards and 4 Court cards – Page, Knight, Queen, and King.

The cards measure 68 x 120 mm, which makes them slightly narrower than some decks on the market, however they are not unusually sized. They certainly have a nice feel to them and sit comfortably in one's hands. Their smooth, high-gloss finish facilitates easy handling and shuffling.

The cards are finished with a bright blue, foiled edging which adds an attractive dimension to their presentation. The card stock is excellent – sturdy yet lightweight, and flexible without being notably flimsy, and well-sealed - they will withstand frequent usage without sustaining damage or being prone to creasing or peeling.

The print quality is excellent. The font is simple, clear and crisp, with no misprints or blurring. Each card has its own unique background design which reinforces the character embodied by the card’s meaning. These are not distinctive illustrations in the traditional sense, but rather shapes and patterns in watercolour, pastels, or perhaps paint-pencils. Occasionally the Major Arcana feature cards a non-intrusive symbol subtly placed in the background, which adds substance to the cards divinatory meaning. The Minor Arcana cards have faint symbols worked into the overall background pattern.

The colour schemes for each card are varied and fairly much cover the brighter end of the spectrum with shades of orange, pink, blue, green, and yellow dominating designs.

The art style is cleverly un-intrusive, and is of the type often found in mass-market new-age books – soothing, attractive, undemanding. Each image somehow seems to be a small part of a larger image, or conversely something enlarged to the point of being slightly out of focus – either way it is familiar yet tantalisingly out of reach. The image on the back of the cards simply reads My First Tarot on a background of yellow and orange stars. It is not reversible, but then again neither of the cards.

The cards come as part of a box set, which is, as always with Schiffer Publications, exemplary. The box is solid cardboard with a fold back lid; magnetic clasps keep the box shut, a loop of yellow ribbon is provided to lift the top open, and yellow ribbon hinges keep it from gaping wide. The cards themselves come sealed in plastic, sitting in a cardboard well, with a layout map and guidebook placed on top of them. The box is bright yellow and orange with a satiny, matte finish, and printed with the deck’s title and information about the cards. This box set is sturdy and will withstand the rigours of travel or frequent handling without sustaining too much wear and tear.

The 64 page guidebook is written by My First Tarot’s conceptual originator Eleanor Hammond. She begins by listing ideas for blessing and protecting your cards, this is followed by instructions in how to use the cards for a reading. Here one uses the map provided, then shuffles the cards while focusing on a question (or not), cuts the cards according to one's personal choice, then lays the card out in positions 1-8 as dictated by the map. Similar to all layouts each position addresses a specific issue; the seeker reads the divinatory meaning on the card which corresponds with the cards position on the map. The guidebook goes on to explain how to read the cards in conjunction with the map, what each position on the map represents or means. This is followed by an entry for each card – Major Arcana and court cards generally have a little bit more information than the number cards of the Minor Arcana.

In line with traditional tarot each card has a title and number, it also has a short description and keywords or phrases. The Minor Arcana cards also give clues to time frames; Cups focus on days, Pentacles define years, Staves – weeks, and Swords – months. The guidebook expands on this, but given that predicting timeframes using the tarot is notoriously difficult, the author is careful to explain her system. Kings and Queens from each suit can represent men and women of specific appearance and have traditional hair colour and eye colour combinations.

The divinatory meanings these cards represent are fairly traditional and do not attempt to assign any radically new definitions. While the interpretations tend to focus on the positive, cards which represent sad or negative issues are given their due. The advice given on these cards is solid, considerate, kind, and positive. Each card has its own separate entry in the guidebook which gives a general expanded insight into the meaning of the card, however all the specifics are printed on the card itself.

This is a wholly original approach to tarot, and as such absolutely fascinating in its execution and application. Absolutely anyone, from complete novices to experienced tarot readers can use and benefit from this deck. My First Tarot breaks new ground in tarot reading. If you find the thought of using a fully illustrated 78 card tarot deck daunting, then this is the starting place for you. My First Tarot will guide you into the world of tarot card reading without overwhelming you, and you will receive authentic tarot readings and wisdom.

However, if you are a reader of experience who is suffering from a little 'tarot fatigue’ then this is a fascinating deck for your day off, in that you can use it without fear of compromising your reading. This deck is a surprising and satisfying entry into expanding new horizons of tarot card reading.


Complete Details of My First Tarot


Similar Decks to My First Tarot