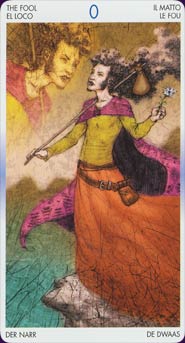 The Tarot of Reflections is designed for introspective readings and 'shows the different aspects of the reality we live in'. The 78 cards feature a reflection of part of the main image elsewhere in the sky, background, or costume, and take some liberties with the Rider-Waite standard.


Card Images from the Tarot of Reflections 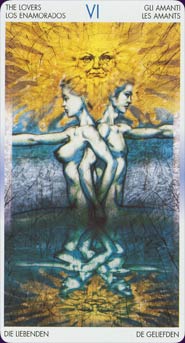 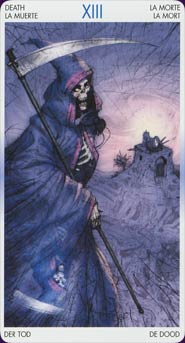 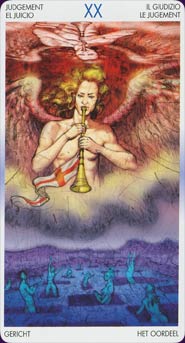 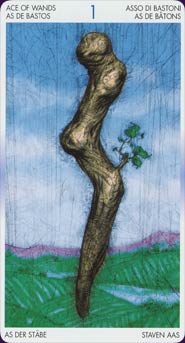 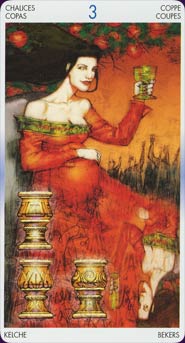 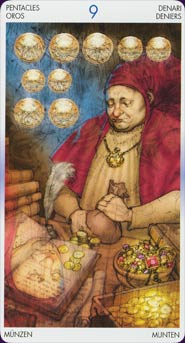 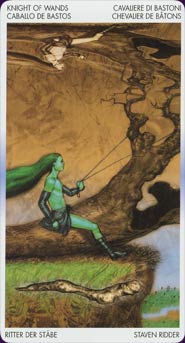 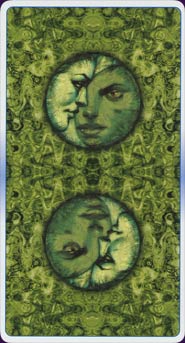 Tarot of Reflections Review by Solandia

"The title and the 78 Arcana of the Tarot of Reflections evoke the idea of reflecting something: not people or objects, obviously, but allegories of all kinds of situations of human life. Experiences, conflicts, desires, fears and hopes are condensed, or better still literally reflected..."

Francesco Ciampi is behind the art for the Tarot of Reflections, a dream-like Tarot of vivid colour and slight disconnection from reality. Some cards seem hyper-real in colour and sharp detail, taut with tension in facial expressions, while others are more dream-like and with fuzzed, indistinct edges and softer colouring.

The major arcana in the Tarot of Reflections are traditionally titled, and order Justice at VIII and Strength and XI. The suits are the normal Wands, Chalices, Pentacles and Swords. The illustrated Wands are knobby, knotted tree limbs that look more like clubs, and the Pentacles are disc-like golden shields with different geometric shapes. The minors have fully illustrated scenes, and the numbered cards have the suit emblems as an overlay or separate part of the image. The minors are not exact in scene but are similar in concept to the Rider-Waite; some cards are very reminiscent of their RW counterparts.

The reflections that are the theme of the deck aren’t that obtrusive or in your face. They might appear super-imposed near the face of the Fool, in the skirts of the Hierophant, reversed and placed near the top of the Six of Chalices, doubled and behind the King of Swords shoulders, mirrored in the background of the Knave of Wands, reflected below as though in water (Three of Pentacles), or as two parts of the scenes, as in the Six of Pentacles where he is giving to and receiving from himself.

My favourite cards of the deck are the Six of Swords and the Hermit. The Six shows a person poling their boat into the future, their head bowed. A damaged bridge slightly behind the figure suggests the broken ties now left behind. The Hermit has a Death-like feel, wearing as he is long black robes with tattered ends. He stands atop a large rock and shines his light into the abyss. The Four of Swords is an interesting interpretation: a muscled man with a sword is chained by the arms, and fights against the restraints. It’s not very restful or suggestive of relaxation – here it seems like an unwanted rest is being forced upon him and he is fighting it with his every muscle and sinew.

There are also cards that tip from dream-like towards the nightmarish end of the scale. The Hierophant has a pinched, white face, bony chest and collarbone, and a tight lemon-sucked mouth, and he holds tightly to his staff of power – no empathy there. The Devil is quite evil-looking; very satanic with horns, and angular goat’s skull face and a billygoat-like beard.

The companion booklet has no keywords or reversed meanings following its short introduction, just an explanation or piece of descriptive advice for each card. The unique spread included for this deck is the Method of the Mirror, which uses the majors split into four smaller decks, the minors split into four, and the top card of each pile turned over and interpreted. A sample of the included meanings:

XIII – Death. Everything is destined to end sooner or later, but something always remains, even if it takes on a different shape. Look beyond appearances and you will discover new realities.

Nine of Pentacles. Greater gain is obtained by investing money that does not exist yet. Know that the fear of risk could cause you to make serious mistakes.

The faces of the cards have white borders with the standard Lo Scarabeo six-language titles. The backs have a very green design.

I quite like the more adult imagery of the cards; the over-saturated hues and the strong colour washes; the overall effect of a technicolour dream. The ‘mirror of existence’ that is the Tarot of Reflections is an interesting deck for introspective, inner-focused readings.

"This game of reflections causes us to immerse ourselves in the complexity of reality, not se we become disoriented but rather to help us better understand ourselves and our fellow man."


Complete Details of Tarot of Reflections


Similar Decks to Tarot of Reflections