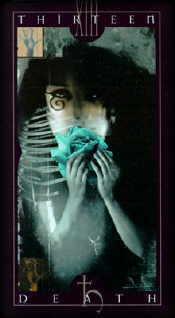 The Vertigo Tarot is a modern, slightly surreal and very gothic Tarot deck with dark artwork. By comic-book artist Dave McKean, it is a very popular deck and has been hard to find - but is to be republished in 2008.


Card Images from the Vertigo Tarot 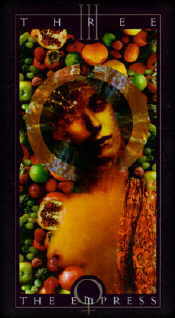 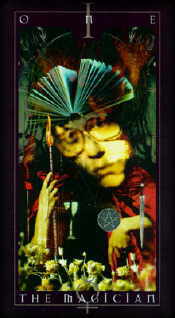 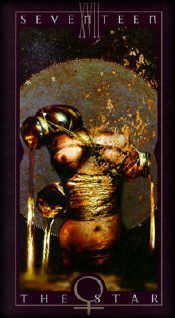 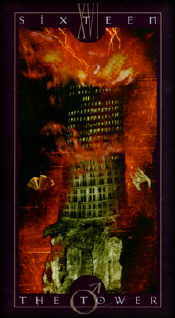 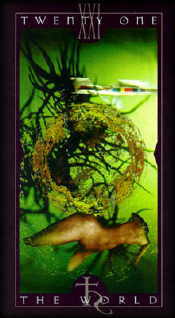 Vertigo is a stunning deck, and the online scans do not really capture the rich colours of the cards. The photomontage style is typical Dave McKean, those who are fans of his work will probably love Vertigo, although this is an excellent reading deck on top of an artistic deck. Although this was my first deck, beginners may want to be careful with Vertigo as it departs from the Rider Waite deck in a number of ways.

Firstly, the astrological associations are very different from the Golden Dawn’s assignations. Not all astrological signs are considered, and furthermore, some planets are visited twice (Venus = Empress and Star, Jupiter = Emperor and Wheel of Fortune).

The pips are also abstract, following more in the tradition of Thoth than Rider Waite. They are not as abstract as Thoth as some cards contain faces, but overall, they are similar in that their meanings are easily tied to numerological concepts. Hence, they are very intuitive and their meanings can depart greatly from more ‘traditional’ decks. While Pollack’s suggestions for interpretation are helpful, I have found over time that the minors in Vertigo are really quite complex and flexible, more so than other decks. What is also noticeable is the strength and originality of its wands suit, and also, the bravery and honesty indicated by its swords suit. Other decks place more emphasis on strife and conflict with these two suits, although Vertigo is not without cards depicting such.

Finally, the majors also depart somewhat from the traditional meanings in that new slants and layers are added. For example, Justice wears a gas mask, and the scales hold crudely drawn representations of eyes. Above, is the face of a young boy and a newspaper bearing the words: sense of justice, suggesting that our concepts of ethics are constructions that are largely feeling based, rather than rules drawn from objective principals. It is not necessary to know the characters depicted on the majors and not every major includes a Vertigo character, although such knowledge does aid understanding.

One very unique aspect of Vertigo I find, is the ease in which the cards interact with each other. It takes me no effort to see for example, the waters of the Star spilling into the 8 of Cups, or Strength reaching up with her arms to hold the Lovers apart. It makes it very easy to perceive a spread as a whole and to chart out with a glance, the dynamics between each card. Thus, Vertigo is very well adapted to a more dynamic, holistic style of reading. I have yet to find another deck that accomplishes this with so much ease on my part.

Vertigo is often described as dark, but I would say this quality is derived from its introspective and commanding nature rather than any morbid or negative tones. I often think of Vertigo as the ‘artist’s deck’ because of an underlying theme of creativity, imagination and questioning. I find it is best suited for readings that require great concentration, for it is not nearly as straightforward as Rider Waite or even Thoth, in my experience. Even if it is spelling out something clearly for me, its cards have always forced me to excavate a wealth of deeper meanings underneath...

I'm a Vertigo Comics fan, and I was thrilled to see this deck reissued.  Dave McKean's art is lovely and evocative, very dark and full of symbolism while still leaving the reader a lot of room to wiggle and interpret.

Most of the major arcana are characters from the Vertigo comics.  While they're certainly usable by those that aren't fans of the comics, the irony of Delirium as Temperance and the rightness of John Constantine as the Fool add another layer of meaning for those that know these characters.  In a deck full of chilling art, familiar faces can welcome the reader in and make her at home.  This deck is not for the beginner or the faint-hearted; many of the images can be chilling, and the art -- while lovely -- can indeed be ambiguous and hard to understand.

I am also happy that the backs of the cards don't have a readily apparent top or bottom.  Dealing or flipping out cards in an unbiased manner is much easier with card-backs that are hard to orient.  Moreover, the spirals and nautilus shells of the back design reinforce the introspective theme of the deck.

Unfortunately, the cards themselves are a bit flimsy; they must be shuffled and handled carefully.  The reissue set is packaged in a large box with a book, and the cards do not have a smaller box of their own.  The book is very well-written and informative about the tarot in general as well as the Vertigo Tarot specifically, though the print is absolutely miniscule.

Though this deck has a few shortcomings, it is very well worth the purchase price.  The cards are beautiful and, to many readers, extremely informative.