Water is about movement and flow, making the stability of the "fours" contrary to this element. Which is why it's a card about dissatisfaction. A man sitting under a tree with three cups is offered a fourth by a hand from a cloud. He seems to be staring at the three cups he has, the fourth from the cloud suggesting that he feels unhappy with those three.


This is sometimes called the "grass is greener" card. It indicates discontent. What we thought was wonderful when our feelings were new is now taken for granted. We might even start to find fault with it, become irritated by what we imagine is lacking or wrong with it.

The man under the tree is still, comfortably seated even, but it's clear that his feelings are restless. Think of those who stew in their emotions, grumbling and grousing, maybe wasting their time drinking or spending too much time on the internet. He's too locked in habit and routine to move, but habit and routine no longer give him comfort. He is dissatisfied and bored.

The querent might be on either side of this stagnant relationship, the man under the tree or the unappreciated cups. Either way, something must be done to bring these feelings out into the open and change them. There is still time to salvage the relationship, but that time is running out.

Learn the Four of Cups meaning in reversal in our reversed card meanings. 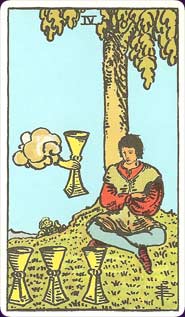 Four of Cups
in the Rider-Waite Tarot
See more cards