This card, with its four wands holding up garlands, implies that the foundation is finished and ready to be developed. It signifies the successful completion of a first stage or a first draft, first full rehearsal, first election to a small but significant post. It also predicts that the querent will (or has) enjoyed this moment of completion, celebrated it.

Often this card is read as indicating marriage, this because marriage is seen as the "completion" of the first stage of a relationship. The couple cement the foundation they've laid down with a commitment ceremony.

There is a danger when this card comes up, however, of the querent feeling like they've finished the project when, in truth, they've only finished that first part. Many see marriage as the goal of a relationship rather than the completion of a stage. A reader might do well to remind the querent that while a celebration for having completed this first stage is well deserved, they need to also think of ways to re-energize themselves. There is more to do.

Learn the Four of Wands meaning in reversal in our reversed card meanings. 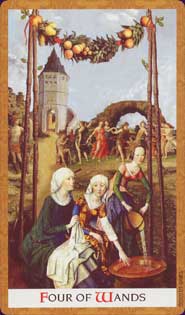 Four of Wands
in the Golden Tarot
See more cards