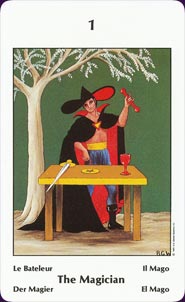 The Barbara Walker Tarot depicts goddesses and gods from mythology all over the world. Positive, negative and in-between deities are all shown, creating a complex deck which can seem a little disturbing to those unfamiliar with the myths. 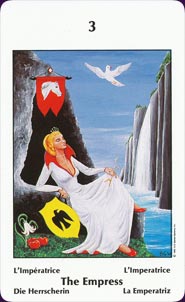 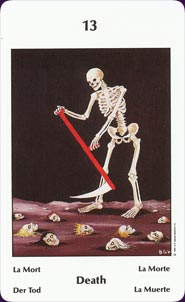 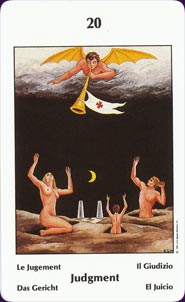 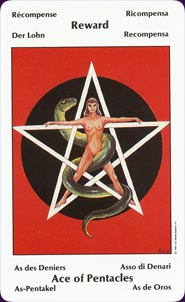 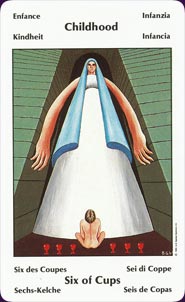 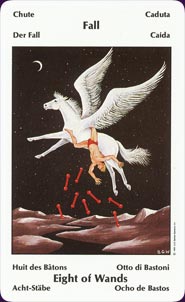 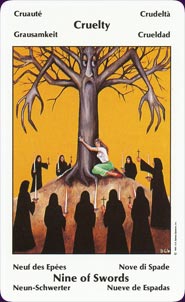 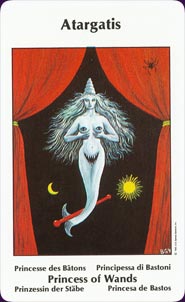 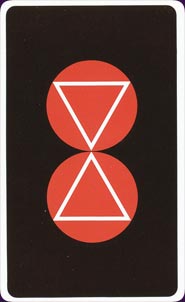 This deck is a companion to Barbara Walker's book, The Secrets of the Tarot, which is an in-depth study of the origins, history and symbolism of the Tarot. It is comprised of the standard 56 card Minor Arcana and 22 card Major Arcana. It comes with a 48-page little white booklet that includes an introduction, general theories of the differences between the Major and Minor Arcana cards, a brief description of each card and its possible meaning in a reading, uses of the cards including a modified version of the Celtic Cross spread, and a detailed explanation of the back design. The meanings do not include a reverse interpretation. As Barbara Walker writes, Each card is open to influence by adjacent cards, and each layout is open to individual interpretation. The best procedure is to study and ponder all possible meanings of each card, digest the information, then relax and let unconscious responses find expression in the reading.

The Major and Minor Arcana are fully illustrated with rich, colorful designs that were hand painted by Barbara Walker. They are finely detailed and realistic. Some of the figures are partially or completely unclothed. For those who are sensitive to this, there is nothing lewd or gratuitous about these depictions. The suits are Cups, Wands (which are actual wands, not tree branches), Pentacles (which are actual pentacles, not discs or coins) and Swords. Each card is named and the Major Arcana is also numbered. The meaning of each Minor Arcana card is distilled into one key word that is printed above the picture, while its individual designation is printed below. The cards are translated simultaneously in English, French, Italian, German and Spanish.

The cards are standard playing-card size (2-3/8 x 3-7/8 inches) and are very easy to handle. The pictures are contained within a center rectangle with a white border, which is larger at the top and bottom to accommodate their descriptions. With so much written material, I would prefer that either the cards were larger or they were printed in one language only so as to have more room for the picture. The reversible back design has a black field bordered in white with two red tangential circles forming the sign of infinity and a white triangle within each circle, one upward pointing and one downward pointing touching at the tips, which when combined form the hexagram known as the Sri Yantra or Solomons Seal (a trick you can see by holding the card horizontally in front of you and crossing your eyes).

Barbara Walker's interpretations are rooted in Tantric philosophy; and the pictures illustrate religious ideas from India, through the Middle East and into Europe, as she believes the Tarot cards themselves evolved. There are no images representing African (other than Egyptian), East Asian, Pan-Pacific or Native American cultures. Ms. Walker does not incorporate orthodox Christian beliefs. She explains in her book how the church co-opted many pagan traditions into its dogma (intentionally or otherwise) and some cards may seem to illustrate these beliefs, but they are in fact older pagan iconography.

Anyone familiar with the Rider-Waite or Marseille Tarot will recognize the symbolism easily, although there are a few exceptions and some subtle changes. Instead of a disembodied hand holding the symbol for the Aces, a full-fledged representation of the Goddess is clearly illustrated. Ms. Walker maintains that the Major Arcana are symbols of initiation into the mysteries of the pre-Christian religions, where the Triple Goddess reigned supreme and reincarnation was accepted. To that end, she removes the more obvious interpretations based on patriarchal bias and restores the original matrifocal intent. The card of the Lovers depicts a young couple being married by a mature priestess or wise-woman. [It was a general rule in the East that shamans, priests, sages, and other holy men required a spiritual/sexual marriage before they could come into full possession of their powers. By a centuries-old tradition, the ceremony of marriage was handled by priestesses of the Goddess who governed every phase of human love.] She reasserts the older tradition of placing the card of Justice following the Chariot [Though men might feel themselves to be gods, the Goddess exacted compensation for her gifts. After the transitory glory of the Chariot ride, Justice, balancing pleasures against pains in her scale, demanded payment of the karmic debt.] and Strength following the Wheel of Fortune to begin the presentation of the deeper mysteries [The power of mana, or magical efficacy, belonged only to the Eternal Feminine. Many versions of the Goddess were associated with the idea of strength and with the symbol of a lion, especially during her Destroyer phase. Such a dread image would have to be faced by one determined to plumb the secrets of the underworld.].

The most obvious departure from other decks is the depiction of the court cards. They are Kings, Queens, Princes and Princesses, and they are each given the specific name and image of a God or Goddess that represent the characteristics of that card. The King and Queen and the Prince and Princess are paired according to specific mythologies. For example, the King and Queen of Swords are Indias Yama [godlike authority, powerful judge, discipline and order] and Kali [fatal decisions, swift action, deprivation or widowhood], the Prince and Princess of Cups are Britains Galahad [gallantry, courtesy, capacity for self-sacrifice] and Elaine [mystical insight, hidden knowledge, poetic inspiration]. This is a great help to me in interpreting the court cards, which can be very similar in their traditional representations.

One card that I am drawn to particularly is the Eight of Cups, designated as Loss. It is highly evocative. The Arcadian goat god, Pan, sits at the base of a weeping willow with his head in his hand. The tree is his lover, the goddess Helice, a shape-shifting nymph who personified the inspiration of the Muses. Eight cups are overturned and spill their contents into a pond where water lilies grow (a hint at the Tantric origins of the cards). The background suggests a setting sun. Christian authorities used Pan as the model for their devil, and Helice became immobilized permanently in the revision of her myth. The tears of the deposed god provide a poetic metaphor for loss of true inspiration. Ms. Walker states, The card bore connotations of abandonment, severing links with the past, rejection of the Muses gifts, desertion of old loyalties, and similar changes of viewpoint accompanied by feelings of sadness, melancholy, or helplessness. The eight also could imply unavoidable regret at leaving behind something valuable, during a passage into a new phase of life. For me, this card seems to sum up the state of the world today, as the patriarchal ruling class has turned its back on the life-sustaining values of the past, strips the Earth of her natural resources for personal gain and suppresses any critical or artistic thinking not in line with its precepts.

This may not be the deck for an inexperienced novice; but, even with a basic understanding, Barbara Walker's Tarot will illuminate and enlighten without the extraneous material that could be overwhelming. However, the depth of meaning and detail is sure to inspire the experienced reader as well. It has never failed to bring my readings into clear focus.

There is a wealth of information contained in Barbara Walker's book, which I found invaluable in my study of the Tarot. If you are unfamiliar with Indo-European mythologies, or are limited to a single system only, I cannot recommend this book to you strongly enough. It is truly a remarkable achievement.

Theme: Multicultural
Category: Available Tarot Decks, Tarot Decks from the 1980s
Creator: I Ching of the Goddess by Barbara Walker