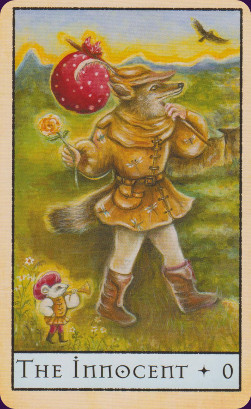 The Bohemian Animal Tarot has 80 charming cards with the Rider-Waite-based tarot archetypes represented by part-human, part-animal characters. This is the first tarot deck from oracle author, Scott Alexander King. 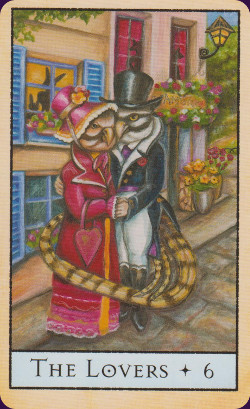 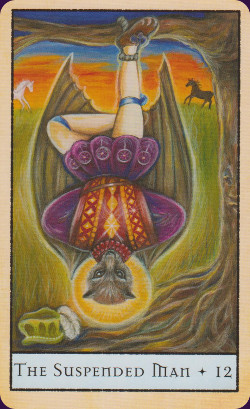 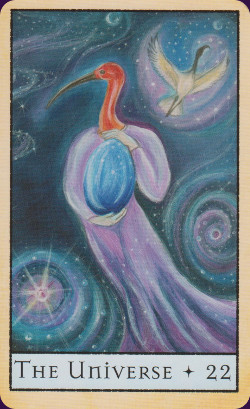 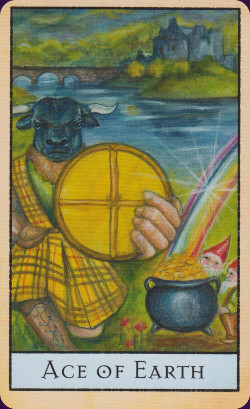 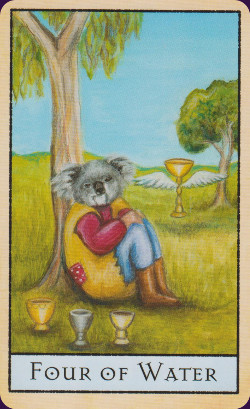 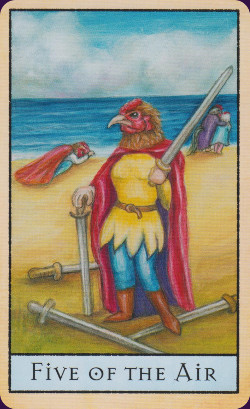 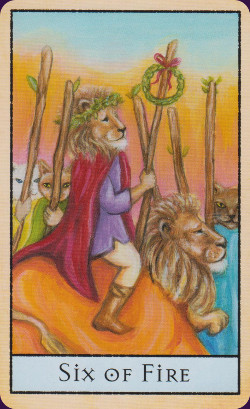 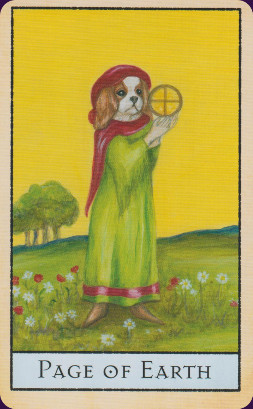 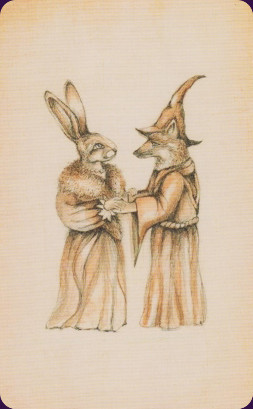 The Bohemian Animal Tarot is a curious and very pretty deck, with both the innocence and occasional artless brutality of a Grimm fairytale.

The hybrid creatures depicted in this deck have human bodies and animal heads – somewhat reminiscent of Egyptian gods. The settings for this deck are quasi–historical, moving from the Tudor and Elizabethan era through Baroque, Victorian, French and even a little romanticised Romany Gypsy imagery. While there are no recurring characters and no easily identifiable storylines, the essence of this deck is pure Rider Waite Smith magic. The Major Arcana follows the traditional story of the Fool's Journey – renamed here as the Innocent's Quest. The Minor Arcana plays out all the familiar scenes we know from the Rider-Waite-Smith standard. The animals in this deck are both anthropomorphic, embodying human qualities, and totemic, bringing powerful spiritual significance to the meaning of each card.

The Major Arcana has many renamed cards but follows the essence and intention of the Rider Waite Smith deck; The Fool becomes The Innocent; The Magician – The High Priest; The Empress – The Goddess; The Emperor – The God; The Hierophant – The Shaman; The Chariot – The Carousel; Strength – The Warrior; The Hermit – The Solitary; Justice – Consequences; Temperance – Moderation; The Devil – The Lower World; The Tower – The Rook; The World – Mother Earth; Judgement – The Universe.

There is also a wonderful 23rd card titled The Afterlife which embodies the qualities of Karma, continuation, rebirth, and attainment.

The Minor Arcana suits are named Air, Fire, Water, and Earth, but the pictures on the cards depict traditional RWS scenes utilising Swords, Wands, Cups, and Pentacles. The major departure from traditional tarot symbolism is the reversal of two elements - Earth is now South, and Fire is North in the Bohemian Animal Tarot. This reflects alignments used in the southern hemisphere where this deck originates. For the sake of clarity: in the northern hemisphere if one travels north you arrive at the Arctic; hence the season of Winter and element of Earth are assigned to the North. If you travel north from the southern hemisphere you arrive at the fiery hot equator so the season of Summer and element of Fire is assigned to the North. If you travel south when below the equator, you arrive in the Antarctic, so the season of Winter, element of Earth, is assigned to South. Alignments for East and West remain the same as in the northern hemisphere. Confusing?

This 79 card deck is made of excellent card-stock, sturdy, flexible, high gloss, with gleaming golden edges. The cards measure 80 x 130 mm, a little larger than regular tarot cards, but still easy to handle. The cards will need to be separated one by one as the gilding tends to stick some together; but they shuffle well without being too slippery. The cards have a cream-coloured border around each picture, with the title and number in a box below the image.

The print is clear. The colours are a quite delicate and soft-hued with occasional bright highlights – which suits the fairytale atmosphere of the cards. The artwork appears to be mixed medium, perhaps paint, pastels, and/or pencil which contributes to the retro children's book look of the illustrations. The print on the back, a Fox wizard holding hands with a fine lady Hare, is not reversible.

The little white book, which is actually a sizeable guide book, is wonderful. At 238 pages it is brimming with information. The first 25 pages gives the reader a broad overview of the tarot through the 'Introduction'. It goes on with information about 'The Directions' and their correspondences for both Major and Minor Arcana; and a quick rundown of the classic three card draw and Celtic Cross for reading the cards. The remainder of the book is dedicated to explaining the Arcanum.

Each card gets at least two pages of relevant information, sometimes more. The Major Arcana cards have details about 'The Animal Archetype' which covers the actual and totemic qualities that (the animals depicted) contribute to the essence of the card. The card 'Descriptions' are extensive, detailing not only the plentiful symbols, but the actions and intentions of the characters in the cards. The Major Arcana have an ongoing saga of the Innocent's Quest… As The Innocent (The Fool) embarks on an adventure of self-discovery through meeting guides and surmounting challenges embodied in each card.

There is a quick line of 'Keywords', which is followed by the 'Divinatory Meanings' which are exceptionally detailed, and outline many possible scenarios. The meanings assigned to the cards do not deviate from traditional standards but do offer a very broad scope for interpretation.

The Minor Arcana 'Description' includes a paragraph about the numerological significance of the card. The Court Cards have an overview of the human and abstract ideas that they represent. The 'Divinatory Meanings' for the Court Cards is really vast, and some of the most incredibly detailed information I have ever come across in a guide book - which is magnificent, considering how difficult Courts can be to interpret. This is a tarot book that can stand on its own given the breadth and quality of information it imparts.

The cards and book come packaged in a beautifully presented solid cardboard box. The lid is held shut with magnetic fasteners and folds back to reveal the guidebook sitting atop the deck of cards.

This deck really is very beautiful. If you're an animal lover you will want to add the Bohemian Animal Tarot to your collection. If you are looking for a deck that has the rare atmosphere of a fairytale, or the innocent vibe of children's stories then you don't want to miss out on this. And dare I say it, if you are looking for a deck (which is closely aligned with the Rider-Waite deck), for a young person or child, then the Bohemian Animal Tarot is just about perfect.

This is a visually simple deck of cards. The quality of the cards and the professional gold edging and quality card stock gives them an expensive feel. They are physically, visually and spiritually pleasing to work with.

The writer and illustrator have collaborated previously to produce the Oracle of the Innocent Heart. This continued partnership has seen another beautiful tarot deck be created. The cards are made up of animals in mainly traditional Rider Waite settings. Many of the cards are renamed from traditional decks in both the Minor and Major Arcana’s. The Minor Arcana have been changed to Air, Earth, Fire and Water but they easily transfer back to Swords, Cups, Wands and Pentacles.

They are very user friendly to the novice Tarot Reader but also have many layers of symbology for the more experienced reader in their colour, use of shapes and the specific symbology of the animals on the individual cards. The Major Arcana have also been renamed in many instances but the visual pictures make it an easy deck to refer back to traditional meanings. Examples of the renaming are The Innocent is The Fool and Moderation is Temperance.

Visually these cards are supposed to be inspired by Tudor, Elizabethan and Gypsy styles. They have attempted to combine bits of many styles, Baroque, Victorian and Gypsy influences which may lead some people to think that too many styles have been considered whilst other users may like the symbology of combining many styles.

The animal symbolism very clearly shows messages that people can interpret the big questions such as understanding their journey, if they are loved and their place in the world or the smaller day to day questions that occur in peoples lives about relationships, careers, health and so on. The animal symbolism can be read as part of a complex spread or as a stand-alone card, which still has a great depth of meaning. Scott’s career as an Animal Spirit Mystic/Medium combined with his original teachers training make his animal symbology the most effective part of the deck for gaining insights and answers. The animal information is extremely well detailed and researched.

The companion book is extremely well set out and easy to read. It gives the reader a clear insight to the animal’s symbolism and it has a huge amount of information about animal meanings based on traditional meanings and Scott’s extensive knowledge of animals.

Overall the deck would be popular with beginners or people specifically looking for animal symbology or lovers of animals.