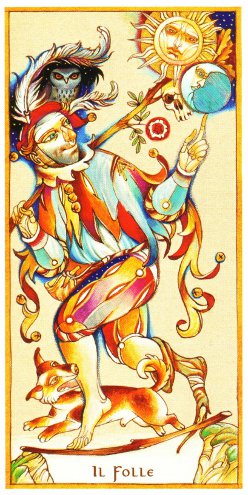 The Daniloff Tarot is deck of original and evocative illustrations by Alexander Daniloff. It's a standard 78-card deck based on the Rider-Waite, but with two variants of Strength and Justice and a 'carte blanche'. Self-published in a limited edition by the artist.


Card Images from the Daniloff Tarot 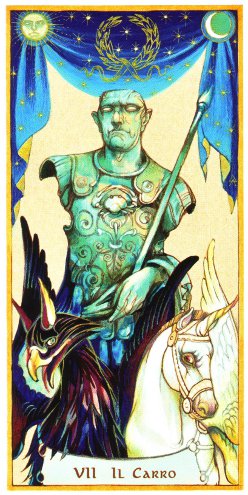 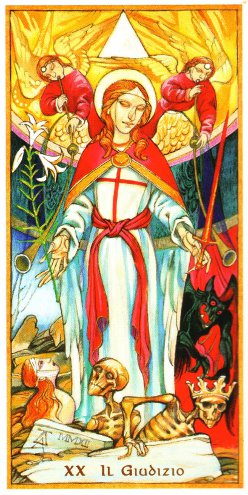 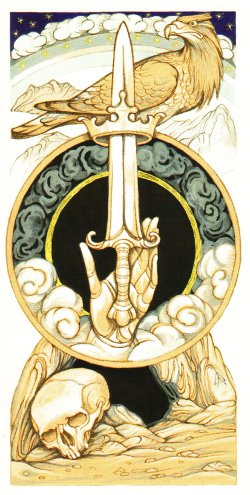 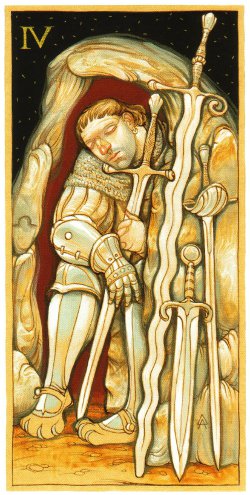 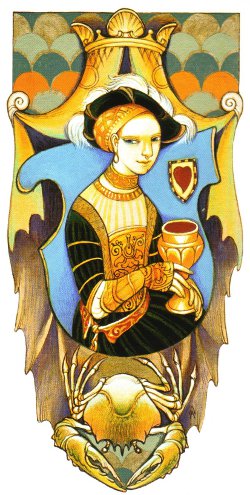 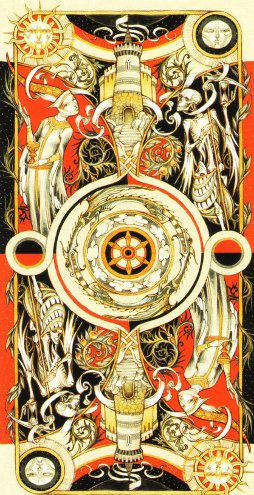 This is a self-published collector’s deck and you shouldn’t pass it up if you are a fan of antiquated Tarot iconography. There are many intriguing surprises in this deck.

At first blush you imagine you’re holding an ancient deck or at least a redone old deck but you soon notice the style is distinctly different from the methods used in antiquity. There are more shapes that are triangular and square, the colours more vibrant and well the imagery…? Dramatic and expressive are two words that come to mind as I contemplate the Death and Devil cards especially.

Alexander has given us choices too! You get to choose whether to have a Strength card as a number 8 or 11 and the same with Justice (in other words he’s done two cards of each). This has been done by a few other Tarotists in the past but not often. I like that opportunity to choose although I continue to grapple with which one I prefer on both counts!

As with every deck we have our favourites. Mine are the Sun, the 7 Wands and the Death card. But to be fair I have many favourites in this deck. The characterization is extraordinary. The expressions on the characters are arresting and memorable and the way their body is arranged is demonstrative. The characters depicted speak volumes. Alexander is an artist of the human form and this is so helpful for understanding the energy and message of the card. Some Tarot artists forget to utilize this tool and leave expressions on the characters rather banal or the same card to card.

The card stock is strong, a good size and has a non-glossy varnish furthering the feel of a deck printed in days long past. The back of the cards is an intricate graphic depicting a collage of imagery taken from the cards. You could spend some serious time contemplating the back of these cards!

This deck however I could only recommend to more advanced Tarotists. You do need to have prior and thorough knowledge of the Waite deck to know what card you are looking at. Many of the pips are not identified at all and the Majors are in Italian (with a number). When this deck arrives I would recommend keeping it in the order it is packaged to give yourself an opportunity to learn the deck. He has kindly ordered the cards so that Aces, Twos, Threes etc. are all together. If you shuffle your deck immediately you’ll definitely have a challenge determining which card is which!

Overall I’m delighted with this deck. It’s Tarot at its delicious best.

This deck is perhaps my favorite release from 2012 in the world of the tarot. I first heard of it when my boyfriend found it circulating around Tumblr. He resonated with the death card and asked me to take a look at them. It was an instant reblog. A little while later I learned that it was an out of print Majors only deck, but that a 78 card deck was in process of completion. Every now and then I would go back to admire the images for their artistic quality. They seemed so fun and so appropriate at the same time. Finding the out of print version was impossible, not even Ebay turned up any listings. I made peace with the fact that all the decks must have gone to collectors who prized them for the jewel they were, and that they would not pass them on easily.

This tarot deck is an original tarot deck by the artist and illustrator Alexander Daniloff. First edition, signed and numbered 450 copies. It has three additional cards: carte blanche and two variants of Strength and Justice. This makes it a very versatile deck because you can choose which school of tarot you prefer. More tarot decks should follow this, it feels like a considerate acknowledgement to the people that will be using it. For those who don’t know what to do with the extra cards, they could put them to use as book marks or pin them up on an inspiration board. I keep the extra cards in the box, but am likely to put them in my tarot diary as page markers later on. They are too nice not to use!

The paper stock is excellent; one that requires careful handling if you want the deck to last. It would be a shame for the corners to get dinged up, but that’s a property of paper that cannot be avoided. The colors stand out with vivid reds and blues. It is an absolute delight to shuffle them and run your fingers over the pseudo-waxy feel of this paper. The stock is sturdy enough to be durable, but watch the corners and the edges if you want to get the most out of this deck. The cards are also a larger size than usual, which really favors the beautiful artwork even if you need to take a little extra precaution in shuffling. The only down side or bittersweet fact is that the deck is so beautiful that I want to shuffle it all day, which won’t be good for its pristine preservation. It hurts me to think about those sharp corners bent and dinged! However, this deck was made to be used and loved until it falls to pieces or until the illustrations fade out from excessive shuffling. It achieved its purpose — I can’t let it go!

The carte blanche is a new concept to me, but not a new concept to the rest of the tarot world. It is perhaps my favorite card to interpret because I have next to no experience with it. It depicts a white curtain with no translucence. The interpretation is left to the discretion of the reader. The first time that it showed up in a reading was in a Celtic Cross, in the very center of the situation. I took it as a sign that I needed to focus on the situation or pay extra attention to the details.

The Daniloff Tarot has a medieval storybook feel to it along with vibrant colors and quirky stylization. It retains its traditional feel of a tarot deck with refreshed images. The Major Arcana is absolutely stunning with the layers of symbolism etched upon them. The symbols are traditional, but the cards are so rich in detail that they convey the feeling with no mistake. The figures in this deck are pretty quiet, barely anybody is smiling. This quality makes the deck serious and asks the reader to be serious as well. This deck speaks to me in whispers and asks for careful contemplation. It is very different from other tarot decks coming out this year, which have a more contemporary setting or theme. The most appealing aspect of this deck is its stunning artwork followed by its regard for tradition.

Lastly, the backs of this deck are fully reversible. You won't have a clue about whether or not they are reversed until you turn them over. Usually I like a subtle hint to give me an idea of whether or not the card is upright, but these are really beautiful. You can see a rendition of a woman, a tower, death, the moon, and the sun amongst flourished elements and frames. It's lovely! This deck would go best over a black spread cloth with no ornaments save for the occasional emblem or whimsical motif to make the cards really stand out.

INTERVIEW WITH THE DANILOFF TAROT:

What is your most important characteristic?

The Hermit. This deck was conceived under a period of deep study and contemplation. Nothing is left to chance but everything is possible. There had been a lot of careful attention and scrutiny of detail to ensure the visual and physical quality of this deck. It comes after a journey of tests and self-exploration, possessing a level of traditional nourishment for the soul.

What are your strengths as a tarot deck?

Eight of Coins. There was a lot of work put into the durability and intellectual insurance of this deck. It was made to stand the test of time in the community and in your hands. From my intuitive understanding of this card, it may become a staple for the collector that decides to use it. This is a work of art that is meant to be seen by the world and admired by those who feel drawn to it.

What are your limits?

Four of Pentacles. From the personal story of the deck, it is saying that it is a limited paradise. The run was a limited edition of 450 and will get as much exposure as the clients give it. Birthed in a place of classic origin, distributed personally and promoted by those who purchase it. It would need the aid of a big company to really get it across to an exponentially larger community. With what they had available at the time, they were able to make something big.

What are you here to teach me?

Ace of Coins. The seed is planted, the deck is here. It's time to really get to know it and to tap into the world that it presents to better understand how to use it. It will provide growth if harvested, with which the rest of the town can benefit from. It starts with the interest and the effort to put plans into being.

How can I best learn to collaborate with you?

King of Cups. Have control over your emotions and understand the circumstances when you sit down to initiate a reading. Focus on the divine connections alluded to in this deck: religion, life, death, secular life, power, dark, light, and other connections that can be accessed through psychic intuition.

What is the potential outcome of our working relationship?

The Emperor. The establishment of something solid. The Emperor is a rigid man of tradition, he upholds them as his pedestal for authority. He rules the kingdom with strength and wisdom passed onto him from years of experience.

Which card do you want to show off?

The Ace of Cups. Love, joy and happiness. The ship and the fish indicate new ventures that bring with them new scenarios in the emotional aspect of life. Fish stir in the waters of the psyche and of emotion, ultimately the soul. It will teach us how to react to the currents of feelings, whether overwhelming or joyous. It is a sign of luck in the journey, reinforced by the angel showering us with its blessing as it flies overhead.

How do you see me?

The Moon. My signifier! Psychic intuition that beams down from a divine source as you emerge from the waters of ignorance. You are undergoing a spiritual venture of enlightenment, embracing the shadows to appreciate the light. There are illusion, madness and dreams present in this card, and it is up to you to test the towers of darkness and light. Find a stable ground and go exploring!

How do you see yourself?

Two of Cups. The potential lover that brings a compliment of new views and experiences. What makes this effective is the mix of opposites to bring together something new. The potential relationship is one of direct opposites in harmony. This can be an encouragement to integrate different parts of the self that could be at war or disagreement.

I absolutely love this tarot deck and recommend you purchase yours from Alexander Daniloff before the remaining copies are sold. You won't regret the investment!