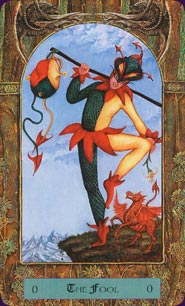 The Dragon Tarot from Nigel Suckling is an attractive 78-card deck that blends dragonology and the European Tarot tradition. Dragons feature on the majors, aces and courts, but the numbered cards are essentially pip cards with a landscape background.


Card Images from the Dragon Tarot 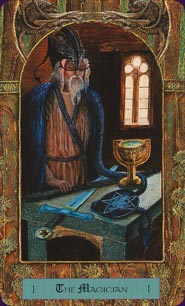 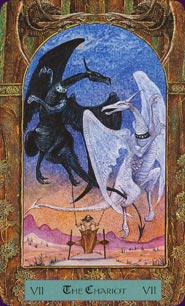 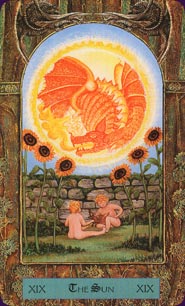 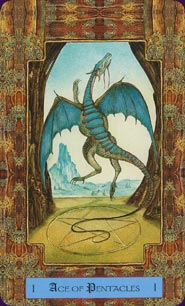 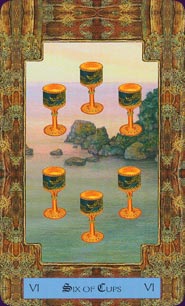 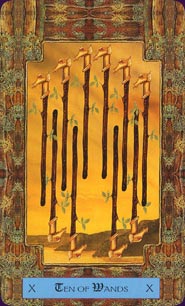 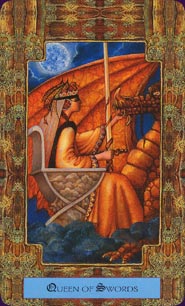 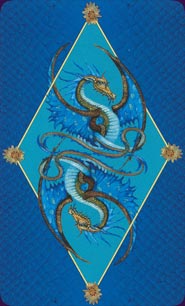 “Behind the unfriendly tales in which the dragon serves largely as a test of valour for passing knights-errant lies an esoteric tradition of the beast embodying forces of nature that we barely understand. Though occasionally hostile, as when an Earth Dragon stirs and our cities crumble, or when Water Dragons release torrents from the sky, river or ocean there is no personal malice. Dragons simply operate by different laws that do not automatically have human interests at their heart. Understanding and bending to their laws is one path to wisdom.”

The Dragon Tarot, blending Tarot and dragonology, is the first deck from English author Nigel Suckling. Not to be confused with the other Dragon Tarot by Pracownik from US Games, or the Dragons Tarot by Baraldi and published by Lo Scarabeo, this deck has been attractively illustrated by Roger and Linda Garland.

The dragons in this deck represent “unconscious forces trying to break through into consciousness and the real world”. In the major arcana, dragons and humans generally co-exist to create a themed version of traditional tarot imagery. There is a small dragon instead of a dog in the Fool; the Magician wears a dragon head-dress and has the emblem of the creature on all his tools; tiny baby dragons hatch at the feet of the Empress and are carved into the arms of her throne; the Hanged Man is dangled from the tongue of a dragon; and Death rides a grey dragon. The Star and the Moon are the only cards with only dragons: two dragons bay at the moon, and there is a blue dragon instead of a naked woman pouring water in the Star.

In the minor arcana, Cups are associated with water dragons, Swords with air dragons that govern weather, Wands with the fire dragons, drakes and salamanders, and Pentacles are linked with the earth dragons, most often seen as guardians of hidden treasures. In imagery, they were not quite what I expected – they are not fully illustrated in the Rider-Waite sense and don’t feature dragons in the same way as the majors. Instead, the minors have the number of suit emblems arranged in different patterns, placed over a landscape background that changes significantly between suits and subtly between cards. Cups cards show a sunset sky over water, with land sometimes visible. Wands have an orange clouded key and large mountains in some cards.

In imagery, the deck seems to follow European deck traditions most closely. Justice and Strength are numbered VIII and XI respectively, and the minor arcana look more like pip cards with arranged suit emblems rather than complete scenes, though the given card meanings in the book are similar to Rider-Waite interpretations.

The cardstock used in a little flimsy – very thin and flexible. The cards have rounded corners and a small, slightly rough tab on each side of, where I presume it was detached from the sheet after printing. The faces are surrounded by thick borders that appear as though they’re made of very old, carved, mossy wood, while the backs are blue in colour. They have a pattern like blue dragon scales, and a diamond design in the centre with a mirrored dragon.

The deck and square companion book are packaged in a light, heavily-laminated cardboard kit, with a plastic insert that holds the cards and book precisely. The book has glossy white printed pages and is 64-pages in length. It seems like it could have been much longer, as I was a little confused by the somewhat random information provided about dragons at the front of the book. I discovered later that the author’s website mentions that this was due to space constraints and has both a much fuller introduction to the concept for the deck, and a more detailed explanation of Tarot’s origins than is provided in the book as well.

The section of meanings for the major arcana has a large image of the card upright and small reversed image, four or five keywords that sum up the card, an outline of the card in general and the symbols used in this deck, then an upright and reversed meaning. The minor meanings have just the upright and reversed interpretations and a small, upright card image. Both sets of meanings are of the divinatory or fortune-telling kind, focusing on practical advice and help with decision-making.

I was initially little disappointed by the numbered suit cards, but the major arcana, ace card and court cards of the Dragon Tarot are attractive and detailed cards of dragon fantasy. Overall, the deck worked for me in readings as a straight-forward divinatory deck (in conjunction with the companion book, as I’m not practiced with pip cards). I’d probably recommend it most for dragon fans who also prefer to use European-style decks.