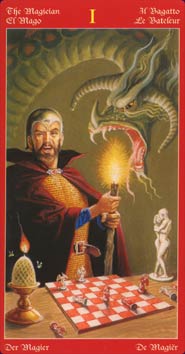 The Dragons Tarot features mythical dragons, earthly dinosaurs and feathered serpents from all cultures, myths and eras in its very colourful and useable 78 cards. Not to be confused with the other Dragon Tarot.


Card Images from the Dragons Tarot 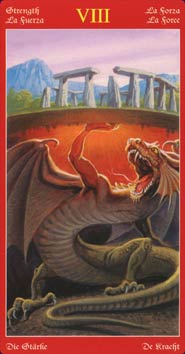 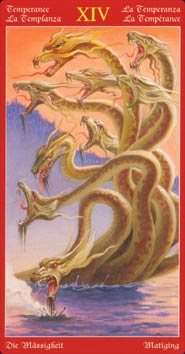 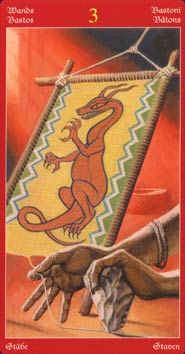 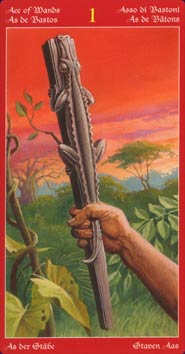 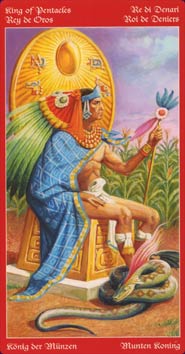 Dragons are common in legend the world over. Many cultures, separated by distance and time, have stories, art, or myths of fire-breathing lizards or giant reptiles often representing nature, chaos or the four elements. In modern times we have the contemporary version – the fantasy dragon of science-fiction and fantasy fiction. The Dragons Tarot honours all of them in its 78 multicultural, and very colourful, fully-illustrated Tarot cards.

The deck features some very diverse dragons from small goanna-like reptiles and feathered snake-like creatures to magnificent winged dragons. The dragons differ in cultural background, appearance, colour and activity and are companions, competition, prey, mortal enemies, guardians, steeds, and even constellations to humans. Dragons are the subject of art, heraldry, tapestries, sculpture, architecture and rock paintings, all rendered on the cards in colours from all over the palette and surrounded by a deep red border. (The cards’ artistic style may seem familiar – the artist is Severino Baraldi, who has worked on several fantasy or historically-based decks from Lo Scarabeo, including the Tarot of the Journey to the Orient, Ramses: Tarot of Eternity and the Tarot of the Druids.)

The major arcana cards are associated with well known dragons or dragon-related archetypes, from the Hydra in Temperance, Uther Pendragon in the Hanged Man, St George in Death and the Ouroboros in the World. The minor arcana feature scenes built around the dragons associated with each culture, each an imaginative interpretation of Tarot imagery with the suit elements subtly incorporated into the dragon’s scene. The suit of Swords features European dragons and people; Chalices have Eastern dragons and themes; Wands are linked with the earthly dragons very similar to dinosaurs and Babylon, Egypt and Africa; and Pentacles depict the Feathered Serpents of the Americas. Court cards have also been altered from the norm - the Page has been replaced by Infanta – a baby or young toddler.

The cards in the Dragons Tarot that caught my attention were the Aces, particularly the Ace of Chalices: a glowing, dragon-carved chalice held aloft by a richly robed woman. Judgement is also interesting – a trumpeting angel oversees fiery meteorites slamming into the earth, as triceratops, stegosaurus, tyrannosaurus rex, and other dinosaurs run in confusion – as is the Devil. The black dragon dominating the scene has the sun in chains, not the human in front of him.

In the booklet, there are a relatively decent explanation for each major (for a deck from Lo Scarabeo), plus a few common keywords. The minors receive one sentence describing the scene and a phrase or word to sum it up.

I – Magician – (Merlin) Fertilization. Magician par excellence. Merlin is the male who uses the dragon’s spiritual energy for his own benefit without, however, being aware of the risks he is taking. Masks – Diplomacy – Trade - Power.

Ace of Wands – A male hand grips a staff with a sculpted four-legged dragon. Debut.

Whereas the Dragon Tarot was illustrations of the modern dragon in fantasy novels and films, and the Celtic Dragon Tarot honoured the British creatures, the Dragons Tarot encompasses dragons from many cultures and civilisations and brings them to life in vivid colours and storybook art. I’d recommend it to dragon fans who some experience with Tarot cards, or for readings with teenagers.

So what do you do if you’ve spent 20 years buying tarot cards – anything you can get your hands on – because an unseen hand has touched you, leaving you with an obsessive interest in understanding what tarot cards are? Well at last, now I’ve a collection of more than 700, the beast has finally outgrown my small flat here in west London and I can either begin posting my opinions on the internet - thus giving me the opportunity to contribute to and challenge the deeply held beliefs of those in the World of Tarot - or keep my silence and go crazy.

Some people believe that’s if you’ve nothing good to say, it’s better to say nothing. Well I believe this too - sometimes. I’ve a choice either to review only the decks I like for Aeclectic Tarot, suppressing my annoyance that the market is flooded with decks that don’t express what is universally agreed to be an alternative vision of what is tarot, or say what I think and not give a damn.

My opinion of what the Tarot ‘should’ be? Although the Grandparents of the Tarot are the Italian and French decks of the 1400’s and beyond, the Mother and Father of today’s decks are the Waite-Smith deck (1910) and Aleister Crowley’s Thoth deck (1945). Therefore, when I speak of the meanings of the cards being expressed ‘traditionally’ (or otherwise), I am referring to the titles as expressed within these decks as agreed by the Golden Dawn – for both major and minor arcana, and expressed pictorially by Waite / Smith and Crowley / Harris.

I’m going to start by reviewing a deck I really like, saying a big Thank You to Lo Scarabeo for keeping my fetish satisfied for the last 20 years. It’s called the Dragons Tarot.

This tarot follows a trend set in the early 1990’s to express various world cultures within each suit. Early examples of this are Tarot of the Ages, the Ancestral Tarot, and the Haindl Tarot. This works particularly well, as the image of the Dragon is known throughout the world – most cultures have expressed a similar imagery and devotional lore in regard to the ‘mythical’ creature (in quotes because I truly believe that the Dragon exists).

The Dragons Tarot expresses the meanings of the minor arcana in particularly original ways – keeping the Golden Dawn’s meanings (unusual for lo scarabeo in the minor arcana – a gripe I will enlarge upon in further reviews!)

The minor’s images pay homage to the Waite / Smith and Crowley / Harris decks, in that they show scenes with people role-playing (W/S) and occasionally insert homage to C/H by showing the Golden Dawn’s astrological correspondences. These correspondences are not always present, however sometimes they are merely a little tricky to find – making the deck more fun!

Within the suit of cups are images from China, (pagodas, lamas, traditional dress). The 69 glyph for the sign Cancer is shown clearly on the 2 of cups, also the planet associated with the card (Venus), which is shown by the protagonist of the card, an artist. I can’t find (maybe it’s not there) the astrological connection on the 3, but although there is no overtly Cancerian image on the 4, the moon is in the sky (Golden Dawn Moon in Cancer). Mars in Scorpio is shown on the 5 as fiery object striking a temple, the 6 and 7 show scorpions.

The suit of wands is represented by images from Africa. The closest to a Dragon in African lore are large lizards. Regarding connections with astrological correspondences, rams are notably absent on the 2, 3 and 4 – however Leo’s lion exists (happily in only one instance) on the 5, 6 and 7. Sagittarius appears on the 8 and 9.

The suit of swords is represented by images related to the Welsh Dragon, most sorrowfully on the 3, (Golden Dawn’s Saturn in Libra), showing an old man (Saturn) holding a pair of scales and looking in awe at a tapestry of the symbolic death of the Old Religion – the Goddess (matriarchy) being killed by St. George. The 4 shows an image that reminds me of the entrance to Powis Castle in Wales – however, rather than the battle between the Dragon and St. George, here the image shows the Dragon peaceably resting on a stone column. It’s hard to see how Aquarius is represented in the 5, 6 and 7 – except perhaps by the deposed King on the 5 (Aquarius’ propensity to revolution), and the moon (in Aquarius) on the 7. Andromeda appears on the 8, and the rams that should have appeared on some of the wands appear on the 9 (they got lost, as rams sometimes do).

The pentacles show images of the South American Mayans and Aztecs, the Dragon existing as Quetzalcoatl, the feathered serpent. It’s not easy to find the astrological correspondences on some of these, however the Sun in Capricorn is shown on the 4 as a golden temple with 4 golden female figures beneath it. The 5 shows one of the saddest images within the deck, a vision a priest has of the arrival of the conquistadors. (The 5, 6 and 7 all show bulls for Taurus). The 8 and 9 show children – Virgo expressed as innocence. The 9 includes the Corn Mother, the Harvest, sometimes used as a symbol for Virgo. The children are the native Mayans, gathered in front of a crucifix, representing the newly imposed religion. The deposed Goddess wraps herself around the cross, reminding the children of her truth.

One minor gripe with the deck is its’ Court cards. All the Queens are completely naked – however the Kings are all elegantly dressed. There appears to be the usual inequality in male / female ratio on the 4 cards also – aside from the Kings and Queens, there are Infants and Knights, most of whom are male.

My favourites amongst the majors? Strength shows the Welsh Dragon as the Goddess, Mother Nature, holding up the earth under Stonehenge, a reminder that She is with us at all times, even though She may appear to be invisible… and Justice, where the Goddess gets her own back on the Patriarchs by killing Beowulf – unfortunately George is riding at full steam behind him… and Judgement, which shows the ‘end of an age’, represented by the meteor crashing into the Earth, ending the reign of the Dinosaurs, the closest relation to the Dragon.

For me personally, the Dragon has become a reminder of who we as human beings really are. If we can believe that the God/dess is a Dragon – ie an animal – what right have we to view ourselves as superior to other beings on this Earth? We are animals just like every other form of life which can see, hear, smell and feel joy, sorrow, fear, frustration and pain. Our domination of Nature seems to have given us the right to inflict violence on other sentient beings via the monsters that are the pharmaceutical industries (their testing of products on animals) and the inherently violent meat industry. For as long as we continue to inflict violence on defenceless beings, we can only look forward to our own version of Judgement – but it won’t be a meteor that finishes us off. It will be ourselves.

To end, this is one of the finest decks there are. Buy one, and one for a friend, while stocks lasts! You won’t regret it. And spare a thought for the animals :)