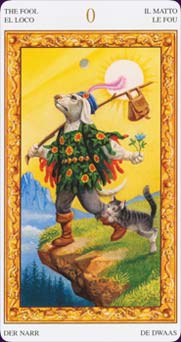 Tarot of the White Cats

The Tarot of the White Cats is very much in the tradition of the Rider-Waite Tarot - except for the blue-eyed, white cats drawn in the cards, instead of people. The symbolism is standard and non-threatening enough for use for the Tarot beginner.


Card Images from the Tarot of the White Cats 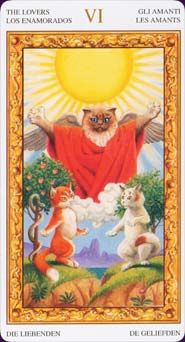 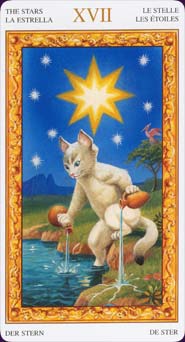 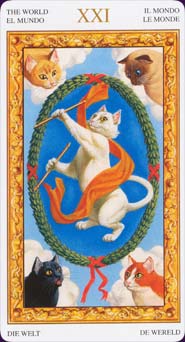 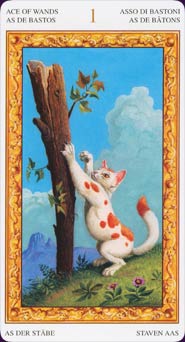 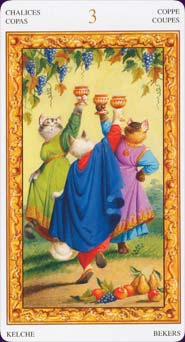 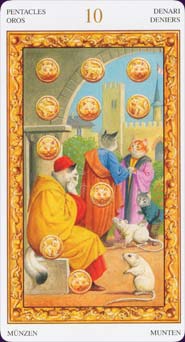 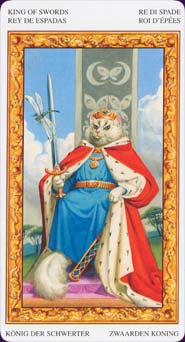 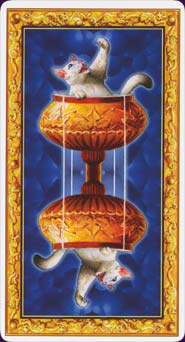 A New Look at a Neutral Reading Deck

I like a neutral deck for my everyday 'carrying' deck. I like to carry a deck with art that is instantly recognizable as tarot, but with a very subtle approach, something that can blend with any environment. Maggie Kneen's Old English Tarot has served that purpose well.

However, there is a new deck that has become my new carrying deck.

Here we see a brilliant approach to Waite/Coleman-Smith style images, executed by Severino Baraldi, creator of 'The Dragons Tarot', 'Tarot of Druids', 'Tarot of the Journey to the Orient', and 'Ramses: Tarot of Eternity'. Baraldi is perhaps best known as an illustrator of books, ranging from history to children's books.

When I looked at the deck, my first thought was Childrens Book Illustrations. Once we allow ourselves to get past the cuteness, one begins to appreciate the powerful treatment of Tarot imagery.

The deck is instantly recognizable as a Waite/Smith-Colman clone, albeit Justice is VIII and Strength is XI. The Courts follow traditional elemental treatment. Looking carefully, it's my opinion that the Majors follow Lévi as opposed to Golden Dawn attributions, and The Fool could be either Aleph or Shin (depending on where you want to place focus). There is a lot of occult symbology, disguised within 'children's illustrations'. There is some heavy stuff here.

There are also a few cards that appear to reflect a wily sense of humor, from the illustrator. The 10 of Swords shows a blanket pierced by nine of ten swords. Gato waves as he leaves. The 10 of Pentacles - I saw what I thought I saw, until I saw it was an optical illusion and it wasn't there at all, but it is. Both cards have been 'opened up' beautifully.

As a reading deck, it's a joy.

And when somebody walks by and says, Harumph, Tarot Cards waste of time and money. You say, but look, they're so cuuuuute they have kitties on them! Oh those are cute do you read them?

"Let’s follow the tracks of the White Cats: Wise and astute masters of living happily, guides in a world of nine lives."

The cards of the Tarot of the White Cats features pale, blue-eyed and brown-eyed felines. They were chosen for their appeal to cat lovers, their magical connotations in some cultures, and because the colour white symbolises “mental clarity, spiritual purity, the passing from death to life, and psychic rebirth”, according to the booklet. These cats inhabit a kind of Disney Renaissance; they wear luxurious robes and dresses and are set on backgrounds illustrated with fairytale castles and landscapes with a slight Italian influence. It is a world of just cats – except for one dog who is, of course, the Fool.

The deck is almost a clone - but not quite - of the Rider-Waite’s images drawn by Pamela Colman-Smith, sharing strong similarity in symbolism, position and colour hue. There are a few deviations from the standard, made in order to make the card’s meaning more obvious. There are kittens added to the Aces, and changes of perspective in cards like the Four of Swords. (And despite the Rider-Waite-Smith similarities, Strength and Justice have been placed back in their historical positions of XI and VIII respectively.)

Also altered are the most frightening aspects of ‘negative’ cards, like the Three & Ten of Swords and the Death card. The Ten of Swords shows nine swords piercing a white cloth on the ground, another sword on the ground, and a white cat dashing off in alarm; the Three of Swords has the traditional image of a heart pierced by three swords, but also pictures a cat sitting crying with its paws to its eyes. Death has a black-robed figured with long scythe, in a stormy background and with a spilled chest of treasure at its feet – there’s no visible sign of a skull or skeleton. The Devil is the most challenging card remaining – the rest are rather cute and inoffensive (as long as you don’t consider cat decks to be offensive in themselves!) and could even be used by children.

The companion booklet from Lo Scarabeo is in the usual five languages, and so there isn’t much space for information in English. The divinatory meanings are short advisory phrases; majors are listed by number. There’s also one spread in the booklet called ‘The Cat’s Eye’ and a sample reading for the six card spread - nice to see in a deck aimed at beginners.

0 – Something, someone, or a sixth sense advises on how to prevent a ruinous downfall. It’s best to listen to that voice.

Chalices – 3. To avoid frustration, delight in success only when you are sure that you have obtained what you wanted.

Wands – Ace. Even old trees can germinate and bear good fruit if treated with care.

Severino Baraldi’s art in his other decks - like the Tarot of the Journey to the Orient and the Dragons Tarot - often reminds me a bit of the art in a kid’s book of fairytales, but it is appropriate and somehow it works in the Tarot of the White Cats. Overall, this is a playful, cute Tarot deck that could be easily used by children, by a beginner looking for something a little more attractive than the Rider-Waite, and by the more experienced Tarot reader as a deck to use for nervous querents.