Tarot of the Druids 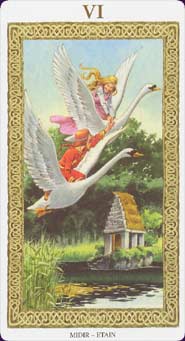 The Tarot of the Druids is inspired by ancient Irish traditions and divinities, and Celtic life and culture. The images are cartoonish and somewhat comical.


Card Images from the Tarot of the Druids 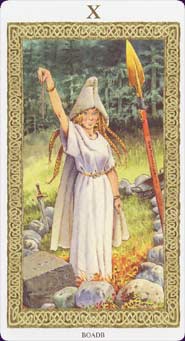 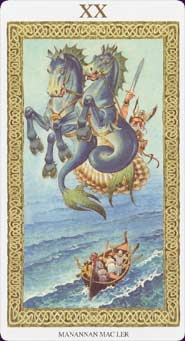 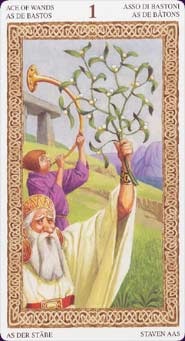 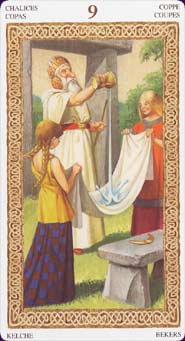 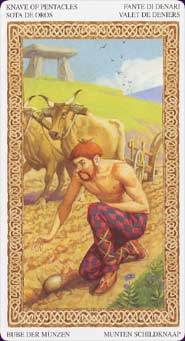 Tarot of the Druids Review by Solandia

The major cards of the Tarot of the Druids are associated with Celtic deities, faeries and characters from mythology, and are non-traditionally titled with only the Gaelic name of the deity on the card. The 22 majors are divided into five cycles relevant to the Celts and their legendary figures: mythological, heroic, historical, Ossianic, and adventurous:


The four suits of the minor arcana cards are also non-standard and are: Chalices, Swords, Aguinum – a talisman – for Pentacles, and Mistletoe for Wands. These cards are images of Celtic life connected with Druidic culture, according to the companion booklet.

Unfortunately, many of these cards - majors and minors - don’t really correspond to traditional Tarot names, symbols, or scenes. Or even the written meanings in the booklet, where some upright meanings seem unrelated and others downright contradictory. Some examples:

The Eight of Chalices shows white-robed and –bearded man contemplating an oak tree with a cup tumbled amidst its roots. The explanation given is “Future wealth, intense emotional life.”

Seven of Pentacles: a women rushes to her child, playing with an aguinam in his crib. The meaning? Equilibrium, shrewd business. O-kay.

The majors suffer from the same problem. The character Conchobar (XI) is supposedly a man in harmony with nature – but he is depicted with sword, shield and spear, striding through a grey and rocky landscape. XVI Aillen mac Midhna, listed as ‘Ability to Seduce’, is a portly fellow holding a harp and cup – and with flaming dragon breath emitting from his nostrils.

In its favour, it is printed on glossy card stock, has a reversible back design, and is a different and more comical perspective on the Celts and Druids. There are also a few nice cards: the Queen of Wands is the most attractive of them all, with a green wood nymph, half woman, half tree, her hands blooming with pink flowers. The King of Wands, King of Chalices and Queen of Chalices are also solid cards, as is the Queen of Pentacles, a well-dressed woman seated next to a roaring hearth.

In the end I wasn’t overly impressed with the artwork or the apparently meaningless changes to traditional tarot scenes, but I did find in readings the deck was more accurate than not (though rather terse and without a great deal of depth). Overall, I wouldn’t recommend the Tarot of the Druids for the beginner, but the deck could be used by the intermediate to advanced reader if the artwork was to their taste.


Tarot of the Druids Review by Kathleen Meadows

What I immediately adored about this deck was its natural, cozy friendliness. The images are predominantly small-town, and rural, middle-ages scenes depicting characters that are rather homely, and therefore quite delightful. The pervasive colour scheme is soft, muted browns, and greens, the characters are typically outfitted in furry, elfin shoes, Viking helmets, and lose-fitting, plainly comfortable clothing. The dwellings are natural, humble cottages. I would describe the imagery as whimsical, and imagine it would appeal especially to younger readers.

For those studying the gods, goddesses and legends of the Druidic mystical tradition, this deck will be fun and helpful. You really have to see Lo Scarabeo’s depiction of Morrigan as the Empress, a voluptuous, Viking-like warrior woman playing the harp, or Brigh as the High Priestess, plump, contemplative, seated outside in a meadow-- to fully appreciate the thought and work that went into the creation of this deck. It is a real find for those who are wary of imagery that is alarmist, dramatic and potentially jarring. Certainly if you read this deck for others, they wont be frightened or put off by the images; in fact, in all likelihood they will giggle appreciatively at the scenes depicted.

For those who think the Tarot is a serious business, the deck may appear a little too storybook-like, resembling the types of illustrations you might find in a children’s fairy tale. But for the new reader these detailed and delightful illustrations will make your interpretive job much easier. The feeling, tone, action indicated, characterization are all plainly laid out for you, acting as great story prompts. This deck is like a down-to-earth friend who makes you laugh, feel warm and welcome. I highly recommend it.


Complete Details of Tarot of the Druids


Similar Decks to Tarot of the Druids

Home > Decks > Tarot of the Druids