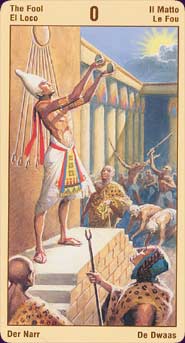 The Ramses: Tarot of Eternity deck is another Ancient Egyptian-themed tarot, with life-like rather than stylised artwork and a real sense of history. Concentrating on the era of th Pharaoh Ramses II, the cards show events in his life as well as more mundane Egypt.


Card Images from the Ramses: Tarot of Eternity 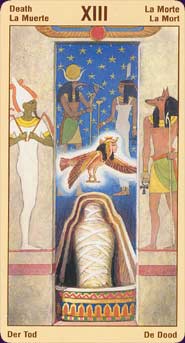 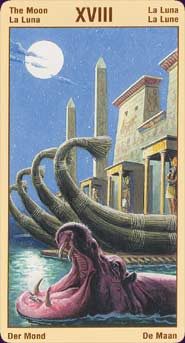 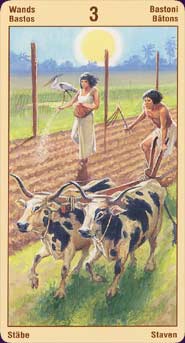 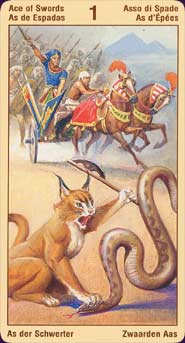 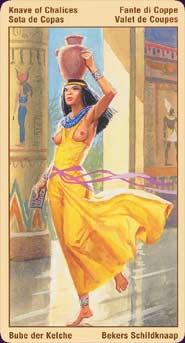 Ramses: Tarot of Eternity is an Ancient Egyptian-inspired tarot, concentrating on a single era, 1304 to 1224 BC, and illustrating the time of the 'living god' - Ramses II. Special attention has been paid to the historical accuracy as well as the aesthetics of these images. The major arcana refer to important people and events in the life of Ramses (except for the Fool which is Akhnaton, and Judgement which featured Moses). The minor arcana cards are also fully illustrated and show details of everyday Egyptian life in the era.

Severino Baldi, the same artist who created the Journey to the Orient Tarot, painted these cards. The art of the Ramses Tarot is of a very similar realistic style, and is noticeably different from decks that mimic in style of ancient Egyptian artwork, like the Egipcios Kier Tarot, the Ibis Tarot and the several other Lo Scarabeo decks created by Silvana Alasia.

There has been some departure from a 'standard' tarot to create the Ramses deck. Tarot symbolism has been almost invisibly blended with details of Ancient Egyptian life. The cards aren't clones of the Rider-Waite or Thoth or Marseilles symbols, but are wholly new images. As such, I found it easier to work with these cards if I put aside memorised standard meanings and used the cards on their own terms, instead of trying to fit them into a pre-existing tarot interpretations.

In the minor arcana, the suit elements are rarely obtrusive, as instead they have worked into the background of human interaction and behaviour. The changes that have been made to fit the cards into an Egyptian mould mean that some of the images don't correspond exactly to familiar archetypes. Most do, but there are some apparently arbitrary changes that stood out, such as the Four of Swords, usually a card of rest and recuperation, shows an ox just about to be skinned and has the meaning of 'Holocaust. Necessary sacrifice. Self-censorship.' The Seven of Pentacles has qualities more often associated with the Six; that of altruism, gift, help given or received, while the Six itself stands for risky or compromising action.

These cards are designed to be used both upright and reversed. The booklet has printed reversal meanings, and the backs of the cards show a mirrored image of the Pharaoh. The front has only standard tarot titles, in six languages. The majors have an Egyptian association but this is only printed in the companion booklet and not on the cards

The absence of traditional or esoteric tarot symbology in the Ramses Tarot limits the usefulness of the deck as a tarot study tool, but this deck should be of interest to Egyptologists and readers who appreciate fully illustrated and real-looking cards.

I’m a big fan of all things Egyptian, and am happy to use non-standard tarot decks for reading and meditation. So, I thought this deck would suit me well. Sadly, I was much mistaken.

This is a typical Lo Scarabeo deck in terms of card stock and LWB in multiple languages. The backs are fully reversible, with an extract from the Emperor card mirrored from the centre line, in grey-brown, with a paler grey-brown border. The fronts of the cards have a warmer light brown border, and the titles are in a rich chocolate brown, with edging in the same colour. The suits, courts, and majors are all fairly standard. However, things are pretty much downhill from there, as far as I’m concerned.

My first gripe – the artwork. The images are done in a reasonably realistic style, with a broad variety of colours, but what bothers me is that there is a distinctly fuzzy edge to the images, and in particular that a lot of the people just look wrong. At first I thought it was that they seemed ugly, but actually I believe it’s that the faces just aren’t clearly drawn. The Queen of Wands, for example, often one of my favourite cards in any deck, looks like a middle-aged drag queen who forgot to shave – and the fat hippo in the background doesn’t help. I’m sure it has some deeper symbolic significance, but unfortunately all the LWB has to say is “Intimacy. A mature woman. Mother. Jealous woman. Fractured love.”

My second gripe – the violence. There are quite a lot of unpleasant, violent images in this deck. For example, the 9 of Swords has what I think is a woman (another drag queen), cutting the heads off a number of prisoners. In the image, she has just sliced the fifth head from a prostrate prisoner, while at least another four kneel in the background, overseen by a man with a big stick. The Ace of Swords shows a battle charge beginning in the background, while a cat wields an axe against a snake in the foreground (OK, I get the Sekhmet versus Apophis reference, but there’s also the ridiculousness of a cat wielding an axe!) The 4 of Swords shows two men butchering an animal, the 5 of Swords has five kneeling, chained, dark-skinned prisoners being overseen by a pale-skinned man. The 10 of Swords shows a battlefield, full of corpses, vultures, and a building in flames, while the Knight of Swords wields a machete-type blade from the back of his chariot in the centre of a battle. The Queen of Swords delicately holds a flower to her nose, while a blade lies dripping blood on a velvet cushion in front of her. Lest you think this violence is merely the province of the Swords cards, the 10 of Wands has a man with a stick pulling back the head of a kneeling man as a woman begs for mercy. The Hanged Man has five chained slaves working in front of a mural of an overseer about to batter/slaughter (we can’t tell if it’s a stick or a sword) five kneeling men begging for mercy. The Chariot is yet another battle scene, with a chariot being driven by a man wielding a bloody blade, while another downs men on foot with a big stick.

Thirdly, these are just the overtly violent images, there are also a lot of obvious slaves. I accept that in this deck the minors “focus on the daily life of the era of the great Pharaoh by proposing a series of illustrations which are as faithful to the historical reality as possible.” Never the less, I find the large number of obvious cases of slaves somewhat distressing, and consider this yet another reason not to read with this deck either for myself, but especially not for others. I live in a very culturally diverse city, and the overt racism of this deck would also not be appreciated – many slaves are dark-skinned, all overseers and nobility are pale-skinned. There is considerable evidence, I believe, that class was not so simple in Ancient Egypt.

My fourth gripe – the Majors. According to the LWB they “refer to fundamental episodes of the very long existence of the ‘living god’... Ramses II.” This proposition might work if the deck came in a boxed set with decent explanations, but “The High Priestess – Tuya. Study. Intuition. Secrecy. Faith. Mystery.” just doesn’t cut it. Coupled with an image of a woman (?) with a boy on her lap and a girl by her side, and some more symbolic murals behind, without the title one could be forgiven for thinking the picture was of the Empress. I don’t much like nine of the Majors – that’s nearly half of them! I’ve already discussed the High Priestess, the Chariot, and the Hanged Man. I also dislike: the Fool – a man on a little stage holding up two eggs, I think, with slaves gesticulating and prostrating themselves in the background; the Wheel – a man looking alive, but about to be put in a sarcophagus, and being tended by animal-headed priests (?); Temperance – a man crying by the side of a sarcophagus, with a spirit woman (drag queen) behind him holding up two jars; the Devil – three men placing offerings in front of a needle with an image of Seth on it; the Sun – three boys playing in front of a large statue of Ramses II, while a fourth boy walks away looking unhappy, and the sun breaks through dark clouds.

Finally, there are some other cards which are disturbing, or just rather annoying. For example, the Ace of Wands shows a man with a broken-off branch with blood on it. His face is covered by a mask (?) of a scarab beetle, and there is lightning in the background. The 9 of Chalices shows a man drawing on excessively white paper, and his image of a lion and deer sitting on chairs and playing “Where’s the pea?” seems totally ridiculous, as well as being drawn in a style that is more appropriate to a modern five year old than an adult ancient Egyptian.

There are some cards I like, for example The Stars which shows a man offering a garland of flowers to the river gods before undertaking a journey, while gazing at the stars which will help guide his way, or the 8 of Pentacles which shows women engaged in cooking, milling, weaving, or the 6 of Swords with a tattooed (historically accurate?) ragged person doing what looks to be some sort of divination (though he has cast six multi-coloured sharpened bones, and there’s also a sword stuck in the ground in the middle, which rather confuses the question of suit and number). The King of Pentacles is quite amusing, with a fat, bald guy giving thanks to the gods for his cushion full of money, and the 2 of Chalices is beautiful – a couple embrace by the side of a river, watching the sun rise on the horizon, with ducks playing in the water and a cat sat beside their feet.

Altogether, however, the deck seems to me to be violent, racist, ugly, and hard to read. If you like Egyptian themed items, I’d recommend Clive Barrett’s Ancient Egyptian Tarot, which comes with a well-written book and clear images rich in symbology.