Tarot of the Divine 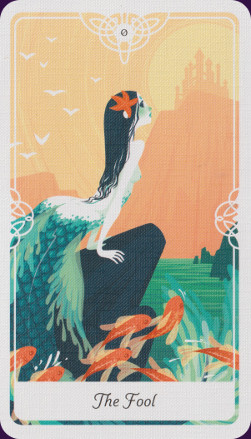 The Tarot of the Divine is inspired by myths and fairy tales from around the world. The artwork is multicultural and with delicate colouring and fine detail, recalling childhood picture books. This is an enchanting and rather sweet tarot, with a high quality feel.


Card Images from the Tarot of the Divine 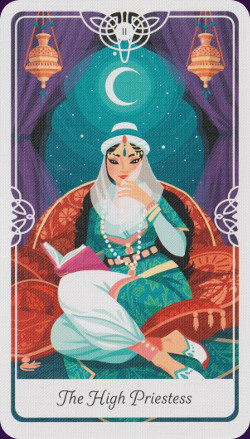 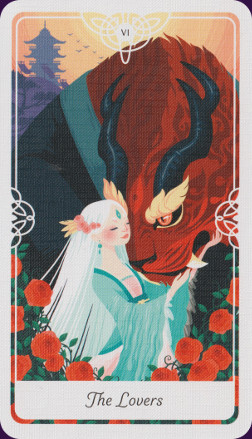 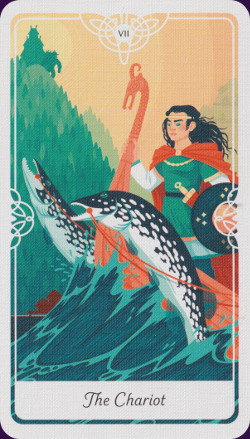 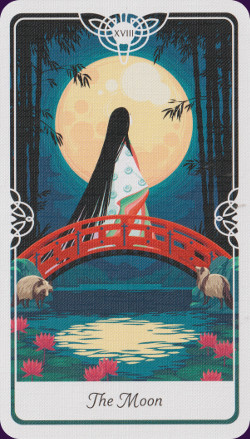 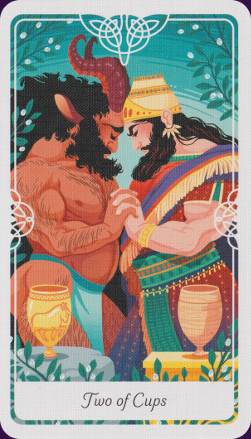 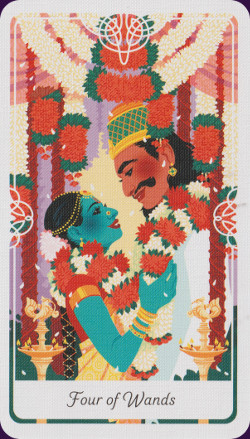 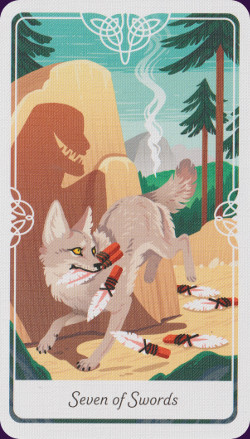 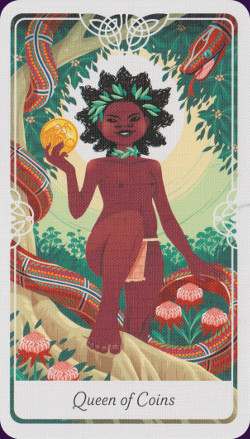 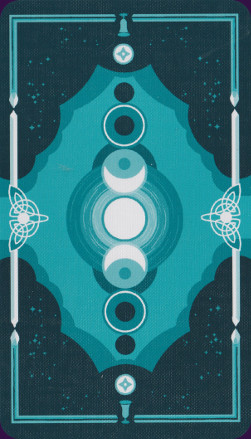 Tarot of the Divine Review by medusawink

The Tarot of the Divine is a 78 card deck that takes myths, folktales, and folklore from around the world as its source of inspiration. These world tales are the foundation of many stories that entertain us today – romances, mysteries, murders, and monsters are all part of the narrative fictions that form up the most popular genres in today’s book markets. The archetypes contained within our fairy tales, myths, and legends are part of our dreams and our arts. Here, in the Tarot of the Divine, the Seeker will find old gods and goddesses alongside familiar heroes and heroines from many world cultures, and every continent.

This is a fully illustrated tarot modelled on the Rider Waite Smith deck. It has 22 Major Arcana and 56 Minor Arcana. The Major Arcana follows AE Waite’s ordering and titles, while the Minor Arcana is divided into four suits – Cups, Coins, Swords, and Wands. Each suit comprised of 14 cards – 10 number cards and 4 Court cards – King, Queen, Knight, and Page. The suits are aligned with four elements and their respective domains of interest – water and spirituality, earth and materialism, air and the intellect, fire and creativity.

The cards measure 70 x 120 mm which is a fairly standard size tarot deck – quite narrow across the body but substantially longer than your average playing card. Card at this size are designed to sit comfortably in one’s hands and be relatively easy to shuffle.

The card stock is excellent – slightly flexible with a linen texture, and as much as is possible, a reasonably glossy finish. The deck is a little weightier than many commercially produced decks, due to the slightly heavier than usual card stock, however this is not a bulky deck to handle. The corners are rounded to prevent the deck from chipping and peeling. The cards don’t clump together, again due to the textured finish, and they are very easy to shuffle and deal.

The print quality is superb – the integrity of the delicate colour schemes is brilliantly reproduced, and the fine lines and detail have been maintained. There are no misprints, no colour bleeds, and no blurring.

Yoshi Yoshitani’s style is distinctly commercial with a strong element of graphics – the images are quite flat, with delicate line work, and surprising, fine detail which gives a poignancy to many of the images. The artwork strongly reminiscent of picture books and cover art, and brings to mind childhood books of fairy stories. While the images do depict mythical beings and familiar fairytale characters, they are presented in such a way as to recall Pamela Coleman Smith’s classic illustrations.

The images are all contained within a white frame that has neo-Celtic knot work at the sides and the top of each image. They also have a narrow white border, and the title of each card is given in elegant black font on a white space at the base of each illustration. The numbers of the Major Arcana cards are black Roman numerals and placed in the knotwork design at the top of the card. The titles of the Minor Arcana are given in full i.e. Four of Swords, King of Cups etc. The print on the back of the cards features a stylised waxing to waning moon design surrounded by an abstract shape in shades of teal on a blue-on-blue starry sky, with a narrow frame surrounding it. The design is symmetrical, and therefore reversible.

The cards and guidebook are packaged as a compact box. The lid of the box folds back, and the cards in a well with the guidebook placed on top of them. A textured ribbon threads beneath the cards to enable easy removal of them from the well. The entire inside of the box is finished in deep, dark teal, while the outside of the box is midnight blue, and printed with images from the deck. The box has the same linen texture is the cards, and all the titles and highlights on the deck are done in gold foil which gives it an elegant finish. This is a fairly solid little box, and can easily be slipped into a shoulder bag or backpack without taking up a large amount of space or adding significant weight. Keep in mind that this is still a cardboard box and as such, if it is subjected to rough handling or significant pressure it is going to tear or break.

The slim paperback guidebook is written by the artist, Yoshi Yoshitani, and all information is given in English only. There is no extended prologue, simply 2 paragraphs which outline the purpose of the deck. This is followed by information about the structure of the tarot. The author also addresses the issue of upright and reversed cards, and this deck does have reversed meanings. Several layouts are included – the one card draw, the three card draw, and a five card spread.

Each card is reproduced in full colour and afforded the same amount of space and information. The corresponding myth or fairy tale is listed directly under the illustration, as well as its country of origin, and a clarification as to whether it is a fairy tale, a myth, saint or deity. Beneath this is a description of the qualities each card embodies and what the fairy tale or myth represents. This is followed by a few keywords for both upright and reversed divinatory meanings – which are very much in line with traditional interpretations.

While it might be tempting to think that because there is a strong fairytale element to this deck that the darker aspects of the tarot have been soft pedalled, this is not so – remember fairytales have always had an broad streak of the sinister and forbidding to them. They were intended as much to be warnings about the dangers of the unknown and mysterious, as they were to entertain. The Tarot of the Divine does not shy away from the ‘hard cards’– the ones that address the hardships and sorrows of life, but it does present them in a format that is not as dread-filled as some tarot decks are wont to do.

The author has also published a book called Beneath The Moon. It features all the illustrations from this tarot, as well as expanded versions of each fairy tale and myth - for those of you who are interested in learning more about the folklore and deities shown in the deck. It should be stressed that this is not an expanded tarot guidebook at all.

This is a lovely, delicately illustrated tarot that is ideal for those of you who are interested in folklore and fairytales. If you have fond reminiscences of children’s picture books and those Little Golden Books with their gorgeous illustrations, then this is a deck that may well appeal to you.

If you are looking for a deck that has a light touch but does not soft-sell the traditional tarot, the Tarot of the Divine is definitely worth checking out. There is enough traditional tarot symbolism in this deck for novices to use it, and those of you who are more familiar with the tarot will have no trouble in reading this deck.

And, if you are looking for a deck that is child friendly, or usable by those who are a little hesitant about the tarot then this deck is highly recommended.


Complete Details of Tarot of the Divine


Similar Decks to Tarot of the Divine

Home > Decks > Tarot of the Divine