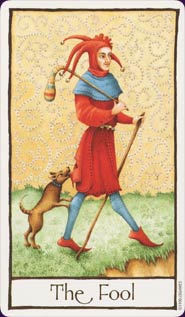 The medieval English style artwork in the Old English Tarot has a has a wonderful soft, old-fashioned look. The majors are quite simple figures, while the minor arcana show the suit elements and a tiny scene at the base of the card. 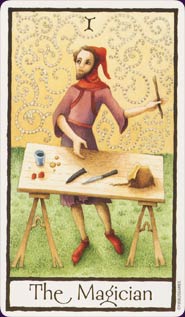 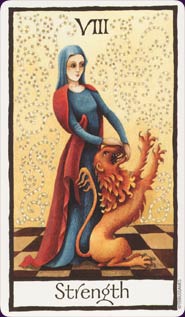 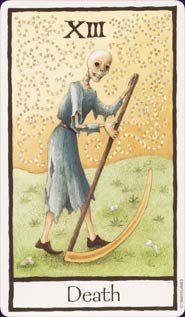 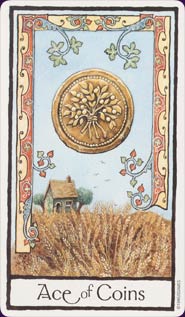 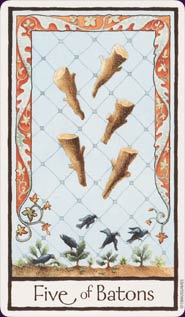 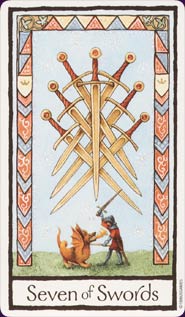 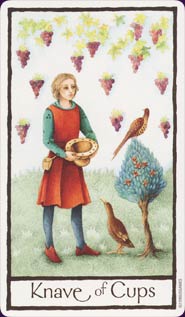 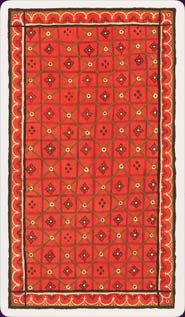 When I first came across this deck in a bookstore I was not really looking for another Tarot Deck. However, being a medieval history buff who is into the art, cooking, music etc. of Merry Olde England, I simply couldn't resist. Old English Tarot? This just had to be the deck for me!

So I brought it home and cracked it open and was immediately delighted by the images of the major arcana. The colors are rich, bold, and deep. The lines are simple, but the pictures are still detailed enough to be pleasing to an art lover. What struck me the most was the background of the major arcana. It is a warm and creamy golden brown with very artistically drawn curlicues twisting through it. What I found particularly interesting was the way in which the artist worked off of some older tarot interpretations. For instance, The Lovers shows a young man trying to choose between two women, often representing virtue and vice, while cupid hovers above them, waiting to let his arrow fly. This is typical of older tarot decks, and shows more of the choice and duality that is inherent in the meaning of the card.

The court cards were also beautiful. The minor arcana are broken up into the familiar swords and cups and also include the somewhat more obscure suits of coins and batons (which stand for pentacles and wands/rods, respectively). One of the things that I loved about the court cards was the way in which the artist themed the color and style of the clothing in each suit. For instance, the King, Queen, Knight, and Knave (Page) of coins are all draped in robes of navy blue whereas the members of the Court of Batons seem to favor lighter blue and crimson robes. I also liked the backgrounds that she used with the court cards, the court members in the suit of cups, for example, were all pictured against a background of draping bowers of purple grapes.

Now on to the pip cards. For me, this was where everything started to fall apart upon first inspection. I was expecting something more along the lines of the Rider-Waite tradition, but to my slight disappointment the pip cards more closely resemble ordinary numbered cards. The three of cups being basically an arrangement of three cups. Each pip card has a small picture running along the bottom of the arrangement of objects. In some cases it is only a tiny person playing a tiny lute and in other cases it can be a scene that depicts people picking fruit in an orchard or harvesting grain. When I began to take a closer look at these pictures I became more pleased. The little pictures are quite nice and hearken to images found on tapestries or in medieval books of hours. The only thing that I didn't like, (aside from the fact that they are generally very small pictures and at times hard to make out) was that while some of the images had something to do with the meanings of the cards, like the ten of swords (ruin, sorrow)pictures a wrecked ship sinking into a stormy sea, others seemed to have no relavance, the three of batons, a card of success, shows three little bunnies popping out of rabbit holes. Cute, but not very helpful. Perhaps least helpful of all are the images on the cups which depict people playing a wide range of medieval musical instruments. Very nice, but again not very helpful.

I have gotten some good readings from this deck, although it is not my main deck. Because of its simplicity, I find it especially helpful for general advice and usually use it for simple one card and three card spreads. All in all this would not be a recommendable deck for beginners since the pictures on the pip cards offer little help with the meanings. It is, however, recommendable for those who have an interest in medieval Europe as well as those who enjoy decks based upon an older tradition.

This is one of my favorite decks. I love most things (well-done things!) that are Medieval themed, and this is definitely well-done. It takes me back to the pastoral days of the mid-1300's so much so that I would be bet if they unearthed an English Tarot deck from that time, it would look very much like this.

Especially considering that the Major's don't stray hardly at all from Marseilles-style, except for the controversial Strength as VIII and Justice as XI. The Fool is facing the reader's right, The Lovers shows a young man faced with a choice, The Wheel of Fortune shows babewyns from Medieval illuminated texts, as well as Marseilles decks hanging on to the wheel, The Sun shows two children displaying affection in a garden, Judgement shows three figures rising from their grave rather than the more modern six, for a few examples.

The Minors are where the deck gets tricky, and the only reason I would dock any points from this otherwise wonderful deck. They appear that they could be older-style pips, but then they do have a small image that in some cases obviously show the card's meaning, and in some cases appear to be completely unrelated. If you don't know much about Medieval art, specifically the illuminated Luttrell Psalter, than these images can be baffling. The bottom line is, this is a VERY obscure source, and unfortunately, all we are given is a LWB. Had Maggie Kneen written a more detailed book, explaining these images, I would give this deck a full five stars, no question. But after several weeks of online research, as well as purchasing two rather expensive books on the Luttrell Psalter, I can say that I finally understand these Minors: They correspond exactly to RWS meanings. In some cases looking at them closely helps, but the Suit of Cups in particular requires some real study. I found many images from the Minors in my books on the Luttrell Psalter, and am left to wonder if they were all directly recreated from this text or if some were merely inspired by it? The Minor Suits are: Swords, Cups, Batons, and Coins, again avoiding the more modern Wands and Pentacles. The Courts are King, Queen, Knight and Knave.

The entire deck has a very quaint hand-drawn appearance, not only the repetitive images of the pips (the 10 interwoven swords, the 5 cups falling out of place), but the tapestry on the backs share this as well. They are standard US Games size, and pretty standard card stock. (I have small hands and they aren't too difficult to shuffle.)

If you're willing to do some research, and love medieval themes, I highly recommend this deck. Once you're comfortable with the images, it can be studied with any book that uses the RWS decks.