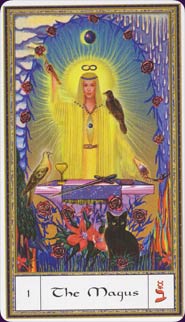 The Gendron Tarot has 78 cards of 'visionary surrealism' with spiritual, colourful, slightly New Age art. The artwork quality is uneven: the major arcana are stunning and detailed designs, but the minors are more obviously photo-composites and several have an oddly pink cast.


Card Images from the Gendron Tarot 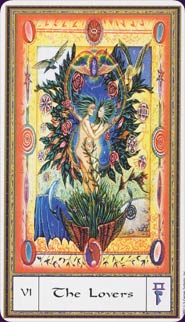 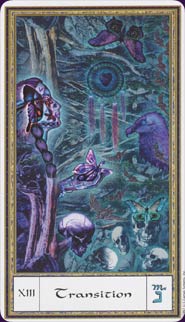 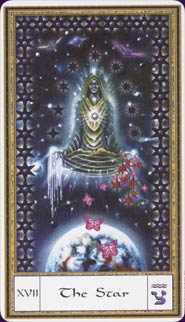 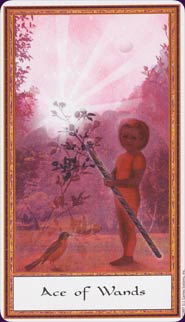 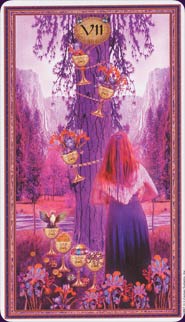 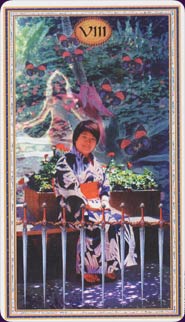 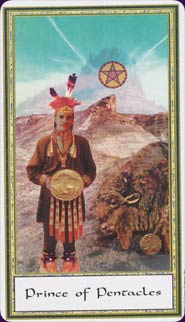 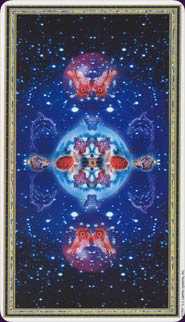 I am that which emanates beauty and all manner of life, moon, dancing stars, abundant earth, ocean's depth to match my heart. I pierce the void and multiply variety innumerable. I am love without condition For I am all that is. Every act of love celebrates my spirit. I am guidance, sanctuary, your highest self; I am the way home. Hear my call and come to me for we've been separate only in dreams.

(From a separate card that accompanies the deck.)

The Gendron Tarot is an absolutely stunning deck - feminist/Goddess/earth centered, respectful of all and following relatively traditional lines. I am as impressed with the author/artist as I am with her deck. She comes across as a visionary, in both art and words, and just as gentle as any of the mythical figures that she has illustrated. She does not hesitate to give thanks to Stuart Kaplan (head of U.S. Games) for encouraging her in her artwork, as well as to Amber Jayanti (the Santa Cruz School For Tarot and Qabala Study) for grounding her in her Tarot studies, and providing the foundation for the Gendron Tarot Wheel of Life.

The LWB that accompanies the deck includes a foreword by Amber Jayanti that gives us a nice view of how this deck came about. Also included are upright and reversed meanings for the Minor Arcana, and Major Arcana presentations that include the energy of the card, the Hebrew letter, astrological and animal associations, the symbolism within the card and the upright and reversed meanings. There are two spreads presented at the end of the LWB: the Four Directions spread and the Celtic Cross spread.

There is a larger (6" by 8 3/4", 224 page) book that is part of the book/deck set. It includes a foreword by James Wanless (Voyager Tarot), where he states, in part: "This profound book of knowledge, disguised as a card deck, reveals universal wisdom. As you internalize symbols of the external manifestation, you will realize your inner universe. The Gendron Tarot reasserts the primary function of Tarot as a personal growth path through archetypal images."

The concept of the "Sacred Feminine" is the basis for the Gendron Tarot. The images and meanings presented in this deck came about through a combination of research, meditation, prayer and ritual - something that shines through in the quality of the images and the intensity of the textual presentation.

The Gendron images themselves come from what Melanie terms a "multimedia" concept - being that they are taken from original paintings, drawings, fashion designs, and photographs, scanned into Adobe Photoshop and completed with digital painting on a PowerMac. These are all technical terms for me - what I can attest to is the result: this is an amazing deck! Part fantasy, part reality - packed with symbolism, and having with the ability to reach out and grab your heart and soul and take you for a ride deep into the archetypal echo's of life. (Speaking of which - I felt at one immediately with the Deceiver (Death) card - this is the energy of trickster coyote, and could not have been better presented.)

Melanie has come up with a way of looking at things that she calls the Gendron Wheel of Life. It is based on the four directions, and their qualities. These are her thoughts:

* South, Innocence: Karma, Life's lessons: The Fool - The Lovers (The Fool, The Magician, The High Priestess, The Empress, The Emperor, The Hierophant, The Lovers)

* East, Illumination: Enlightenment: The Moon - The Universe (The Moon, The Sun, Judgment, The Universe)

* Below, Origin: Choices: The Fool

* Above, realization: True Self Functioning: The Universe

Melanie has authored quite an in depth section on self-empowerment, based on the Ten Actions For Empowered Being. They are as follows:

1. Intent
2. Confer with Tarot
3. Sense the meaning
4. Talk with your Higher, or True Self
5. See yourself as living truth
6. Embrace your dream
7. Express your vision
8. Embody your vision
9. Walk your talk
10. Enlightened Being


Each of the Major Arcana cards starts with a short poem that embodies the quality of the card. From there Melanie goes on to list the cards various metaphysical attributions, upright and reversed interpretations, a description of the card and its symbols and a short section on how to apply the energy of the card to life situations. This last part - how to apply the card - is very much a bonus. It can be used in the context of a reading, it can be used in meditation to either release or bring in the cards energy, and it gives the Seeker a good idea of which cards they may wish to include in specific rituals and ceremonies. Horizons are definitely expanded here!

At the end of each Major Arcana card there is a short affirmation - a way to honor the card in our lives - to call in the energy and take an active step in using the tool that is Tarot. A very good example is the affirmation that Melanie presents for the Fool:

Affirmation For The Fool

I am a creation of Great Spirit, gifted with unlimited potential to express my True Self.

The presentation for the Minor Arcana is fairly traditional: upright and reversed interpretations along with intent (Wands), desire (Cups), opportunity (Swords) or result (Pentacles). The suits carry the traditional Wands=Fire, Swords=Air association, and carry the following energy: Wands carry the intent that sets our course in the right direction; Cups carry the desire that fuels and motivates our lives; Swords carry the opportunity for the expansion of consciousness; and Pentacles carry the result of our intention, desires and actions. The court cards are seen as representing personality traits and characteristics. Each suit also has the following associations listed: aspects, energy, astrological sign, element, direction, letter of the Tetragrammaton and totem animal.

Intent: Established in Being, your True Self, perform action

In her section on doing readings, Melanie list four basic dimensions of meaning possible for an individual card, or for the reading as a whole: literal, allegorical, moral and spiritual. She presents several different ways to relate to the cards, the first of which is the question and answer technique that I first came across with James Wanless' work. The next method is called the Heroic Passage, which is a journey through a specific question or issue. Also presented are one card readings, a four card body/mind/spirit spread, a four card past/present/future spread, an eleven card Four Directions spread and the traditional Celtic Cross spread.

The cards themselves are 2 3/4" by 4 3/4", on good quality, glossy cardstock. The backs show a night sky with a mandala in the middle (see top scan for this article) that would not give away whether a card was drawn in the upright or the reversed position. The face of the cards has a 1/4" white border, with a 1/4" internal border. Each Minor Arcana pip has the number listed at the top of the card. The title of the card is listed across the bottom for the court cards. The Major Arcana have the number, title, Hebrew letter and astrological glyph listed across the bottom.

Many different cultures are represented here, and the Major Arcana carry a sense of fantasy that is phenomenal! One of my favorite Major Arcana cards is the Universe. Here we see a Goddess standing, facing us with her arms open and her palms out. A tree of life springs from each hand, with the background of the night sky, or the universe, behind her. What appears to be translucent wings appear behind her, with the globe of the world floating in front of her. In the night sky we see the form of a black bird in flight. For me, this is one of those cards that carry deep shamanic energy, and can be entered with the slightest glance.

The Sacred Feminine in the Magus is something that is very, very empowering for me. Melanie's Magus stands in the traditional position of one hand pointing to heaven, while the other points to the earth, indicating that the Magus acts as a channel for energy from the spiritual to manifest in the physical world. On the table in front of her lie the elemental tools of transformation. In front of her table is a black cat, with a black bird resting on her left shoulder, and a second bird perched on the table in front of her. Above her head shines the moon - in its full and dark phases. Behind her head we see rays of spiritual energy, while over her head rests the traditional lemnescate.

The Moon, representing maiden/mother/crone, is one of my favorite cards in almost all decks. It probably helps that it is also a birth card for me. Melanie has done the Moon in watery colors of blue and lavender, with a lavender night sky showing the phases of the Moon from new to full. In the watery blue of the ocean we see the face of a Goddess, with twin dolphins jumping over it. Schools of fish appear in the water,

There is grace, fire and wisdom in this deck - it makes me feel at home. I recommend this deck to all levels of Tarot students/readers. While the symbolism is not along the traditional lines, such as Rider-Waite, the interpretation is. This is a deck that can be used for reading, meditation or ritual, and can be safely used in group settings (i.e. no issues with nudity etc).