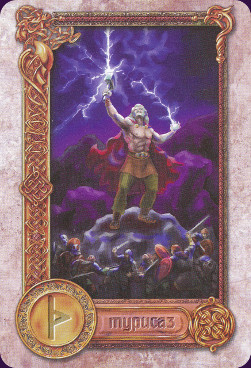 Legend of the Northern Journey: Rune Cards are a Russian-published set of 25 rune cards. The 24 Elder Futhark runes are illustrated with scenes corresponding to each rune, and there is one blank card to represent the modern addition of the blank rune.


Card Images from the Legend of the Northern Journey: Rune Cards 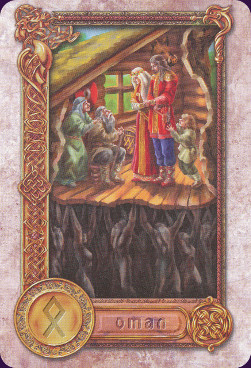 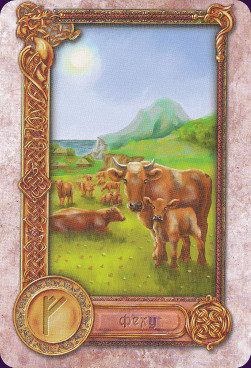 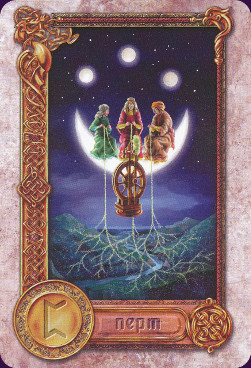 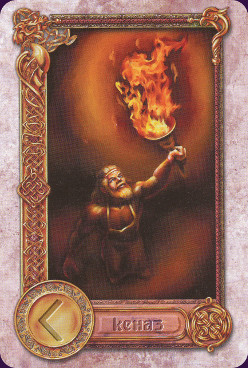 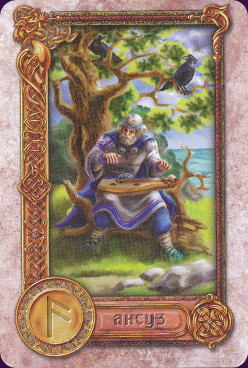 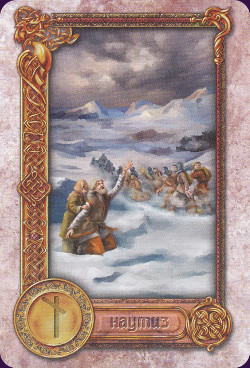 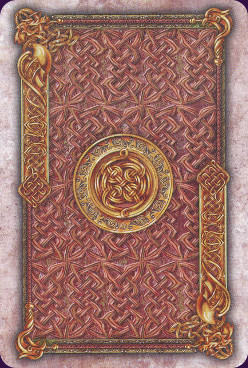 Legend of the Northern Journey: Rune Cards Review by Alta

This is a well produced set of cards, each with the symbol of a rune from the Elder Futhark and an image illustrating the meaning of the rune. The printing is clear, with good colour reproduction, and the cardstock is excellent.  It appears to have close to a matt finish.  There are 24 rune cards and one card for a blank rune.  I’ll discuss the blank run card later.

The accompanying booklet is half in Russian and half in English, each rune getting a half page, and includes both upright (bright-stave) and reversed (murk-stave) meanings.  Each rune has a range of meanings and the creator and artist have chosen to illustrate the principal meaning of each.

I found the meanings, while condensed and almost in bullet form, to cover the main points of the meaning of each rune.  They also include a bit of advice with each, suggesting possible actions or changes or warnings associated with the various runes.

The Blank rune is not in the older traditions.  It was originally introduced by rune popularizer Ralph Blum in 1982.  He has written seven books on runes and probably the best known advocate in the West.  The card was included here as users may have come from his work and might wish to continue to use it.  Ms Simonova gives a useful starting point for this card though many users may choose to leave it aside.

The illustrations go from the literal, an illustration of oxen for Fehu, to the mythological, Perth(ro) which shows the three Fates or Norns, to the mundane, for Othal(a) showing a family scene.  I think they are useful both as memory devices for learning and to open the reading to intuition.

This set could be used as an introduction to the runes as, while brief, the write-ups cover the main points and I found the meanings selected to be true to rune tradition.  The illustrations can be seen as a sort of ‘Flash Card’ mnemonic device for the meanings and may well provide some intuitive insights when several cards are read together. The author gives three sample spread types.  Clearly expanded meanings, historical background and more spreads can be found in a good book which the purchaser might use with the cards.

The names of the runes are written in Russian rather than the German names, however the English part of the booklet refers to each by the German name. A more experienced user might like them as the small packet is quite portable and easy to shuffle and lay out.

My personal favourite reference books are:  Thorsons Principles of Runes by Freda Aswynn, and Runecaster’s Handbook by Edred Thorsson.  These could add depth to using the cards as you get accustomed to them.


Complete Details of Legend of the Northern Journey: Rune Cards


Similar Decks to Legend of the Northern Journey: Rune Cards