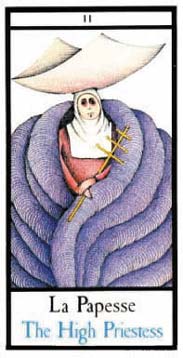 The Maddonni Tarot is a mysterious French tarot. Card scenes are set against white backgrounds, and the artist's style is unique and interestingly textured.


Card Images from the Maddonni Tarot 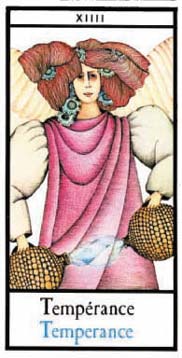 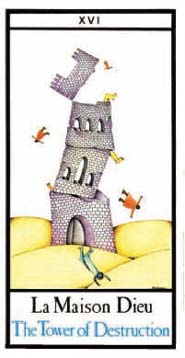 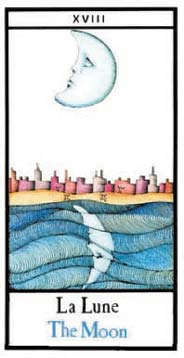 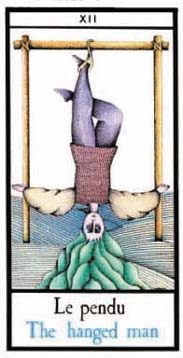 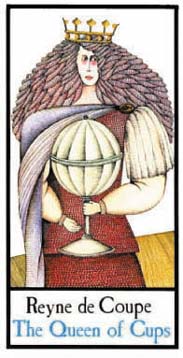 I chose this deck because it stood out from all the others in the shop; it was first published in 1981. The art is attractive and unconventional, body proportions are not respected which gives the deck a very distinctive style. The Hermit and the High Priestess are good examples of this. The back of the cards and the font used for the titles complement the art.

The cards have a white background and the colours are mostly pastels. The characters have unusual hair. The colours and hair are used in the court cards to indicate suit, for instance the sword court characters all have dark, wavy hair and orange and purple sleeves.

The traditional symbolism was kept with some minor changes (for instance the Star has only one jug of water, not two). There is no use of alchemical symbols but this gives the cards an uncluttered style. The titles are taken from the Marseille Tarot, the Hierophant is the Pope and the Tower is the Tower of Destruction. It also has Justice at VIII and Strength at XI. The roman numbering follows the old convention, for instance the Hermit is VIIII instead of IX.

The names of the major arcanas and the court cards are given in both French and English. The only negative comment I have about this deck is that the English translation is not always consistent. For instance the Magician is to in the leaflet as the Juggler, the High Priestess as the Popess or Woman Pope, the Tower as the Temple, although all have their right name displayed on the cards.

The pip cards are very simple with just the number and symbol of the suit displayed. So instead of six swords on the card you will see just one sword with the number 6 in the corners.

Each card is given a number from 1 to 78 in the booklet (this number is not printed on the cards). The booklet gives a physical and moral meaning for major arcanas. The minor arcanas have their meaning given in combination with other cards using the 1-78 numbering system. It means you have to look up the number elsewhere in the leaflet. I imagine this would be very frustrating if you're learning and this is why I would not recommend this deck to a beginner.

Finally the quality of the deck and the coating used on the cards is very good, I have used them for 18 years and most of the cards are in perfect condition. I would recommend this deck to a collector or an experienced reader looking for something unusual.