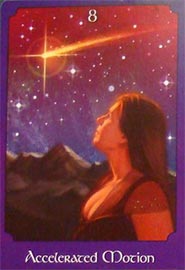 The Psychic Tarot is a hybrid tarot/oracle deck. It has 22 major arcana (retitled), four suits of nine numbered cards, and seven chakra cards. The art is non-traditional but attractive, and is designed to be intuitive.


Card Images from the Psychic Tarot 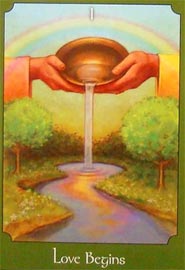 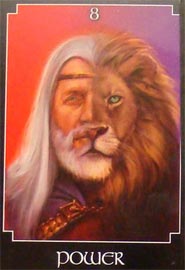 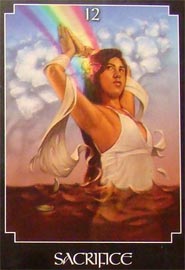 The Psychic Tarot is a 65 card oracle deck that follows the traditional template of the twenty-two cards of the Tarot Major Arcana, but uses only 36 cards from the Minor Arcana – the Aces through Nines. There is no explanation given for the exclusion of the four Tens and the sixteen Court cards. To round out the 65 card deck Holland has included seven cards representing the seven major chakras (Base, Sacral, Solar Plexis, Heart, Throat, Third Eye and Crown). This is not a deck for someone in the beginning stages of their Tarot work. In fact – it really does not qualify as a Tarot deck at all.

In his introduction, Holland found that when he began working with the Tarot the cards seemed to reach out to his intuitive mind, bringing to his attention colors, shapes, figures, words, numbers and symbols. All of this (with the exception, perhaps, of words) is inherent in the archetypal quality of traditional Tarot. Whatever the Seeker is attracted to in the card is the gateway to the wisdom of the card. (My thoughts.) The cards for Holland acted as a channel for psychic information. (Traditionally the Tarot is seen as a channel for spiritual wisdom.) The Psychic Tarot oracle deck is based on Holland’s understanding of the Tarot. He feels that the Tarot helps the Seeker tap into powerful insights, purpose and guidance in all areas of life.

The Psychic Tarot comes as a set with 65 cards and a 167 page guidebook. The box is traditional Hay House – sturdy, with a lift off top. The bottom of the box is deep blue, with the top a mixture of deep blue and a lighter blue, with gold lettering for the deck name, black lettering for the author’s name, and smaller white lettering for deck info. The imagery from the back of the cards (Fractal River Paradigm) is imposed on the inside of the bottom and top of the box.

The traditional order of the Major Arcana is kept, but the cards are retitled according to their archetypal quality (i.e. The Fool becomes New Beginnings, The Magician becomes Awareness and The World becomes Universe). The four suits become Physical (Pentacles), Emotions (Water), Mental (Swords) and Spirit (Wands).

The cards themselves are 3 ˝” by 5”, of good quality, glossy cardstock. The edges of the cards are gold gilt, giving a very nice “upscale” feel to the deck. The backs have a Ľ” dark purple border, followed by a thin gold border, surrounding artwork entitled “Fractal River Paradigm”, by Vandorn Hinnant. The feeling one gets from this artwork is very much one of “other worldliness”. The backs are reversible.

The card fronts, done by artist John Matson, have a Ľ” black border, with a thing white border surrounding the card imagery. The card number is at the top of the card, in white, with the author’s keyword at the bottom of the card (in larger white lettering). The structure of the cards is very true to life, with a little whimsy added. The colors are intense, and draw you into the card. The border for each suit reflect the color assigned to that suit: Physical (Red), Emotions (Green), Mental (Indigo), and Spirit (Violet).

The imagery is good, but it is not traditional Tarot imagery. For instance, New Beginnings (the Fool) holds wands in both hands, as he walks over a globe of the Universe. Behind him we see a brick wall, with a door in the middle. What is missing are things like precipice he is about to walk off of, and his wallet, filled with his life experiences and wisdom.

Awareness (The Magician) does not show the elements at all, focusing instead on the crown chakra of the male figure on the card. Intuition (The High Priestess) is seen form the side, with a door behind her. She appears to be looking into a circular plate that hold the universe within it. From her neck hangs the symbol of Venus. But where are the pillars, and where is her scroll? One of the better cards would be Power (Strength), which shows a male figure with one side of his face human, and the other that of a lion.

The chakra cards are all in the color connected with their specific chakra, showing a mandala in the middle. According to the accompanying Guidebook, when the chakra cards show up in a reading, they indicate that the Seeker need to be especially aware of this energy center, and the qualities that is governs.

I cannot recommend this deck for Tarot work, because of the missing elements (Tens and Court cards), and because the imagery is not traditional. As an oracle deck, it does work. The illustrations are beautifully done, and the addition of the chakra cards gives the Seeker one more tool to work with. I also see having keywords, rather than card titles, as a problem. Cut the words off (something I personally would never do!), and the Seeker has a better chance of accessing the wisdom in the cards.

This deck is loosely based on the Rider Waite Smith system, but the court cards have been replaced by "chakra cards," and the pips range from 1-9 (no tens).

While the themes and emotions of each card match the RWS themes, the actual actions in the card vary from the traditional pictures seen in a RWS deck. For example, the traditional "Death" card is called "Transformation," with a beautiful female angel who appears to be holding onto a face/creature she is riding, a large dark face, going "somewhere." There appears to be concern or strict attention in her eyes as she looks to the distance.

The Hermit, in this deck called "Solitude," shows a long-haired brunette woman, kneeling before a golden pillar, with an open book before her with writing on only one side/page.

Each suit is represented by a border color and rather than pentacles, cups, swords and wands there are:


While the cards do not use the traditional swords, cups, pentacles and wands attributes, the Temperance card -- in this deck called "Balance -- shows a male angel, encircled by a circular light. hands open to the 4 traditional suit correspondents hovering before him: a wand, a pentacle, a cup and a sword.

This lovely deck comes with a 169 page booklet (same width and height of the cards) which includes tips on understanding the card structure, getting started, card spread suggestions, brief tips on psychic development, color interpretation, numerological meanings, and symbols and images. Each card is described in 1 1/2 pages in the booklet.

The deck is beautifully boxed in a stunning, rugged cardboard box with a lid that removes and is likely to withstand much wear and tear, not the kind of box that is discarded, but one to keep to protect the deck.

The bright and colorful illustrations are rich and high quality paintings, and the cards themselves are gold-gilded with key words/phrases on each card. The author mentions that the cards are designed to feel positive with "no negative cards." There are still the traditional "tough" cards that allow the reader to work through difficult life concepts, such as:

The 3 of Swords, which in this deck is 3 of Mental (indigo) called "Heartache and Loss". 5 of Swords is called "Conflict and Defeat, and 9 of Swords is "Suffering in Silence."

The Majors follow traditional RWS themes, but have been renamed:


Some examples of Pip card keywords are:


With the cards measuring 5.5 x 4 x 1.9 inches, and of stiff/high quality glossy card stock, they are most easily shuffled without riffling the deck due to the stiffness and slightly large size.

This is a wonderful deck for beginners as the cards are clear and key words give a springboard for intuition. Having no court cards, a beginner need not worry about whether a card is a "person or energy," and the clear, modern keywords allow for free-flow intuitive thought.

If you are an experienced reader, you'll likely enjoy this deck if your are comfortable straying from a 78-card traditional deck.

The back of the cards has a symmetricl purple-colored abstract picure with circles that overlap. Reversals cannot be determined by looking at the back of the deck.

This vibrant deck will bring many insightful and clear reading possibilities. I enjoy using it doubled up in readings with traditional cards, as people clearly respond to the pictures and words in this deck in an almost "automatic" way.