The Tarot of Timeless Truth is a complete photographic tarot deck. Its bewitching images are not illustrated, but a sometimes surreal photographic montage.

Card Images from the Tarot of Timeless Truth 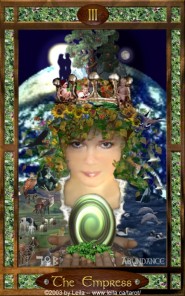 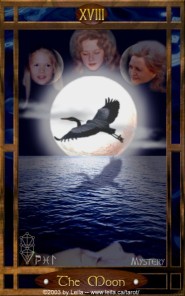 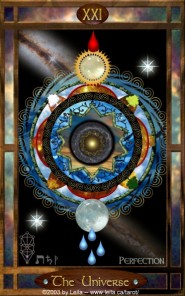 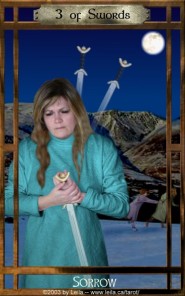 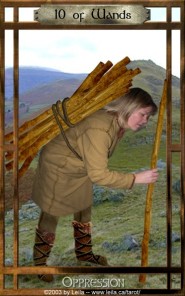 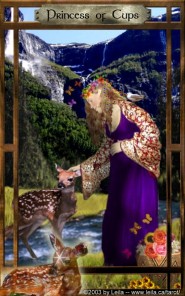 Sometimes things fall into your lap. Tarot Of Timeless Truth is one of those things for me. I heard about it on one of my e-lists, visited the author's site, and immediately knew that I had to have this deck! Self-published by Canadian author/artist Leila Vey, the cards are part reality, part fantasy, very centered on the elements and reflective of Vey's Northern European background. There is a 78 card deck, and an accompanying book also entitled Tarot Of The Timeless Truth. Although I am going to use my writer's prerogative to review the book and deck together, they are sold separately.

The book is 5 1/2" by 8 1/2", spiral bound. Vey has the type of introduction that I like to see in a book like this: a short explanation of what the Tarot is and what it does, a small background on the deck itself (it came about because the no existing decks would work for long, and Vey wanted to bring out something that she could use for the long term), cleansing the cards, getting to know your deck, grounding and centering and the actual performance of a reading. Vey has done a very credible job of giving keys as to how to read the cards by position, relationship to each other, numerological attribution and supporting/opposing cards.

She does a very interesting presentation of the cards - one that I have really not seen before. I am going to describe the cards by category, as each category is presented in a slightly different manner. The first category that we will look at it the Major Arcana. To begin with, they have attributions printed in the left hand corner that the other cards do not: a small Kabbalistic glyph of the Tree of Life, with the appropriate pathyway for each card marked; the Hebrew letter for the card; the astrological sign or planet associated with the card; the card's Rune correspondence (which Vey notes is a totally subjective association).

The presentation in the book is both visually pleasing and well constructed: The name of the card appears in the upper right hand corner of the page. This is followed by a black and white scan of the card, with the following attributions printed to the right hand side: Element, Astrological Ruler, Kabbalistic Path, Crystal and Rune associations. Under that Vey has written affirmations for each of the cards. Following this Vey lists Key Concepts (upright keywords) and Shadow/Reversed Concepts. I like the Shadow terminology - it opens up the meaning of the reversed or challenged cards greatly and really states what this card is in the Querent's life.

Each card gets to speak for itself next. I like this concept - it makes it very easy to enter a card when you think you are having a conversation with it! There follows a section called "Ask Yourself This". I first saw this used by Mary Greer in "Tarot For Yourself" - asking questions about how the energy of the card fits into your life. An excellent way to work with the cards!

Next we have "Uncovering Your Truth", where Vey focuses on different aspects of each card: i.e. color, content etc. After this Vey has a short paragraph describing the card itself (which is one reason that I strongly suggest getting the accompanying book with each deck that you buy). After this Vey lists Divinatory and Reversed meanings (she follows the Waite system closely here). After that Vey lists the Correspondences: Astrological Ruler, Rune, Crystal, Kabbalah, Supporting Cards and Opposing cards.

I am the magician, the druid. I contain within myself all of the mysteries of the universe. All the ingredients for life itself are mine to use for enrichment and wisdom. I possess all the resources I need for my journey, wherever it may take me, and I know how to use these tools with great skill and intelligence. My skill affords me great power; I need not look outside myself for anything I require. With the power of my mind, I can accomplish anything. This is the magic of the magician. You too possess this magic within yourself. 1

The Minor Arcana for this deck carry the traditional elemental attributes of Wands=Fire, Cups=Water, Swords=Air and Pentacles=Earth. Vey does a brief discussion of the esoteric meaning of the numbers, with the Aces representing new beginnings, seeds of change and primal force. Numbers two through nine are seen as representing different aspects of each of the suits: i.e. Two's are balance, duality and decisions; Three's are planning, projecting and creating; Four's are stability and manifestation; Five's are challenge and adaptation; Six's are harmony and a physical coming together; Seven's are inner accomplishments and evaluation; Eight's are structure, inspiration, limits and order; Nine's are integration, progression and fulfillment. Ten's represent the ultimate conclusion of the theme's represented by each suit.

The presentation for the Minor Arcana has the Number and Suit at the top right hand side of the page, followed by a black and white scan of the card and the card "speaking". This is followed by the Key Concepts and Shadow/Reversed Concepts; Ask Yourself This; Uncovering Your Truth; Description; Divinatory Meaning; Reversed Meaning; Supportive Cards and Opposing/Balancing Cards.

The presentation of the Court Cards is as follows: the title and suit appears in the upper right hand side of the page. Under this is a black and white scan, with the card speaking for itself to the right of the scan. Under this Vey lists the Key Concepts and Shadow/Reversed Concepts, followed by Uncovering Your Truth, Description (which includes the totem animal), Divinatory Meaning, and Reversed Meaning.

From the book, for the Princess of Wands:

The Princess of Wands sits by a campfire, carving a fertility figure. Innovator that she is, she has spontaneously decided to bestow character on her carving by giving it a face, perhaps being the first ever to break an ancient taboo. She glances over her shoulder, not quite sure whether she is protecting her creation from being found by disapproving elders, or whether she is hoping to see someone with whom she can share her excitement. She has risked the anger of her tribe and the gods to give t he world a new perspective. her vision has endured, changing art and self-expression forever.

This is the energy of the Princess of Wands. She will risk everything for the opportunity to express her originality. Her enthusiasm and excitement is contagious and inspires us all to our highest potential.

The totem for the Princess of Wands is the blue jay. She honours this bird with its sharp mind, its courage, its ability to find new ways to express itself, and its playful, somewhat mischievous nature. 2

The section on spreads provides a nice groups of choices for reading: the Single Card Spread, the Three Card Spread (past/present/future), the Celtic Cross Spread, the Elemental Spread (always one of my favorites!), the Answers Spread (a spread well worth learning!) and a short section on reading without spreads.

Vey also has a section listing several different uses for the Tarot, amongst which are: Initial Reactions (I liked this - the card we are most attracted to represents the energy that you need to concentrate on most, and the one that will bring you growth and healing; the card that you liked the least represents a major challenge to you at the time it was drawn.); Meditation; Journeying; Attracting Needed Energies; Dealing With Negative Energies; and Dream Interpretation.

There is a very important two page section that has a hidden gem: Recommended Resources. Some of the resources one might expect to find are here, along with the hidden gem: a link to the Orphalese Tarot site. This is a software program written by Richard Jeffries, and well worth looking into by all Tarot professionals. Please pay attention to this line from the book: "Tarot Of Timeless Truth is available for use with this program as well." 3 From her site, you can purchase a disk that allows you to use Tarot Of Timeless Truth with the Orphalese Tarot program. IMHO - This is a biggie!

On to the cards themselves. They are approximately 3" by 4 5/8", of sturdy, good quality glossy cardstock. They will hold up under use, and can be managed by those with smaller hands. The backs are of a black background, with a central figure composed of spirals, a mandala, a shield with Pentacles in each of the four directions and a central white, six pointed star. Smaller versions of the glyph are scattered through the sky. You would not be able to detect whether a card had been dealt upright or reversed with this deck.

The face of the cards also has a dark background, with a small black border surrounding a golden "window" type border. Looking at each card is indeed like looking through a window at the scene within! For the Major Arcana, the card number appears at the top of the card, with the title across the bottom. Above the title, at t he bottom on the left we see a glyph of the Tree of Life, with the proper path highlighted, the Hebrew letter for the card, the astrological sign/planet and the associated Rune. On the left hand side of the card is a keyword.

There are several cards that really strike me in this deck, so I will attempt to pull one or two from each category. The most striking change was the Hanged One - Vey represents this card with a fetus, much as Julia Cuccia Watts does in her Ancestral Path Tarot. The Sun is a stunning card showing a Raven with his wings around a shining Sun, with a delightful country scene under it. the Ten of Cups shows the intuitive nature of this card by showing a central headshot of a young woman who is present in spirit. Smaller headshots in a circle around her represent the people from her past, and her own children, who are the future. The Ace of Cups shows a large Cup in the center of the picture, coming out of a body of water. In the white light over the cup we see a dolphin jumping, with a rainbow and six stars in the background. The Queen of Swords shows a "no nonsense" type woman kneeling, with water and mountains behind her. She looks straight out of the picture. She is tending a wounded man's injured leg. The dragonfly appears in the lower left hand corner of this card as the totem animal. the Prince of Wands is a real character! He is depicted as a young man dancing passionately around a fire, spear in one hand and amulet dancing against his chest as he regales his audience with his story of a successful hunt. His totem, pictured in the lower left hand corner, is the panther,

I laughed with this deck, ooooh-ed and ahhhhh-ed with it. There is wonderful material to work with here - it will take you as far as you wish to go. I recommend this for all levels of Tarot students/readers.

I am going to end this review by letting the deck speak for itself. There is a separate card that comes with the deck, with the following inscription:

There is a spark in all I see In Truth and Light it sets me free. Spirit moves like a gentle breeze, As wonder brings me to my knees.

Sacred earth, fire, wind and rain Enrich us all for good and gain Show us Truth so we might live To bless and love, to grow and give.

So mote it be!