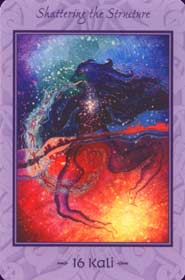 The Tarot of Transformation is an interpretation of tarot with a focus on self-change and transformation. The card images are abstract and vibrant, and each is titled with a spiritual phrase.


Card Images from the Tarot of Transformation 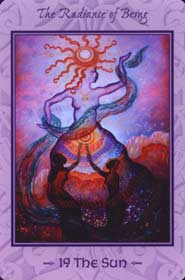 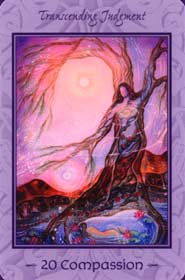 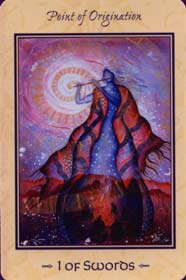 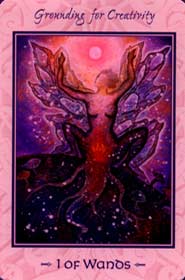 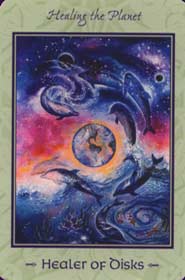 Each transformational tool that we bring into our lives teaches us something. The Tarot and its archetypal images is a teacher that can take us into many worlds other than our own. The "Tarot of Transformation" works with imagery that goes far afield from that of more traditional decks. The creators of this deck draw from their own backgrounds to create this tool of transformation - Willow Arlenea holds degrees in Fine Arts and Transpersonal Psychology, Jasmin Lee Cori is a licensed psychotherapist who uses the transpersonal approach in her work.

The authors see the "Tarot of Transformation" as a tool of deep spiritual transformation, and have approached all of the cards in this manner. From the book:

One route to transformation is to work with present experiences. These are the grit that forms the "pearl" or wholeness of your being. Every topic discussed in this deck - including creating balance in your life, working with the Shadow, recovering your instinctual wisdom, releasing stuck energy, the need to inspire and refresh yourself, dealing with doubt and developing compassion, is a building block for transformation."

The Major Arcana, renamed, and their themes are as follows:

0    Fool: Innocence or Ignorance? 1    The Magician: Master of Conscious Creation 2    The High Priestess: Feminine Mysteries and Intuitive Wisdom 3    The Earth Mother: Queen of Life 4    The Green Man: Ruling In Harmony With Nature 5    Spiritual Leaders: Taking The Hierophant Off The Pedestal 6    The Lovers: Love In The Highest Octave 7    The Chariot: Agent of Change 8    Balance: Restoring Cosmic Order 9    The Crone: The Light of Introspection 10    Wheel of Fortune: Flowing With Change 11    Strength: Moving From The Core 12    The Hanged Man: Not In Control 13    Death: Grieving And Letting Go 14    Temperance: Integrating Polarities 15    The Devil: Separation From The Source 16    Kali: Shattering The Structure 17    The Star: Guiding Light 18    The Moon: Peace In The Darkness 19    The Sun: The Radiance of Being 20    Compassion: Transcending Judgment 21    The Cosmos: The Multidimensional Universe

The interpretation of the suits follows traditional form. Wands are creativity, represented as "chi", or life force, which is explored here under the guise of the chakra system. Cups represent the emotional world, explored in this deck through the framework of several psychotherapeutic approaches (i.e. the Ace of Cups discusses the energy of Watsu, a form of water therapy). Swords represent the mental realm, and what the authors term "original patterns". Disks represent the material world and daily life, which is expressed in this deck through animal imagery.

To give you an idea of how the pips are presented, I am going to present the author's version of the Aces in each suit. (I have to say, I was a tad irritated at the term "one" being used for the aces. Yes - the aces vibrate to the number one, but have you ever thought or heard of the "One" of Wands/Cups/Swords/Pentacles?)

Grounding For Creativity (Ace of Wands): This card is done in tones of pink and purple. In the center of the card is what the authors term a nature spirit, squatting on the ground with arms raised to the heavens, and "roots" going down into the earth. The authors describe this card as representing the grounding of the fiery energy of the Wands. The number one provides the base to support the personal energy of creativity.

Dissolving Into Oneness (Ace of Cups) is a very heartwarming card, done in shades of blue and purple. This card represents our sense of wholeness in the emotional plane of life. It is where our needs are met, where we are nurtured. The illustration is fascinating - a female figure is pictured, with her head literally going into and being part of the universe. Her shoulders and arms are shown - with her arms spread wide to encompass a large "belly", in which we see a fetus, surrounded by liquid. The sense of the fluid nature of the fetus encompasses the authors feeling of the fetus being connected to the waters of the ocean.

Point of Origination (Ace of Swords) is done in shades of pink, purple and blue. The authors portray this card as the process of our ideas and patterns coming into consciousness (Swords being the mental suit). This card is very fantasy like, showing a crystal ball like structure with people sitting in a circle. Atop this - coming out of it, actually - is a form playing a flute like instrument. For the authors, this card represents the moment when our ideas are conceived.

Birth into Form (Ace of Disks/Pentacles) is very free form fantasy, done in shades of pink and purple. The authors refer to this card as representing new beginnings in the world of our daily life. The representation on this card is that of eggs in a nest - the new beginnings of life.

The presentation of the court cards in this deck is interesting. The authors have attempted to take them into the "gender neutral" realm. That certainly blows the traditional Tarot court card cosmology all to heck! They go further than that - they say that there is "no connection" between the cards - that they are simply four ways to express the nature of their suit.

The Server expresses our impulse to help in each of the realms (mental, emotional, physical, spiritual). The Teacher is the embodiment of some type of wisdom in our lives pertinent to that suit. The Healer is the influence of healing - whether we are healing ourselves or enabling the healing of someone else. The Master is all of the lessons of each suit coming together in our lives. The authors see the combination of the four master cards in the deck as being symbolized in card 21 of the deck - the Kosmos (The Universe).

The authors discuss ways in which the cards can be used - one of which is to use them as a jumping off point for work with other modalities. There are three basic spreads presented in the book.

The two card spread places the bottom card as the issue/situation being addressed, and the crossing card as representing additional (often unseen) influences.

There are some nice reference charts at the end of the book that show what is termed the "card correspondence" for each card - basically the "meaning" or energy of the card. There is also a reference chart that I believe is unique to this deck - on that talks about "themes", and the authors choice of cards for working with specific themes. For instance, under creativity they list: the Sun, Freeing Your Expression (Five of Wands) and Grounding For Creativity (One of Wands - my version = Ace of Wands). I beg to differ with many of t heir choices here - but these are personal choices, and this is a chart that each person working with the Tarot needs to make for themselves. What a wonderful tool of transformation this can be!

This deck would a good choice for someone working on their own life choices, or working with their clients to make better choices. It is not a deck for beginning Tarot students, as in many ways it does not follow the lines of Tarot at all. An interesting use here might be to read with a more traditional Tarot deck, and then do a comparative reading with the "Tarot Of Transformation" - that is, to lay out the same cards that were drawn for the traditional reading and see what new insights are gained.


Complete Details of Tarot of Transformation


Similar Decks to Tarot of Transformation