The Tea Leaf Fortune Cards is a huge set of 200 cards that illustrate the images and meanings that might appear in an actual tea leaf reading. The cards are round - to resemble a tea cup - and each has a simple picture, a title and a short piece of advice. 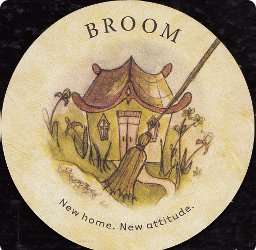 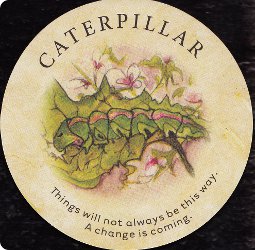 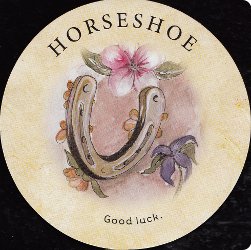 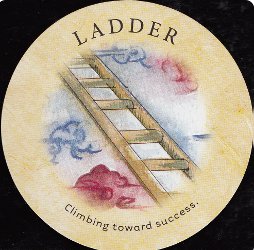 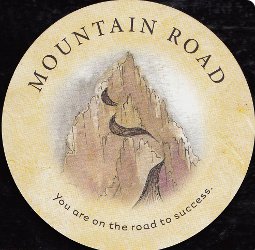 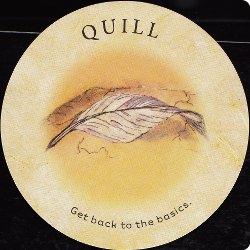 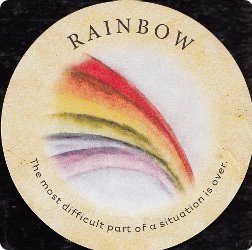 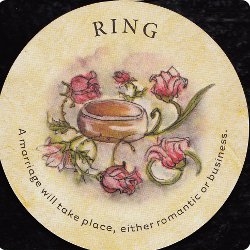 Reading tea leaves – how much more esoteric can one get! One might expect to find this in a quaint little tea room, or perhaps in a Harry Potter movie, but as an everyday part of life … something that we can all do? Not without years of training, and a very will developed intuition and imagination. In reality, Rae Hepburn did have years of training … from her father, who studied Oriental and Indian metaphysical philosophies. Her father invented games for her when she was a child, games that were based on intuition. One of their favorite games was absorbing energy from another person's aura and interpreting it. Her Hepburn learned to go with her gut feeling, bypassing the logical processes of the brain.

Hepburn learned tea leaf reading from an Aunt. Hepburn's friends were eager to learn tea leaf reading, and asked her to compile a list of images and their meanings. The list that she compiled was daunting – 500 images, and their associated meanings. Seeing that memorizing this list could be rather over-whelming, Hepburn decided to develop a set of cards that would serve the same purpose as the images in the tea leaves.

To make the list more manageable, Hepburn concentrated on the images that appeared most frequently, eliminating the ones that rarely appeared. She also eliminated symbols that duplicated the meaning of another symbol. The cards are round, so that the resemble a teacup. A personal thought here is that round cards can also convey degrees of meaning (as part of a circle of 360 degrees).

The deck and companion book come is s sturdy cardboard box, with a cover that lifts up, but not completely off. There are two sections for the cards, along with a gold bag to place them in so that they can be mixed and drawn for readings.

The 98 page companion book begins with a history of tea and tea leaf reading, then moves into the actual manner in which tea leaves are read from actual tea. I found this to be both complex and fascinating. I also found myself thanking my lucky stars that I was going to be reading from a deck of cards! This section also gives an example of one type of Tea Leaf reading - Reading For The Coming Year.

Three methods are presented for using the Tea Leaf Fortune Cards – (1) The Coming Year, (2) The Coming Week, and (3) Astral House Pyramid. The suggestion is made that the reader use the Coming Year reading first, so that the Seeker's long term energy has time to be absorbed. I am fascinated by this method, as the reader ends up with four cards for each month, which are then interpreted together. One card is drawn for each month, then the cards are remixed, and the next round is drawn. Quite interesting!

For the coming week, seven cards are drawn, mixing the cards between draws, with the Seeker concentrating on what is going on in their life. The cards are read as a whole, as a story, rather than as individual days.

The Astral House Pyramid begins with the Seeker picking an Astral House card that represents the area of their life that they want to know more about. Underneath this card are placed three lines of cards – two cards in the first line, three cards in the second line, and four cards in the third line. Each line represents things that could happen within that number of days, weeks or months.

Sample readings are presented for each of the three spread types.

The card symbols are presented in text only. As an example, I have chosen Bat:

Bat: Take care – enemies are working against you. A bat flies out of its cave under the cover of darkness, hunting for prey. The querist should beware. The bat is warning you to take extra care in what you say and do. Enemies are hiding in the dark, ready to strike at the first opportunity.”

The imagery in the cards is presented in a very gentle, “Currier & Ives” type manner, circular in nature, to fit in with the card itself. The edges blend into the card, rather than standing out against it. Symbols are diverse, including Angel, Apple, Axe, Bat, Bread, Butterfly, Candle, Claw, Harp, Nest, Older Man, Older Woman, Torch, Wheel and Wreath. I found the depth of symbols to represent life and its issues and situations very well.

Anyone, from any background, could read well with these cards. It is a fun system to work with, but it is also accurate. (My readings did reflect what was going on in my life, and my clients lives.) Whether reading the cards for pleasure, or looking for specific answers, the Tea Leaf Fortune Cards have wonderful insight to offer!