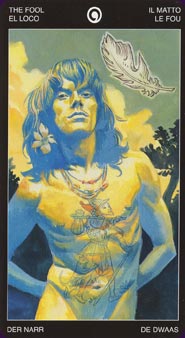 The Tattooed Tarot is an unusual style of Tarot, with illustrations of tarot imagery tattooed onto people. The major arcana cards show people with Marseilles tarot images tattooed on their bodies, while the minors show a more generic image that corresponds to the card.


Card Images from the Tattooed Tarot 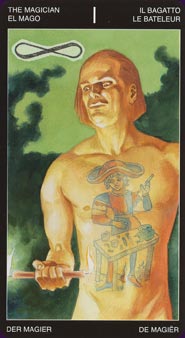 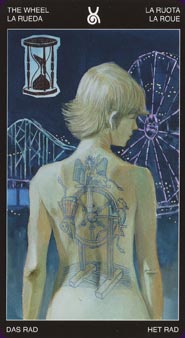 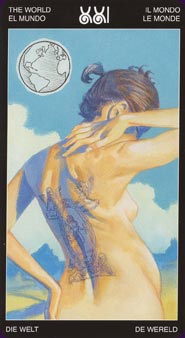 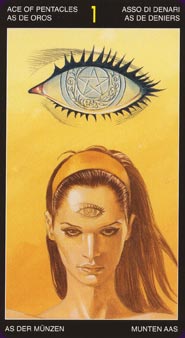 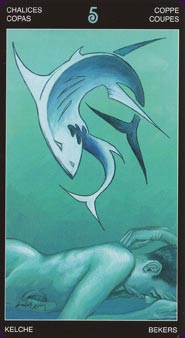 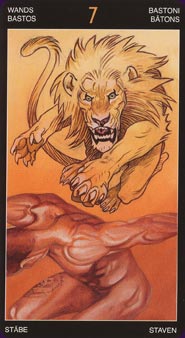 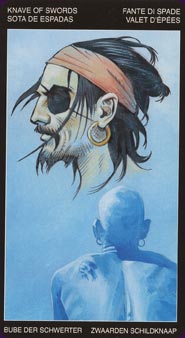 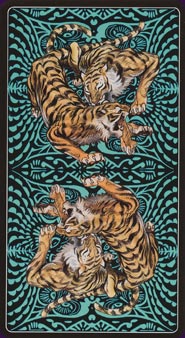 I didn’t know what to make of this deck when I first got it. I had to leave it alone for a while, as there is so much to take in. Symbols from our multi-cultural world abound, but non-sequentially - i.e. unlike the familiar format which characterises decks such as the Ages tarot, Haindl’s tarot, or the Ancestral Path deck (to name but 3). Within these 3 decks, each suit contains images from various countries in the world and their people. Within the Tattoo Tarot, familiar cultural symbols are not kept within particular suits, but pop up randomly.

This isn’t a criticism! It’s simply the reason I found this deck difficult to understand at first. However I was initially struck by the high quality of the art and I’m glad I returned to it, as it has now become one of my favourite tarots.

Solandia has described already how the images are realised in relation to the character on the card, the symbol for the card and its appearance on the body of the card’s protagonist. I would like now to add a few of my personal thoughts about the chosen imagery.

First of all, I have to say that I am generally disappointed when a tarot fails to stay at least 50% faithful to what it is generally accepted a tarot deck is: 78 cards, 56 minor, 22 major, with images that reflect the generally accepted meanings of the cards agreed by the Golden Dawn. Lo Scarabeo have often, and to varying degrees, changed the meanings, as the images themselves from many of their other tarots attests, to the frustration of collectors and readers alike (the Reincarnation Tarot, Imagination Tarot, Dante Tarot, Kama Sutra Tarot – it goes on…..) However, I continue to buy (most) of their offerings as occasionally they come up with something wonderful. Also, I can’t deny that they are contributing to the tarot world from the spiritual home of Tarot, Italy itself, where it all started over 500 years ago.

The suits most faithful to the traditional tarots of the past are the major arcana and the suit of swords. However, there is no slavish abeyance to the Waite-Smith here! Getting the balance right is what really makes a new tarot worthwhile. As already observed by Solandia, the fool looks a little like Jim Morrison – I think there’s a bit of Anthony Keidis from the Chilli Peppers in him too. And as you’d expect from an image honouring great rock’n’rollers, this guy’s no fool! His symbol is simply a feather – a great take on the familiar representation of the card.

We do come across my afore-mentioned observation within this suit, a mix of cultural symbols: the Egyptian Ankh on the Priestess, the Mayan death’s head on Death, the Tasmanian Devil on – (you’ve guessed it), the Native American symbol for the Sun (on the Sun!) And a wonderful image on Strength – Samson’s column, breaking.

However as I said at the beginning, this isn’t a criticism. It’s simply something that takes getting used to, if you’re used to decks which follow a pattern. Within the suit of cups, the Middle-East is represented by Jesus wearing a crown of thorns on the 2, Native America by a warrior holding a peace-pipe on the 8, and Tibet’s Buddha appears on the 10.

To me the deck isn’t perfect. I don’t think there is a deck that is. Some of the cards bear imagery that confound me, when I try to square them with my familiar notions of what the meaning should be. But this won’t stop me enjoying this deck – a wonderful contribution to the tarot world.

The concept for the Tattooed Tarot is one of Pietro Alligo’s endlessly inventive ideas, and has been illustrated for these cards by Cristiano Spadoni. “Tattoos as symbols painted on skin: reflections of the soul on the body… a symbol that expresses or completes the personality of an individual, stressing the person’s potential and desires”.

The Tattooed Tarot is very consistent in look; both the majors and minors feature scenes with similar layouts - a tattooed human against a fairly abstract background, and an individual tattoo symbol inscribed above their heads. Minor characters wear the same tattoo symbol on their skin as is picture on the card, while the majors have an associated tattoo symbol but the people themselves have the woodcut-look Marseilles trump images on their bodies.

The people in the major arcana have become ‘living emblems’ of the qualities and archetype of that card. While The Devil card is also a modern person with tattoos and piercings, he appears in similar pose to the historical Devil image on the Marseilles card painted on his chest. In other majors, The Fool is a Jim Morrison-like character, wearing a bead and a leather necklace, with the Marseilles Fool and his dog tattooed on his chest and stomach. He has a flower in his hair, bluish sky behind him, and a feather symbol in the upper right corner. The Magician has the infinity symbol over his head, and holds a candle burning at both ends. Strength holds a kitten on her shoulder, and has a breaking column as her symbol. The Devil is very modern – he has a tongue-piercing, a shaved head, a goatee, and wears earrings in each earring, pirate-style.

The 56 minors are also associated with tattoo symbols, and linked to specific parts of the body. The Kings have a tattoo on the nape of the deck, the Aces have it on their forehead, the Fives are tattooed on the stomach, and so on. The minor cards are also very similar in look to the majors, just with a colour shift in each suit. The Chalices are blue-greens, the Pentacles in yellow-oranges, the Wands a kind of reddish-orange and -yellow, and the Swords are in pale blues.

The imagery and interpretations are generated from a combination of body language, facial expression, and the (sometimes rather strange) tattoo symbol that has been linked with that card. There are Chinese characters, cherubs, abstract eyes, cartoon witches, bikies, Jesus with a crown of thorns, pirates, skulls, naked women, Aztec masks – all of the symbolic images that make the world of tattooing. Almost all of the people on the cards are showing bare skin, and have been illustrated with detailed musculature and a close realism as though they were drawn from photos. A few women wear skimpy tops and bits of material, the men occasionally wear a t-shirt. (Imagine a tarot deck designed for a very hot summer, spent by the beach.)

The faces of the cards have black borders, while the backs are mirrored halves with the tiger of the Five of Wands on a psychedelic green and black striped background.

The 64-page multilingual booklet explains the meaning of each symbol, not just the meaning of the entire card (though that is included as well) as a ‘sentence’ meaning.

The Fool – Flower: innocence, sensitivity. Necklaces: eccentricity, frivolity and a pinch of folly. Feather: a care-free spirit, irrationality. Sentence: free yourself of the weights holding back your ambitions, but keep your feet on the ground.

Five of Chalices – A shark devouring a fish: disgust, tears. Loss. Resignation. S: A lie may cause sorrow, pain and regrets.

Pictorially, the Tattooed Tarot is a curious mix of European historical Tarot imagery in a very modern setting, making for one very novel (and occasionally cheesy) tarot deck. I’d advise against beginners trying to read with it, but it could be a deck to offer to male querents in reading situations – it’s not a feminine-looking deck and there is meaning to be drawn from the symbols and the body language.