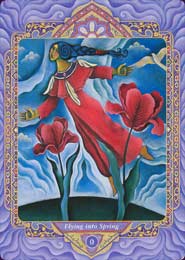 The Triple Goddess Tarot is a decorated and feminine semi-Tarot deck. It has 26 major arcana cards and 7 chakra cards. 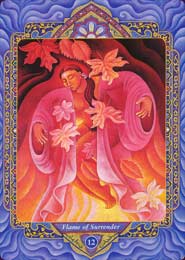 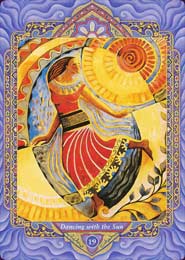 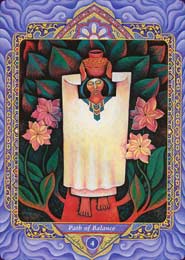 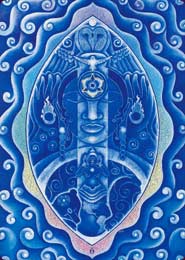 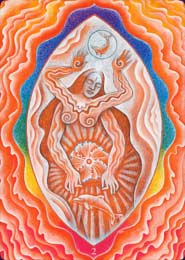 In her foreword, Tarot author/teacher Vicki Noble terms the Triple Goddess Tarot a "synergistic oracle". She acknowledges Isha Lerner as more storyteller than academic in her presentation of history, mythology and Goddess spirituality. I find it a combination of both - one that works for me.

The gist of this book/deck may be well represented by this line from Isha Lerner: "What would life be like if I lived each day as if I were the Goddess?" From there she has gone on to do some serious self work that resulted in a wonderful sharing of information through this deck.

The following are the titles (energies) that this deck assigned to the 22 Alchemical cards:


The aim of the Triple Goddess Tarot is integration of body and soul through the use of archetypal consciousness of the 26 major arcana cards (representing spirit) and the 7 chakra cards (representing the physical self). One of the things that was most impressive about this book was the manner in which the archetypal cards and the chakra cards are used - which is in combination. They are acknowledged as separate systems that work well together.

One of the suggestions given was to draw the chakra cards at random, and place them on the body of the Seeker. In this manner, a wonderful color chart is created showing the chakra system, any blocks and where the blocks may be. As an addendum, it is suggested that random cards be drawn from the 26 archteypal cards and placed along side the chakra cards. A very nice way to allow the Seeker to see this is to take a picture that they may take away with them.

There are several spreads presented that facilitate specific work with these cards:


There is something very special related to a couple of these spreads: the use of the alchemical triangle. Most of us have some understanding of the metaphyscial properties of the triangle. The first inkling that I had that there was a very exciting depth to this was when I got the Wheel of Change Tarot (book and deck by Alexandra Genetti).

It is probably time to actually talk about the cards, eh! OK The cards are 3 1/2" by 5 1/4" - a fairly easy size to handle. The backs are lavender in color, depicting a lotus opening, with the triple Goddess in the center. The illustration is wonderfull well done - but will show the card in reversed position before it is turned over. The 26 alchemical cards show a lavender border, with an inner border of gold leaf, and the Goddess depicted in the center. The title and the card number are in small print at the bottom of the deck.

The seven Chakra cards are color coded to each chakra, and show wonderful depictions of the Goddess in relation to the energy depicted. These last seven cards were an addition to the original 26 cards, and work well with them.

One of my favorite cards is The Chariot, in this deck titled "The Journey Home". The colors used are a muted blue and white. We see a white full moon in the upper left hand side of the card. In the center of the card we see the Goddess depicted flying towards the moon, with hands outstretched. She is accompanied by a dove to her left and to her right, as well as a dove overlaid on her body. The very first thing that I wanted to do was to meditate with this card!

The Triple Goddess Tarot is a non-traditional deck of 33 cards, envisioned as a tool for "living life each day as if I the Goddess", for inspiring imagination, creativity and spiritual growth.

The concept of the Triple Goddess Tarot is from Isha Lerner, a professional astrologer, Tarot consultant and flower essence practitioner, who also created the Power of Flowers and Inner Child Cards. Isha’s personal journey through Goddess mythology is illustrated in these cards by Mara Friedmann.

The Triple Goddess cards honour the Sacred Feminine in her many guises throughout history and mythology: Mother Mary, Isis, Kali, Kwan Yin, Athene, and the Triple Goddess, the three faces of the Goddess, the Maiden, Mother and Crone, all in mystical images that draw you in for contemplation and study. The art is primal, strong with movement and a warm feminine energy. Despite fairly significant outward changes, the mystical core of this deck is Tarotic.

There are 22 major arcana cards:


These 26 cards are collectively known as the Alchemy cards and have a swirling border in purples and a mosaic-like inner border. These cards are a “26 step journey into the mystery and wisdom of the Sacred Feminine”. The other seven cards that make up the balance of the deck are different in style to the Alchemy cards and correspond directly to the seven chakras. The chakra cards can be used with the other cards, or on their own. ( The two types of cards also differ on the backs – they use the same image but the backs of the main Alchemy cards are purple, while the chakra cards are teal.)

The Triple Goddess Tarot book and card set, published by Bear & Co, is also nicely presented in a cardboard box with slipcover. The 248-page companion book outlines the Triple Goddess throughout the ages, and the forms and personification the feminine energy has taken throughout prehistory, agricultural revolution, in fairy tales, in Tarot. Each of the card images is well-supported by the information in the companion book. The Alchemy cards has a quote, traditional name and translation; Alchemy & Transformation: which explains the symbolism and meanings of the elements; Awakening to the Archetype: about the Goddess associated with the card; Everyday Encounters, advice and guidance; Nature’s Healers: the flower entwined in the image and the magical associations, and Your Soul Message: an affirmation to sum up the card. The chakra cards have just a description of the chakra images, chakra attributes, healing essence of the chakra, keywords, and the affirmation.

Previous Tarot knowledge is not at all necessary for these cards, nor is it necessary to use them only for divination. The Triple Goddess Tarot has a strong spiritual and mystical emphasis, and through daily cards or meditation, can also offer wisdom and encouragement for everyday life.

My first thought when I saw the Triple Goddess Tarot was how beautiful it was. As I looked through some more of the pictures available online, I fell in love with it immediately. As I looked closer at the design on the back of the cards, my eyes opened wide and my second thought was, "My goodness. That's a vagina!"

When my new deck and book arrived in the mail, I held onto it jealously until I got back to my car. I packed the baby in his car seat and tore open the packaging as quickly as I could. If not for him waiting impatiently in his baby seat behind me, I would have looked through the cards in great detail immediately. Thankfully, the deck is comprised of only twenty-six major arcana, called Alchemy Cards, and seven Chakra Cards, so I was able to flip through the deck quickly and take in the gorgeous colours and wonderful flowing lines straight away without waiting.

Unfortunately, it only whet my appetite, causing me to steal dangerous furtive glances at the box lying on the passenger seat as I drove on to my destination. Finally, that evening, home again and with my little boy fast asleep, I was able to look through the deck slowly and carefully, reading the names at the bottom of each card, noticing how well they seem to suit the artwork. I looked closely at each face and line and enjoyed the beautiful drawings and symbology within each one: spirals, butterflies, leaves, feathers, lightning, birds and various other animals.

Spirals are also featured in almost every card, often on the palms of hands, and are reflected in the soft curves throughout the whole deck. It gives almost every card such a soft and flowing feel.

The seven Chakra cards, which can be used on their own or as a part of the main deck, are each rendered in their associated colour, forming a beautiful rainbow of colour when they're put in order and fanned. The style of art in these cards is kept with the others despite being mostly monochrome. They don't feel like a separate deck, in other words.

As I looked through each card, I found only one thing which distracted me. 'Song of Creation', number one (thus being the second card in the deck as zero comes first) struck me as being rather different. The colours and the style were slightly jarring compared to the other cards. Don't get me wrong, it's still a gorgeous card, I just personally found it to be a little bit incongruous.

After thinking how lovely the cover art for the book and the box was, I was very pleased to see that the image was contained in one of the cards, 'Dancing with the Sun'. To see the artwork on a relatively larger scale was wonderful. It made me think how amazing the rest of the pieces of work must have looked in their original size and that it was almost a shame to have to see it all shrunk down to card size, even if the cards are slightly larger than the average deck.

I did my first reading with the deck and found it to be a pleasant experience. Never having been familiar with the Goddess mythology, I found the learning curve a bit steeper than it might have been for a more traditional deck, but if not entirely enlightening, with the book in hand, it was at least an informative and definitely interesting reading.

I'm sure that anyone with a deeper knowledge of the Goddess than I, would have a very easy time reading the cards based purely on the images and not ever have to look in the book. Those with no prior knowledge at all, however, will certainly get a lot from the book and the cards used as a pair.

Even if I never do another reading with these cards, which is unlikely, I'll never stop enjoying the amazing artwork.