A man leaves behind eight cups to follow the moon. There are two views on this card. Some view it as a kind of "morning after." In this interpretation, the querent has been indulging, possibly for a while, in luxuries, drink, etc. Or, at least, indulging in what seemed important to him.

Now he has "sobered up" and realized that he wasted his feelings on something or someone who, like cheap wine, wasn't worth it. Like the Lion, he leaves the wild where he roamed free, and seeks the Maiden (the Moon) where there he may not feel so freely, but will gain more from those feelings.


This can be taken literally as a card about the querent sobering up from binge drinking or a wild relationship and realizing that it brought him down, made him seem uncivilized and brutal. Now he wants to do better.

The other view of his card is similar, but less harsh. The querent may genuinely care for these familiar cups (things or people) whether or not they lived up to expectations. A crazy new dream, however, is calling to him, maybe has been calling for a while. His instincts are to follow the dream. But good idea or not (an inverted card might suggest that it's a bad idea or an illusion), he'll need fortitude to do this. It is easy to give your emotions freely to what is known, harder to give them to what is unknown. Yet the unknown is what will likely raise you up to a new level.

In both instances, the card tells the querent that whatever they've been investing their emotions in, it has brought them down, made them less of a human being than they want to be. They need to give their feeling to that that which will en-noble them. This something will not be found in any familiar places. They must have the fortitude to search for it elsewhere.

This can be a card of separation or divorce, or perhaps a spiritual calling. It could also imply a literal move or trip, especially from an established home to a new, unknown one in an unknown land.

Learn the Eight of Cups meaning in reversal in our reversed card meanings. 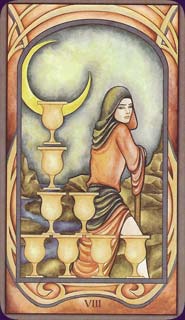 Eight of Cups
in the Fenestra Tarot
See more cards