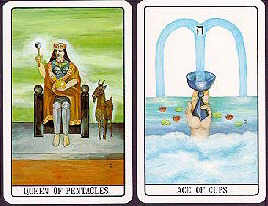 The Order of the Golden Dawn was an active occult society in Europe around ninety years ago which attracted some brilliant people. Their tarot deck was illustrated by Wang under instruction from Regardie, and is a work of esoteric importance rather than aesthetic interest. 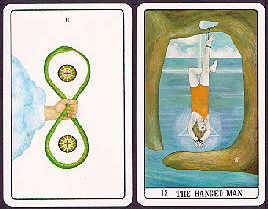 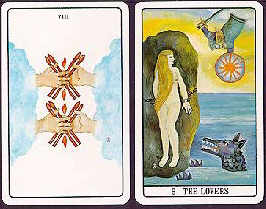 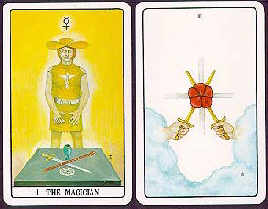 "The Golden Dawn Tarot" is an esoteric deck, based on the systems used by the Hermetic Order of the Golden Dawn. Wang worked under the direction of Israel Regardie, with card interpretations based on those developed by S. L. MacGregor Mathers. In his foreword, Stuart Kaplan notes that the Golden Dawn Society included as its members some of the foremost occultists and writers of its time. As part of their sacred oath, they were sworn to secrecy. Based upon the esoteric notebooks of some of these member, under the guidance of Dr. Israel Regardie, Wang has faithfully produced, in authentic detail, each card in the Golden Dawn Tarot.

Kaplan sees the publication of this deck as an important "missing link" in the development of Tarot. His suggestion is to study this deck along with other decks that evolved from the work of Golden Dawn members, such as the "Rider-Waite Tarot" (by A. E. Waite and Pamela Coleman Smith), the "Builders of Adytum" (BOTA) deck issued under the guidance of Paul Foster Case, and the "Thoth Tarot", by Aleister Crowley and Lady Frieda Harris.

Wang, in his introductory notes, refers to the "Golden Dawn Tarot" as the only truly esoteric deck ever to be published. It is also the only deck to reach public view that was designed for the exclusive use of a powerful secret fraternity. Included in this deck is esoteric symbolism that has been kept shrouded in mystery as part of the Western Esoteric Tradition. As does Kaplan, Wang notes that this is the deck from which some of the greatest esoteric writers of our age developed their ideas about the Tarot.

Wang notes that the basic design of the cards comes from the work of S. L. MacGregor Mathers, following the framework of the Inner Tradition. Credit goes to Moira Mathers, S. L. MacGregor Mathers wife, for illustrating the original cards. Also noted is that after initiation into the grade of "Adeptus Minor", one of the tasks of the adept was to hand-paint a copy of the Tarot deck.

According to Wang, the purpose of the Tarot is to teach - teach about the nature of the universe, and about man's relationship to the universe. Wang also sees the Tarot as illustrating the energies of the mystical system of Qabalah. The use of the Tarot for divination is seen as a means to provide an introduction to the visual patterns and subtle energies of the Tarot. In this respect, the true worth of the cards comes from repetitive usage, which helps to stimulate the unconscious and help develop psychic powers.

One spread is given in the LWB (Little White Book) for use by the reader, and it is simply termed the "Fifteen Card method of Tarot Divination". The spread was specifically developed so that the meanings of the cards could be determined from their relationship to neighboring cards (Elemental Dignities), rather than using reversals. The spread is set out in groups of three, and is not difficult to lay down, or to interpret.

The rest of the LWB is given over to the interpretation of the cards. No scans are used, with keywords only given for each card. From the book:

"0 The Fool. Idea, thought, spirituality, that which endeavors to rise above the material. (If the subject which is enquired about be spiritual.) If the Divination refers to a material event of ordinary life, this card is not good, and shows folly, stupidity, eccentricity, and even mania, unless offset by very good cards. It is too ideal and unstable to be generally good in material things."

"Ace of Wands. Force, strength, rush, vigor, energy. This card governs, according to its nature, various works and questions. It implies natural as opposed to invoked force."

The cards themselves are 3" by 5", of good quality, glossy card stock. The backs have a 1/2" white border, followed by a 1/2" green border, with symbols at the four corners, midway down each side, and in the middle of the bottom of the card. In the center we see a Cross, color coded by element, with a glyph of the Tree of Life in the middle. This graphic alone is well worth study for the symbolism that it contains.

The card face has a 1/2" white border, followed by a fine black border. The titles for the Major Arcana and Court Cards are in black text against a white background on the bottom of the card. The Minor Arcana are not titled. The style of the artwork is somewhat primitive and bare. The coloring is soft, and very basic.

For the most part, the symbols and figures used in this deck will be familiar to those readers using traditional decks. The Fool becomes a small child, plucking fruit from a tree; the High Priestess stands facing the reader, a cup held in front of her with both hands; the Chariot is shown as riding through the sky; the Hanged Man is suspended over water; there is a fire in the background of the Temperance card; yods appear in the sky, under the glyph of the moon, in the Moon card.

All of the suits show a stark white background, with a hand coming out of the clouds, holding the requisite number of suit symbols for each card. The Ace of Wands shows a tri-part wand, surrounded by Yods. Included in the suit of Cups is the use of flowers, as well as fish in the Two of Cups. The suit of Swords includes a red flower in some cards, with red Yods in other cards. the suit of Pentacles makes use of a "living branch" - a branch that shows green leaves, as well as the suit symbol. For all of the suits, Kings are shown on horseback, Queens are shown seated on a throne, Princes are shown driving chariots, and Princesses are shown standing, appearing to be wearing some type of armor.

Each time I use this deck, I see more and more symbolism in it. It is easy to use, would fit well into readings, comparative readings, journaling, story, meditation, ritual, and ceremony. There is a companion book for this deck, written by Robert Wang ("An Introduction To the Golden Dawn Tarot") that is very helpful in working with this deck.

For a student interested in studying the esoteric aspects of the Tarot, for someone looking for an alternative deck to offer their clients as a choice for doing a Tarot reading, or for a Tarot collector, this is a "must have" deck.