Oracle of the Radiant Sun 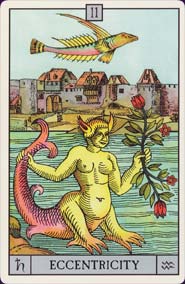 The Oracle of the Radiant Sun is another deck from husband-and-wife team Caroline Smith and John Astrop, who also created the Runic Tarot, Elemental Tarot and Moon Oracle. The 84 cards are based on solar astrology, and are divided into seven suits with old-fashioned and often surreal illustrations.


Card Images from the Oracle of the Radiant Sun 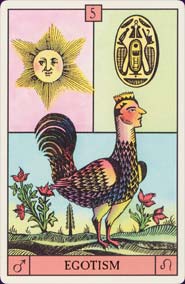 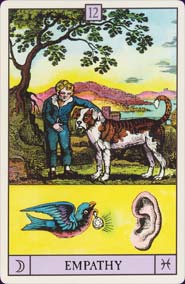 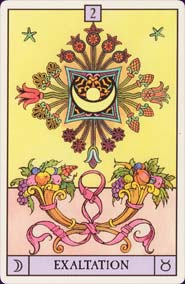 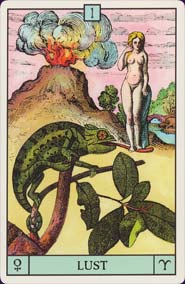 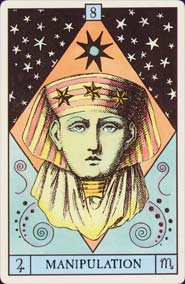 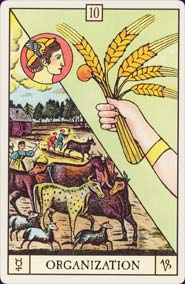 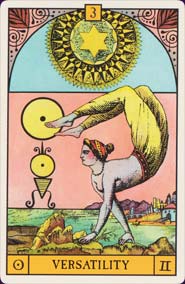 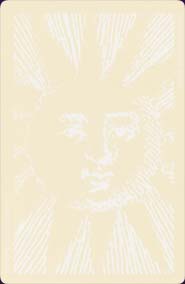 Oracle of the Radiant Sun Review by Chloe McCracken

This very nicely boxed set comes with 84 cards and a 144-page book. Unlike this partnership's other decks, the Moon Oracle, the Runic Tarot (which isn't actually a tarot, but an oracle) and the Elemental Tarot, the images here have a real Victoriana feel to them. The cards are relatively small at 10cm by 6,5cm (4 by 2 1/2 inches), which is a good thing in terms of shuffling, especially as there are 6 more cards than in a tarot deck. The card stock is sturdy and laminated, and the backs are non-reversible, done in a pale beige with a sun face in white.

From the book: "This Sun oracle is a unique system based on eighty-four illustrated cards describing the meaning of the Sun, Moon, Mercury, Venus, Mars, Jupiter and Saturn in the twelve Houses and twelve signs of astrology, and sets out a clear and simple means of remembering and developing the interpretation. As in Horary astrology, the Sun oracle does not use the outer planets Uranus, Neptune and Pluto."

The cards are designed with seven different layouts, to make recognizing the different planets easier. For example, Mercury has a split layout, with different images on the two diagonal halves of the card. The Moon has two images divided into the top two thirds and bottom third of the card. Each card also has a thin white border, black edging, a number representing the planet's place in the wheel of the year in a box at the top, and a planet, keyword and astrological sign along the bottom. Different pastel colours are also used for these symbolic elements, determined by planet - cream for Mercury, grey for Saturn, dusky pink for Mars, pale blue for Jupiter, lilac for the Moon, turquoise for Venus, and yellow for the Sun.

The book gives a fourteen page introduction to the symbols used for astrological signs and planets, and summarises the qualities associated with the houses, planets and signs. It gives clear information on the oracle and the cards, and then has a detailed section for the cards - each card has a page with a yellowed/sepia image of the card, its associated astrological symbols, keywords for the planet and sign, a description of the image, "personal" associations (the longest section, describing the personality of someone with this astrological combination), and "events".

For example, "Sun in Gemini - Versatility. Sun - Fortune, Gemini - Mental Awareness. Image: A talented acrobatic figure walks on his hands in order to impress. On the horizon are the symbol of the sun and the alchemical sign for gold. The star above is another ancient symbol for the sun which is, of course, a star. Personal: The Sun/Gemini person's basic drive is communication, and this card indicates a mind that is quick to catch on to things and has little difficulty in expressing new ideas clearly… Events: A social gathering, impressing other people; the need for a quick decision; an important conversation; reliable information; some contact with the media."

The last twenty pages of the book offer four astrological readings to use with the cards, as well as samples of how these can be interpreted. The first of these is a thirteen card Sun Year Reading with a card for each month of the year, and a final card for the overall emphasis or theme. The next is the Horary Reading, where twelve cards are dealt, but only the cards in the houses relevant to the question are read: "The question asked - 'Will I get the job?' necessitates that we turn face up the cards that relate to the following houses: First House: tells about the questioner. Sixth House: relates to work. Tenth House: the position of career and status. Fifth House: for luck and competition." So, based on the descriptions of the houses at the start of the book, the reader decides which cards to interpret depending on the question asked. The third spread is the Grand Trine Reading, where again twelve cards are dealt, but only the cards in the first, fifth and ninth houses are interpreted. Finally, there is a Cardinal Cross Reading, this time only interpreting the cards in the first, fourth, seventh and tenth houses.

Not knowing much about Horary Astrology, I haven't tried any but the Sun Year spread from the book, but I have also used the cards in other spreads, both astrological (7 planet variations, Jupiter for expansion, Saturn for blocks etc, for example), and non-astrological (anything from a one-card draw for the day to a Celtic Cross). I find the cards work well in any type of reading, and the richly symbolic images are easy to interpret intuitively, as well as having good, detailed interpretations offered in the book. I have also looked at birth charts and drawn the cards associated with each of the planets represented in the deck, according to their sign in the birth chart. This gave a very interesting reading, including interpreting them in terms of the houses in which they are positioned. I can imagine that people with more of an astrological background could think of even more uses for these cards!

As for the cards themselves, as I say they are rich in imagery and symbolism. There are realistic, Victorian-style images both pastoral and urban. There are symbols from Judaism and Islam, as well as Christian imagery. There are elements from Egyptian culture, as well as Greek myths and art. There are some picture-book elements, too, but always within the theme of elements which a Victorian might put on cards. The colours remain fairly pastel throughout, but with a lot of variety.

So, to give a little taster from the book descriptions:

"Moon in Pisces: Empathy. Above, in a charming country scene with a winding river, a child pets a large dog, the two enjoying just being together. Below, a golden-bird ornament symbolizes the spirit image linked to the material - gold. The ear represents an openness to calls for help."

"Mercury in Libra: Influence. The coiled serpent's tongue is the astrological sigil for the planet Mercury. It represents smooth talk, guile, persuasion and temptation. In the first relationship, Adam and Eve walk in the garden, unaware of danger. Beneath the roses, thorns."

"Venus in Sagittarius: Flirtation. A travelling minstrel serenades a beautiful young huntress. The lute symbolizes the pleasure-loving nature of Venus, and the bow the far-seeking adventurousness of Sagittarius."

"Mars in Cancer: Quarrel. Two mounted figures squabble over a gold ring symbolizing betrothal. This image concerns families united or divided over relationships or inheritances. The classical busts glare at each other, reminders that this has happened before."

"Jupiter in Pisces: Seduction. In the centre, the first woman Eve plucking the apple from the tree of knowledge. Before her is the constellation Cassiopeia, associated by Kabalists with the second tarot trump, The High Priestess. Heart and flowers represent the mundane view of love."

"Saturn in Aries: Risk. A boy, worldly possessions over his shoulder, bravely passes a menacing bear. The North American Indian fetish is a protection against danger. A key symbolizes Aries' boldness in opening doors, and a starred tree the fruits of Martian courage."

For some, who are passionate and knowledgeable about astrology, this deck's associations may conflict with their own. However, the imagery is open to many different interpretations, and I don't believe the cards are limited to astrological spreads and usage. And for someone not so well-versed in astrology the Oracle of the Radiant Sun provides useful visual keys to learning and understanding the planets, signs and houses.


Oracle of the Radiant Sun Review by Bernice

There is little I can add to the comprehensive review of this deck by Chloe McCracken, except to say that it has been designed to accord with the William Lilly method of astrology which, over the past six years or so, has quite overtaken previous methods and now has widespread popularity.

This means that the 'outer' planets Uranus, Neptune and Pluto do not appear on the card images. However they are referrenced on page 12 of the book where keywords for the Houses, Planets & Signs are listed. i.e: Scorpio/8th House. Pluto is given jointly with the old time ruler, Mars.

The card images themselves are descriptive of their meanings, and dispite the lack of outer planet glyphs, they do encompass those influences. Even with no astrological knowledge, they can be used to give in-depth readings because the book gives quite detailed information of the astrological combinations in clear every-day language.

My one quibble is with the packaging. Because the card-box is attached to the book you have to cut it away, and then you end up with half a box with no lid. However, if you then place the book on top of the cards and secure the whole with an elastic band, no problem.

As with most decks using an acknowledged system of divination, not everyone will agree with the given meanings. But there is enough variety in the images to adapt them to your personal preferences. I like this deck and shall be using it frequently.


Complete Details of Oracle of the Radiant Sun


Similar Decks to Oracle of the Radiant Sun