The Oracle Tarot is a colourful deck intended to present Tarot in a positive and upbeat manner. The deck has only 64 cards: there are no court cards.


Card Images from the Oracle Tarot 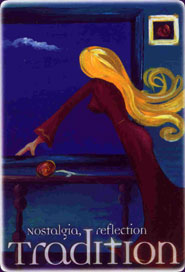 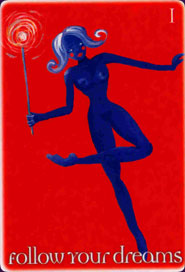 There is a question as to whether this should even be considered a Tarot deck, as there are no court cards. The reasoning on this is that in Cavendish's opinion, the Major Arcana always indicate powerful people in the life of the Seeker, so these would be the cards to look to when attempting to discern "who" is at work in your life. I personally have to disagree, as the archetypes of the Major Arcana play an entirely different role than that of the court cards. For our purposes, we will regard this as a somewhat non-traditional Tarot deck.

The intention of the author was to create a deck joyful, optimistic and very much a part of the modern day world, rather than reflecting the traditional Tarot symbols. The cards are rather large (3 1/2" by 5"), and a little difficult for smaller hands to handle. They are on quality card stack, laminated to protect the cards over extended usage. The box the cards come in is excellent quality, heavy weight cardboard, with the cover lifting straight off. The Major Arcana was in no particular order, while the pips were arranged by number (i.e. all Aces together, all two's together etc), rather than by suit.

The backs are a blue/aqua color, with a series of white stars on them. It would not be possible to determine whether the cards were drawn in the upright or reversed positions. The card faces show a 1/4" white border surrounding the picture. For the Major Arcana, the card title is in silver sometimes at the bottom of the card and sometimes at the side of the card, with keywords, in smaller silver lettering, above them. The Minor Arcana show the card number at the top, in silver lettering, with the keywords in silver along t he side of the card or t he bottom of the card.

This is a vibrant deck, with major usage of blues, greens and yellows. The artwork is somewhat cartoonish, but has a certain flow to it. The figures, except for the male figure in the Lovers card, are all depicted as females. Many of the figures are shown nude, and there is almost none of the traditional symbology that most decks carry. This is a deck that would certainly take one out of the box, Tarot wise, and start them to thinking along new lines.

The Magician certainly brings some excitement into things. The picture is of a young lady, hands in the air, appearing to be dancing with her purple gown swirling around her. In the aqua-blue background we see a series of stars. The keynotes for this card are intuition and taking chances. The ability to manifest is something that any Seeker should be able to perceive from this card!

The Ace of Wands is definitely fiery magic! Against a bright red background, a female figure is shown, with arms outstretched, and a wand with a glowing tip held upright in her right hand. Her left leg is positioned bent in front of her right leg - much like the traditional hanged man posture.

Tradition (the Hierophant) is shown to be a woman, dressed in a long maroon colored dress, leaning over a table and looking out of the window. Her long yellow hair flows behind her as she gazes out into the blue sky.

The accompanying 69 page booklet is very well done. There are charts for both the Major Arcana and the Pips listing the keywords for each card, a small section on why the three Major Arcana cards were renamed, along with some basic information on reading the cards. The spreads presented are the three card Past, Present, Future spread; the Celtic Cross spread; and Cavendish's favorite magical spread of all - reading a card that pops out as you shuffle! I had to laugh when I came across this - and I had to agree with her. The cards that pop out are trying to get a message across to the reader - whether the rest of the reading is for them or not!

Black and white scans are accompanied by a small blurb on each card. Reversed cards are not addressed. From the book:

A new beginning of teamwork. Loving unions, peace and harmony in the relationship. Like-mindedness, easy decisions, and planning for the future together. This is a joyful, loving card that indicates that relationships will run smoothly - with a great deal of joy.

Just because others are dithering does not mean you have to put up with their follies - set your boundaries, cut through the dross, and don't give up when the rewards are so close, and so rightfully yours. Be aware that over-compromising can dilute your vision - and if this is a dream for you, get the team (be it your family, your friends or your colleagues) working together - not infighting and tearing the group apart. This plan will be the fulfillment of a burning desire - you'll regret giving in. With a little time, and some perspective, you'll be glad that you persevered.

You are entering a time when your confidence and abilities will blossom. You may find that you are able to convince people simply, that your skills of persuasion are sharper than ever before, and that you can complete complex tasks with ease and impressive finesse. Revel in the moment.

This deck does what it set out to - it presents the Tarot in an uplifting, positive manner. At the same time, it does not ignore the more difficult nature of some of the cards. Certainly this deck has a place for reading as well as meditative purposes. However, I would not recommend it as a first deck for study, as it does not, for the most part, make use of traditional Tarot symbols.