Tarot of the Haunted House 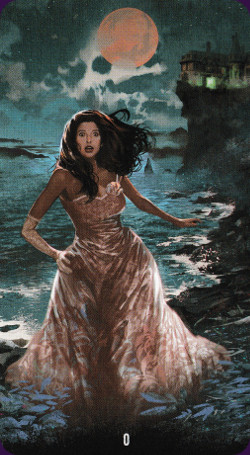 Tarot of the Haunted House is loaded with tropes and archetypes from vintage horror movies and cheesy gothic romance novels. The 78 card deck is structured around the heroine's journey through a mysterious haunted house - and dark night of the soul.


Card Images from the Tarot of the Haunted House 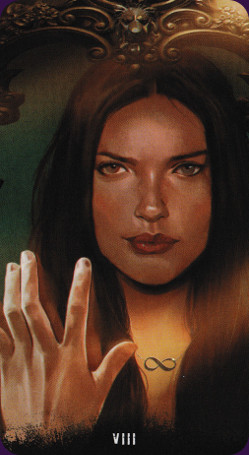 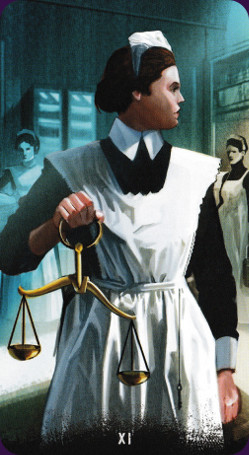 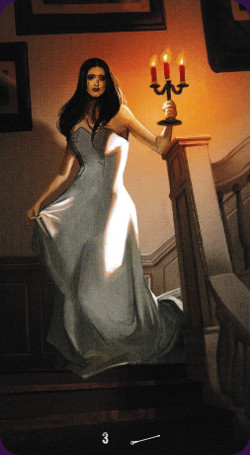 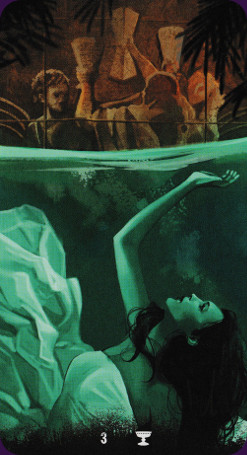 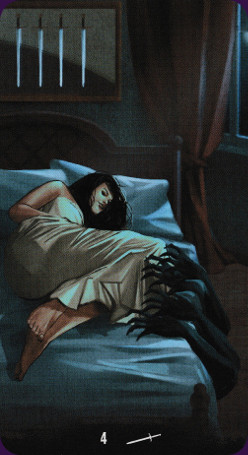 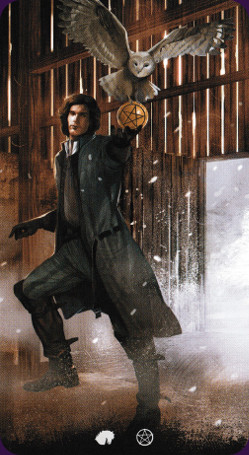 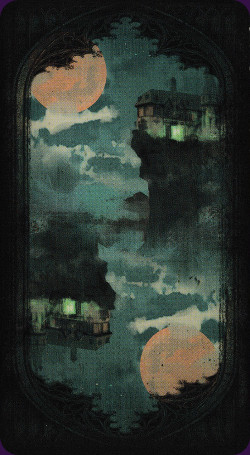 Tarot of the Haunted House Review by medusawink

The Tarot of a Haunted House pays homage to the vintage era of Gothic novels and movies. It visually recalls those wonderfully turgid book covers depicting young women in clingy to non-existent clothing running away from some lurking threat into a storm lashed night. The stories themselves were inevitably set in exotic locales – Caribbean plantations, Southern mansions, and of course, haunted houses. The featured person-in-peril faced off against plotting relatives, sinister suitors, and various agents of the supernatural. Coupled with the story’s atmosphere of tension and terror was always a frisson of romance and eroticism.

This is a 78 card tarot deck, with 22 Major Arcana and 56 Minor Arcana. The Major Arcana follows AE Waite’s choice of titles and ordering, while the Minor Arcana is divided into four suits – Cups, Pentacles, Wands, and Swords. Each suit has 10 number cards and 4 Court cards – Page, Knight, Queen, and King. This deck does not feature titles on any of the cards. The Major Arcana is indicated by Roman numerals, while the suits of the Minor Arcana can be identified by a relevant symbol and Arabic numbers. The Court cards are identified by a pair of symbols – one which identifies the suit and another which identifies their court position – a helmet for a Page, a horse for a Knight, a delicate crown for a Queen, and a chunkier crown for a King.

The cards measure 65 x 118 mm, which is a fairly standard size for Lo Scarabeo tarot cards. They are narrower than many decks on the market, however this actually makes them easier to handle, especially if you have small hands.

The card stock is fairly light and flexible, so if you are heavy-handed or planning on using this deck constantly be warned that it may show signs of wear and tear quite quickly. This deck also shows ‘chop’ marks on the edges of many of the cards ,which were no doubt sustained during the cutting process. These chop marks only appear on the backs of the cards.

The cards have a smooth, satiny finish, which suits the dark atmosphere of the illustrations. The slick finish makes the cards very easy to shuffle - they are not prone to sticking or clumping together, nor are they so slippery that they spray out of one hands at the slightest provocation (or shuffle).

The print quality is up to Lo Scarabeo’s generally excellent standard. The images are crisp, the details clear, and the colours vibrant. There are no misprints, colour bleeds or other accidents of production which mar the images. The artwork by Mirco Pierfederici is done in a modern commercial style yet recalls the equally commercial yet retro imagery of book-cover art from the 1960s and 70s.

These are the illustrations of a confident and capable artist – placement, proportions, and atmosphere are all beautifully rendered to give an overall impression of gothic foreboding. The artists palette is natural yet theatrical, and given the preponderance of night time settings darker colours such as deep, aqueous greens and greys, dusky blues dominate the deck, offset by the gold of candlelight and the reds and crimsons of infernal desire.

The images reach to the edge of the card, there are no borders but for a smattering of darkness at the very base of each image. The design on the back of the cards is reversible. It shows a mirror image of a classic Gothic mansion on a cliff top complete with cloudy night and glowing moon in the background, framed by a cathedral window.

The cards and LWB/guidebook come packaged in a lightweight, close-fitting cardboard box. The box is printed with images from the deck, and some minor publisher’s details. While this box will protect the cards in the short term it is not designed for longevity or heavy handling.

The 64 page little white book contains instructions in English, Italian, Spanish, French, and Portuguese. This is among one of the more interesting LWB’s in that it opens with a narrative that places the reader squarely in the middle of an unfolding Gothic drama. This segues neatly into a brief introduction to the tarot, and a short description of the inspiration behind the deck.

Each card has a traditional title as well as a ‘Haunted House’ title which introduces the character or situation depicted in the artwork as part of an ongoing story. So, in the Major Arcana, for example, the Fool is also known as Raven Wandsworth, the Protagonist; the Magician is also The Butler Holds the Key, The Chariot – A Strange Show Further Opens the Door, and so forth. In the Minor Arcana each card has an alternative title which is part of the greater narrative of the deck, however these titles tend to be short and far less descriptive – Ace of Cups is alternatively titled The Opening, Two of Cups – The Romance, Three of Cups – The Intoxication… You get the idea.

Each card has a brief description of what is taking place in the image and its part in the overarching storyline. The divinatory meanings are given as keywords, and are, for the most part, fairly close to Eden Grey’s classic tarot interpretations. There is the briefest of instruction on how to read the cards, and two layouts are included in the booklet. The first layer is your standard three card draw, the second an eight card layout with instructions on how to use it in every language but English.

This deck is enormous fun, bristling as it is with all the tropes and conventions of every gothic romance novel and Hammer Horror movie in existence. If you are looking for a shadow deck then this might also be the tarot for you – while the divinatory meanings are not steeped in negativity, the images are certainly dark-old-housey enough to satisfy most dark-side interests.

If you are looking for a tarot with a delicious sense of post-modern irony, or one steeped in sly references to pop culture then this is a great place to start stop while not recommended for absolute beginners, due to its idiosyncratic and particular art, those with a little experience (or a lot) in reading the tarot will find this deck easy to adapt to and use. Make no mistake, while this deck may be highly entertaining it is also a fully functional, well thought out tarot.


Complete Details of Tarot of the Haunted House


Similar Decks to Tarot of the Haunted House