Under the Roses Lenormand 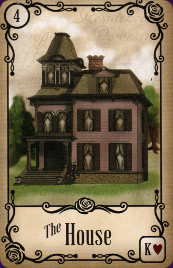 Under the Roses Lenormand is a gentle petit Lenormand deck with Edwardian-style imagery. There are the standard 36 cards, plus extra Child, Gentleman and Lady cards. Previously self-published, it's now in print from US Games.


Card Images from the Under the Roses Lenormand 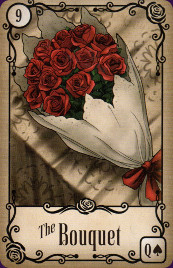 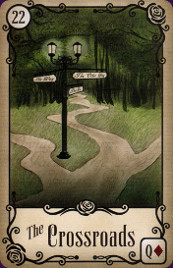 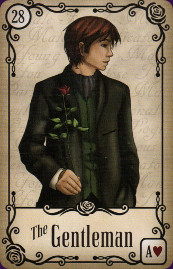 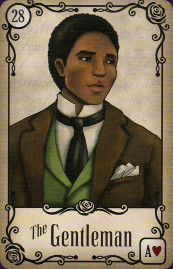 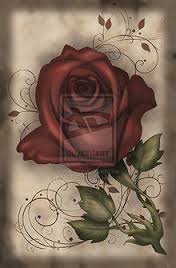 Under the Roses Lenormand Review by Bonnie Cehovet

This is one of three editions of the “Under the Roses Lenormand”. The first two were self-published, with the first edition having keywords printed on the cards, and the second edition being printed both with and without the keywords. There was also a mini version issued. Each self-published deck was printed in runs of 100, and are now OOP (out of print). The edition that I am reviewing, from U.S. Games Systems, Inc., shows the card titles at the bottom of the card, with keywords worked into the imagery. Quite frankly, I had a difficult time finding the keywords in the imagery.

“Under the Roses Lenormand” is comprised of 36 images based on the Petit Lenormand, along with alternate images for Child, Gentleman, and Lady (one based on European ancestry, one based on African ancestry). In the introduction we learn that “under the roses” is a euphemism for buried secrets (from the Latin phrase “sub rosa”). In classical Roman times the rose was the symbol for confidentiality and secrets. Heaven knows there are secrets that can come out in a reading! The deck comes with a 55 page LWB.

Note: In general, the Lenormand oracle cards originated with Mlle. Lenormand, a well-known card reader who died in 1843. The Petit Lenormand was named for her, and published not long after her death.

The images in the Petit Lenormand are used to identify past, present, and future influences in the Seeker’s life. As an oracle, this deck can be used for any issue or topic, by any and all levels of reader. The cards are 2 Ľ” by 3 ˝” – perfect for smaller hands like mine, but still able to be used comfortable by individuals with larger hands. The card back shows a sepia toned background, with a blood red rose in the center, complete with a thorny stem and green leaves. The card faces show a sepia toned background and border, with minimalist imagery. The card number is in the upper left hand corner, with the equivalent to the card from a regular playing card deck. For example … The Rider is Number 1, and is equivalent to the 9 of Hearts in a regular playing deck. The card name runs along the bottom of the card, against a white background. The upper right hand and lower left hand corners show a small rose illustrated in black. A black vine connects the four corners.

The LWB presents the keywords for the cards only … no image is shown. The keywords are taken from various Lenormand traditions. It is suggested that if a reader is used to using a specific Lenormand system, that they continue to do so with these cards.

The LWB discusses how to read the cards, noting that they are read analytically, rather than intuitively. In getting ready to read the deck, it is noted that only 36 cards are to be used, so the reader will need to determine which version of the alternate cards to use, and set the remaining three aside. The cards are meant to be read in combination, so their meanings will change depending on the cards they are paired with.

Spreads include a Two-Card Combo, a Three-Card Combo, a Five-Card Line, a five-card Under The Roses Spread, a Nine-Card Spread, an 18 card Petit Tableau, and a 36-Card Grand Tableau. Advanced techniques are discussed at the end of the LWB.

The place or family in which one is most comfortable.

A wish come true, or a gift received.

The Crossroads (Number 22, the Queen of Diamonds) shows a night scene, with a path branching off in three directions, with a black pole in between two of them, with two lit lanterns on top of it. Keywords include Choices, Way, Decision, Options, Journey, Wandering, Plans, Idea, Destiny, Directions, Alternatives, Escape, Route, Junction, Cycle, Divided, Torn, Plots, Free Will.

A decision to be made, or a direction to take.

This is a very gentle deck, with a nice, Edwardian feel to it. The art is minimalist, and is held together by the sepia tones. Several cards use the rose imagery, including The Bouquet. The Gentleman, The Lady, The Cross, The Sickle, The Dog, The Garden, The Locket, and The Ring. Whimsical cards include The Bear (which features a brown bear, standing, with a fish in its mouth), The Key (which shows a female hand about to unlock a door), The Owls (which shows two Owls on a branch), The Child (which shows a young girl chasing butterflies with a net), and The Dog (which shows a dog sitting, with a rose in its mouth).

I would feel comfortable offering this deck to clients of all backgrounds, and all ages.


Under the Roses Lenormand Review by Mythic Silence

The Under the Roses Lenormand is a 39 card Lenormand deck by Kendra Hurteau and Katrina Hill. It was originally self-published by the authors, and the mass market version of the deck is now being published by U.S. Games Systems, Inc. The cards measure 3.5 x 2.25 inches.

The cards in this deck are sturdy and easily manageable for shuffling. Their size makes them suitable for larger spreads, especially when space is at a premium. The deck resides in a simple tuckbox, but it’s a sturdy specimen that doesn’t allow any jostling of the cards when they are inside with the booklet. The only drawback is that it can be difficult to close the tuckbox without creasing its flap, rumpling your booklet, or sticking the flap between two cards due to the tight fit. The compact design does make this deck a highly portable choice for those who like to keep cards on hand when they are out and about.

The little white booklet’s modest appearance is deceptive. It skillfully packs a lot of information into a small space. It includes the basic information you need to start reading Lenormand, plus extra tips and an introduction to more advanced techniques, such as the use of houses and knighting. The authors state that the keywords for each card are pulled from several traditions, including the Belgian-Dutch, French, German, and Swiss-German. There are also additional keywords unique to this deck, which creates a healthy list for each card. This is an impressive feat for a 55 page tuckbox booklet!

The artwork for this deck is distinct, straightforward and attractive. The color palette is soothing without looking dull. I like the balance of soft backgrounds with clean outlines on the figures and objects. It gives the deck a very polished look and makes the simplicity elegant instead of stark. The rose that adorns the back of these cards is lovely, and I appreciate how much care went into the design of this often overlooked aspect of a deck. After all, the one illustration that you and a querent are guaranteed to see in every reading is the one on the back of the card.

Keywords for the cards are written in a faded script in the background of the images. In some illustrations they are barely visible, and in others they are a bit distracting. This is one artistic detail that I feel detracts a bit from the visual appeal of the deck. The card’s number and playing card association are incorporated into the border and do not intrude into the illustrations. This design keeps the systematic references handy, yet inconspicuous. The captions are rather large, but the font is easy to read and it complements the style of the deck.

One of my favorite details about this Lenormand is the extra gentleman, lady, and child cards. Significator cards play an important role in the Lenormand, and I think being able to choose a significator that you can relate to is an important part of connecting with the reading.

The deck sticks to the Lenormand tradition, but utilizes new ways to illustrate the symbols for several cards. For example, the book is called “the journal” and features a young lady penning down her thoughts. These slightly altered cards are easy to identify, customized to suit the theme of the deck, and they bring a refreshing look to the traditional imagery. I think this strikes an important balance between staying true to the system of the Lenormand and bringing something innovative into the cards.

The Under the Roses Lenormand is a lovely deck for both beginners and experienced users of the Lenormand. The cards adhere to the traditional system while offering a fresh art style. The extra significator cards are a great addition, especially for those who read professionally for a diverse clientele. I highly recommend adding this deck to your collection!


Complete Details of Under the Roses Lenormand


Similar Decks to Under the Roses Lenormand

Home > Decks > Under the Roses Lenormand