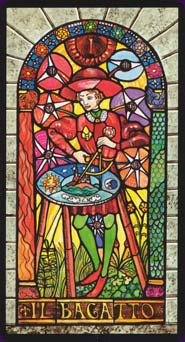 The Tarocco delle Vetrate is a stunning, gloriously coloured Tarot from Luigi Scapini, artist of the Medieval Scapini Tarot and Shakespeare Tarot. The minors are generally pip-style cards, but some are very scenic. Though the cards have Italian titles, the companion booklet has a section in English. 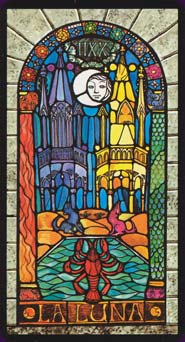 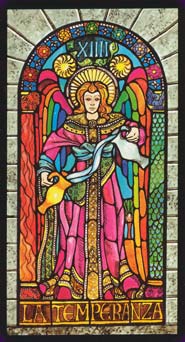 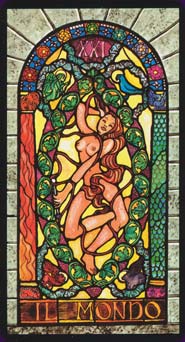 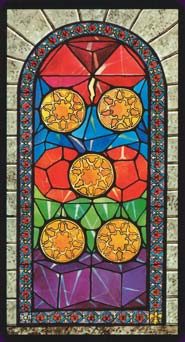 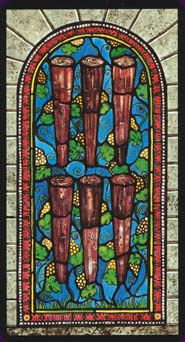 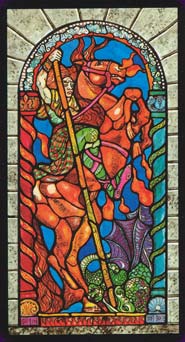 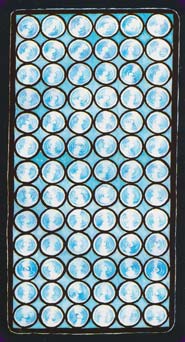 I've become a bit of a Scapini buff of late, collecting a few of his decks and having my eye on two more. What I like about him is that while he is highly accomplished, his style in all of the decks that I've seen is completely different to each other, he has no stylistic "fingerprint" as - say - van Gogh had, or Titian. Each of the decks that I've seen is executed in a particular style which is consistent throughout the deck, and each of them is appealing in its own way. Before I get started, I'd like to get a major criticism out of the way: the LWB is hopeless. In fact, all the Scapini LWBs that I've seen are - he doesn't seem able to talk about his image without a) aggrandisement and b) total nonsense. Of course, he is an Italian - this fault may lie with the translator. If he is bilingual and translates his own LWBs, he desperately needs to invest money in paying someone with better English to do it for him. Thus, this deck would never do for a beginner: you couldn't teach yourself or learn about the feel of a given card from the enclosed literature.

That out of the way, this is an appealing deck. It is not widely available although it is in print: I spent over two years searching for it, putting in orders at new age shops and bookshops, to no avail. Eventually I got hold of it through a specialist Tarot online service, and I've never regretted it. I thought I would like it: I like stained glass, I like looking at views through windows generally, I like sandstone buildings. As I knew in advance that each image was going to be presented in the form of an arch-shaped image inside sandstone blocks and in the luminous colours of stained glass, I knew before I ever saw it that I'd love it for those reasons, and I was right, it is very visually appealing.

Throughout the deck, the colours are luminous and liquid, coming as close as pigments on cardboard are going to be able to come, to creating an impression of light through coloured glass while still being rich and at times dark. I mentioned each card is bordered with a sandstone arch: when examined, these are not individually drawn but mass-produced. There are kabbalistic undertones to this deck: eack of the Major Arcana decks are framed within that frame with two Pillars, a Fiery Pillar of Severity topped with a lion on the left and an aqueous Pillar of Mercy topped with a rather overweight pigeon on the right. Each of the Minor Arcana suits has its own inner border, too, of a largely abstract form chosen in colours that have an association with the element. This suits the one unifying charactieristic of all of Scapini's decks that he likes to work in a strongly vertical form: narrow, tall cards with narrower taller images within them.

Kabbalistic undertones are offset by Christian undertones, nowhere more obviously than in The Star: The Star Herself is doing what Stars everywhere do: playing naked in the pool with most of her Personal Bits covered with improbable hair, but in the background are three richly robed men on dromedaries, and above them, the eight-pointed Star in the sky has a little baby boy at its centre. Jeez, Luigi, ram it home that you're a Christian, why don't you! [note for Solandia: feel free to delete that last sentence if you feel it's too strong.] The pip cards are unillustrated in any Rider-Waite sense of the term this deck, but they are lavishly "decorated" or thinly illustrated anyway, and I find them quite acceptable to scry in. Some of them are perfect, for example, the Ten Pentacles has little castles growing out of each of the Pentacles indicating wealthy housing. Some of them are rather surprising if not imperfect for traditional meanings: the Two Cups, usually in my mind a card of anticipation and pleasure, is liberally decorated with running tears, and the Four Swords, which I associate with healing by taking oneself out of the situation, have much more a Three Swords energy, in my opinion, because the four swords all pierce a bird in the centre of the card. I suppose it is up to the reader to decide whether they are going to go traditional and teach the deck those meanings, or whether they will follow the imagery of the deck and see pain in Four Swords and grief in Two Cups.

Some images are more like stained glass than others. In fact, I detect a slight movement away from stained glass the further into the deck you get: the Fool could easily be leadlighted together just as is (and the jagged straight lines of the Tower lend themselves to it spectacularly as well) but later in the Major Arcana and in much of the Minor Arcana the shapes and areas of colour become more fluid and less like glasswork while still keeping the language of glowing light-infused colour. Talking about hte Tower: it's worth describing: a thin, Gothic-like cathedral is being struck by a yellow lightning bolt held by a red hand (God in a rage?) There are no human figures at all, but there are two human-shaped statues being toppled by the blast. the Cathedral has plenty of Celtic knotwork but no crosses anywhere. In the background, there is some semi-abstract building that looks much less wealthy being smitten as collaterial damage: it had a chimney and a crazy angle to it, and reminds me of nothing so much as the interesting animated skyline in a cartoon series called "Angry Penguins" which I used to watch when I had a toddler in the house. Even the very sky itself is shattering like broken glass with the impact of the explosion, but the Pillars of Severity and Mercy stand tall, calm, serene, untouched in their purity.

There are other cards that deserve individual mention. Hell, they all do but I have to pick and choose. The Knight of Cups is a very interesting fellow: His horse, unpanicked, is high-stepping carefully away from the observer, still bearing a bedroll and a barrel presumably of wine but happy not to have the heavy fellow in his back: the Knight himself, dressed in blue, is hanging upside-down behind the horse, the reins tangled around his ankles, a silly drunken expression on his face, his eyes shut and obviously half-conscious at best, but using all his personal resources to keep his Cup, brimming with red wine or port, upright. I spent several years with an alcoholic, and this card rang alarm-bells as soon as I saw it: someone gone in addiction *will* use their last reserves to prevent any kind of spillage even as they are getting hurt or losing other resources. This card very quickly became a warning-bell in this deck of behaviours or pleasures in danger of getting out of control (or already out of control). In the Ace Cups, the ornate turned stem of the goblet very cleverly is the obverse of the profiles to two inward-looking faces.

Justice has her eyes wide open and knowing, a faint smile of welcome - or is it recognition? on her face. There is a ladder stretching from our feet to her neck: she is approachable, in fact, she *must* be approached, she demands it. I fully intend, when I have the time and clarity (and I've fixed up some Justice issues in my life!) to do a meditation and approch her in this card, along that ladder. I want to know what she will say to me. The Pope looks more like a man of Earth - the Emperor - than a man of God. He is trying to be too powerful in the here-and-now, leaving a void which the Hermit, wearing a Papal headdress and regalia, is filling. This leaves the role in the Tarot of a solitary mystic directly communing with Spirit without any of the robes or offices or pretenses, sadly lacking. Perhaps Scapini saw that lack in 21st century life. Perhaps, sadder still, he didn't.

Strength, numbered XI in this deck, has the lemniscate hat, which is good to see, and is doing something very unusual and rather erotic: she is dancing belly-to-belly with the upright lion, her fingertips erotically inserted between his soft lips. You can see their bodies moving together, you can almost hear the soft Sinatra-like music.This is no struggle. The Ten Rods is clever in that stems from each of the rods go into the centre of the card where they meet up in a Cup, one element containing within it the germs of its opposite. This would have worked better for me if the same thing had happened to the other three Aces.

My overall impression? I love this deck, and recommend it as a worthy addition to any collection, though probably not as a first deck or a teaching deck. I love some parts of it better than others, though. In public readings it works really well, and tends to appeal to people of above-average education. I haven't done any private meditations with any of the cards yet, but there are several that are beckoning to me...