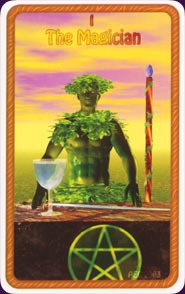 The WorldTree Tarot is a complete digital deck of 78 cards with full colour 3D computer graphics. The symbology is more or less in the Rider-Waite tradition.


Card Images from the WorldTree Tarot 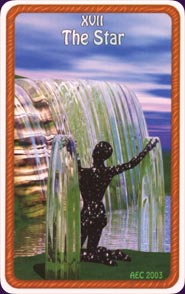 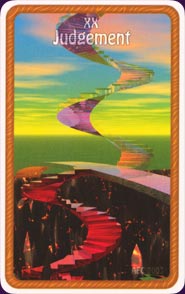 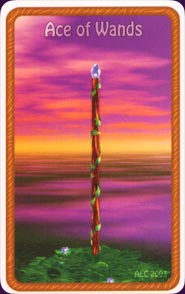 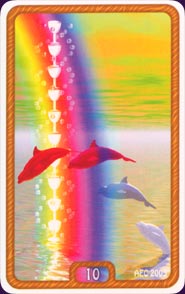 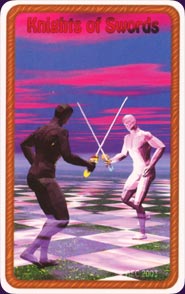 The WorldTree Tarot began as an exercise by the artist, Ann Cass, in learning graphics software. Ann chose to create a Tarot deck because of her many years of reading experience, and because seventy-eight images would give enough scope to learn the software adequately.

As you’d expect, the art of the WorldTree Tarot is computer-generated. I don’t generally like this style of 3D art - preferring detail, natural landscapes and real-looking people - and wasn’t sure if I’d engage with the cards, but I was pleasantly surprised. The card colours are deep and varied; the human figures are fluid beings without hair or clothing. The men and women are translucent, coloured in geometric patterns, contrasting with their background or reflecting it. They are muscled and healthy with distinct silhouettes, but there are no ethnic or status indicators of hair or clothing. The symbolism is superficially based on the Rider-Waite-Smith, but some departures have been made from its esoteric and medieval symbols.

The cards are printed on stiff and not overly glossy stock with very rounded corners, which shuffles well and doesn’t slide off the table. This edition is roughly the same size as playing cards, but there is also a miniature edition with cards less than 4 x 6 cm. The backs are attractive, with a mirrored design of the World Tree on a blue to white blended backgrund. The majors have standard titles; the suits are Cups, Wands, Pentacles and Swords; and the court cards are Page, Knight (or Knights, in the case of Swords), Queen and King. The titles of the cards are printed over the base or top of the scene in white or transparent print. This is a nice effect: the titles are readable but not obtrusive and do not detract unduly from the scene.

Of all the cards, the Wheel of Fortune was my favourite. The four quadrants of the cards are represented by a tree, one corresponding to each season. I also liked the Wands suit as a whole because of its attractive colouring (green foreground and blue sky with white clouds). Its series of human figures are well-positioned to indicate the card’s energy, and are full of movement. The Cups suit also used an interesting device to indicate positivity in the cards. The cups in the scenes of the Ace, Two, Three, Nine and Ten of Cups were all bubbling gently. In the Four of Cups and Eight of Cups, the majority of cups are still while just a single one bubbles. I particularly liked the Ten of Cups card; it’s a very happy looking card featuring a rainbow and four leaping dolphins.

The WorldTree Tarot deck is a packaged with a booklet which contains only meanings for the cards (because of space and printing limitations). Each card has a paragraph of upright and reversed meaning, which are intended to be used a as a starting point for your own meanings. A fuller version of the booklet, with artist’s notes on the cards, is also available for free on Ann’s website.

I didn’t think at first the WorldTree Tarot would be my preferred kind of deck. Instead, I found its cards to be professional in production, as well as effective in readings both for myself and others.